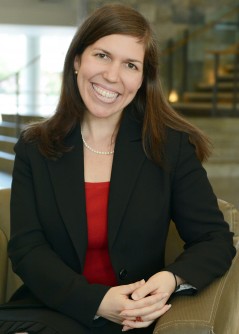 The high court’s decision, expected in June, will determine next steps in two same-sex marriage cases in Arkansas and seven nationwide.

FAYETTEVILLE, Ark. – University of Arkansas law professor Danielle Weatherby, whose research focuses on the First Amendment and emerging legal protections for transgender individuals, is monitoring the U.S. Supreme Court in its process of deciding the legality of same-sex marriage. Justices heard oral arguments Tuesday and are expected to make a decision sometime in June.

Weatherby noted that it is difficult to predict what the Court will decide, but said indicators can be found in the dialogue and progression of questions posed by the justices.

Relying on a transcript and recording of the oral arguments, including justices’ questions for attorneys on both sides of the case, Weatherby quickly wrote a summary and preliminary analysis of what she described as a “fascinating” session.

The Supreme Court is considering two questions: Does the U.S. Constitution require states to issue marriage licenses to same-sex couples, and must states recognize same-sex marriages performed in other states where they are legal?

Weatherby’s report underscores the justices’ typical gravity in their approach to the issues brought before the court. On the first question, she said, all justices, with the exception of Justice Clarence Thomas, asked the representing attorneys about the institution of marriage, the way in which marriage bans affect equal protection of the law for gays and lesbians, and whether the fundamental right to marry includes same-sex marriage.

“All of these questions have been at the core of the hotly debated issues litigated in the state and federal courts,” Weatherby said.

Many of the justices’ questions focused on the traditional notion of marriage and its historical and even anthropological definition as a union between one man and one woman. However, 82-year-old Justice Ruth Bader Ginsburg, whose comments during the session have already been recognized as placing the issue within the context of strengthening and expanding civil rights in the United States, emphasized the shift in marital dynamics over time from a dominant-subordinate relationship, in which the husband made all the important decisions, to a modern, egalitarian relationship.

“You wouldn’t be asking for this relief if the law of marriage was what it was a millennium ago?” Bader rhetorically asked one of the plaintiffs’ attorneys.

Weatherby pointed to one interesting development that could indicate the direction the court might take on the first question. During the hour-long discussion on the second question – whether states must recognize same-sex marriages performed in other states – Justice Anthony Kennedy, whom many believe is the swing vote in a closely divided court, asked only one question. Weatherby said his silence could indicate that he believes the Supreme Court will decide affirmatively on the first question – that the Constitution indeed protects same-sex couples and requires states to issue marriage licenses to them – which would essentially make the second question moot.

Nationwide, in addition to the cases currently before the U.S. Supreme Court, there are seven same-sex marriage cases pending in the various levels of state and federal courts. Two of these cases originated in Arkansas, one of which has reached the Arkansas Supreme Court and the other the Eighth Circuit U.S. Court of Appeals in St. Louis.

However, if the plaintiffs in the Supreme Court case either lose or prevail on only some of the issues, questions of state law could remain.

“In this case,” Weatherby said, “because it is the supreme authority on state law, the Arkansas Supreme Court may ultimately have to speak on the issue of same-sex marriage.”