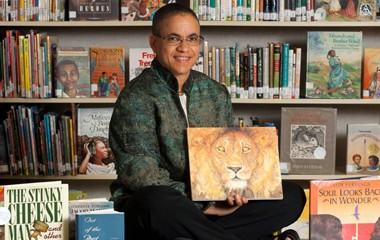 Newswise — An African-American woman who was inspired by the stories she heard from storyteller and children’s literacy pioneer Augusta Baker has been named the first holder of a chair in Baker’s honor at the University of South Carolina.

Part of a Children, Libraries and Literacy Initiative of USC’s School of Library and Information Science, the chair honors Baker, a beloved children’s librarian and storyteller who made South Carolina her home after a 37-year career at the New York Public Library. She served as USC’s storyteller-in-residence for 14 years.

Martin said the appointment is special to her on many levels.

“I knew Augusta Baker as a child and heard her tell stories,” Martin said. “I have relied on her groundbreaking work for my own academic research. She has been a really important name to me for a long time, and because this chair is about outreach and building programs to help stamp out illiteracy in South Carolina, it just seems like a perfect fit.”

Charles Bierbauer, dean of the College of Mass Communication and Information Studies, says Martin’s scholarship and commitment to service, combined with her engaging personality make her the right choice for what he calls an essential quest.

“Dr. Martin, in addition to her impeccable credentials, brings a sense of excitement and engagement we think will be contagious for all working with us in this essential quest to foster children’s literacy,” Bierbauer said.

Announced in 2005, the Augusta Baker Chair is the first endowed chair in the Palmetto State named for a black female.

Dr. Samantha Hastings, director of USC’s School of Library and Information Science, says the chair is more than a salute to children’s literacy and honors one of the great librarians of the 20th century.

“Augusta Baker understood the importance of reaching children early, igniting their imaginations and keeping the lamp of literacy shining on them,” Hastings said. “Dr. Michelle Martin also understands how important it is to reach children early and keep them engaged in the joy of reading. She has the energy and talent to help us develop a deeper understanding of how our outreach programs like Cocky’s Reading Express™ impact the academic performance of students.”

“On a larger scale, Dr. Martin will help the university and the state tell the story of how literacy contributes to economic development and help South Carolina’s next generation of children who are articulate and able to read reach their full potential,” Hastings said. “We are fortunate to have Dr. Martin as a partner in our quest to eliminate illiteracy in South Carolina.”

Martin says she will work to enhance literacy programs through greater coordination and less duplication.

“Many literacy initiatives already exist within our library school at USC and in the public and school libraries throughout South Carolina,” Martin said. “It is my goal to create an umbrella that will serve as a clearinghouse for those initiatives so that we can enhance, not duplicate, our literacy efforts.”

At USC, Martin will continue teaching children’s and young adult literature courses. Among the courses she has a particular affinity for are ones on The Picture Book, The Newberry and Caldecott awards, the Coretta Scott King Awards and Ethnicity and the Child.

Meanwhile, Martin says she plans to finish her current project, a book on the little-known children’s literature of Arna Bontemps and Langston Hughes, next year.

Martin graduated from the College of William and Mary in 1988, where she earned a Bachelor in Arts degree in English literature. She earned a master’s degree in Outdoor Teacher Education from Northern Illinois University and a doctorate in English from Illinois State University. She has written extensively on African-American children’s literature. Her book, “Brown Gold: Milestones in African American Children’s Picture Books 1845 – 2002” drew from the James Weldon Johnson Memorial Collection of African-American children’s books, which Augusta Baker established in the Countee Cullen branch of the New York City Public Library.

Martin says she looks forward to returning to her hometown of Columbia, where she attended Greenview Elementary, Fairwold Middle and W.J. Keenan High School with Baker’s grandchildren, and to giving back to the community that gave her so much, including her defining verve and work ethic.

“You bloom where you are planted, and you give back wherever you can,” Martin said. “That ethic has followed me from my days as a naturalist at Sesquicentennial State Park in the early 1990s when I led programs for Greenview Elementary students, through my academic career. I love the idea of coming home and being able to give back to the community out of which I came.”

About Augusta BakerA native of Baltimore, Md., Augusta Baker was born April 1, 1911. She earned a bachelor’s degree in education in 1933 and a bachelor’s degree in library science in 1934 from New York State College (SUNY, Albany). Baker worked in the New York Public Library system for 37 years before retiring to South Carolina in 1974. At the NYPL she was a children’s librarian and a storytelling specialist and later coordinated children’s services. She served on the ALA Executive Board and was active in many organizations, including the Association of Library Service to Children and the South Carolina Library Association. In 1980 Baker was named USC’s storyteller-in-residence, a position she held until she retired from the university in 1994. Baker died on Feb. 23, 1998, but her legacy remains in the hearts of generations of children and her founding of the James Weldon Memorial Collection of children’s books at NYPL and the Augusta Baker Collection of African-American Children’s Literature and Folklore, in USC’s Ernest F. Hollings Special Collections Library.

“Augusta Baker is “one of the rare commonsensical, mischievous, ranking library goddesses in our Pantheon…” ~ Lillian N. Gerhardt, former editor-in-chief, The Library Journal

“Her credentials and commitment were instrumental in shaping and setting directions for the publication of books for and about African-American children long before the term ‘multicultural’ was conceived and became current.” ~ former coordinator of children’s services, New York Public Library