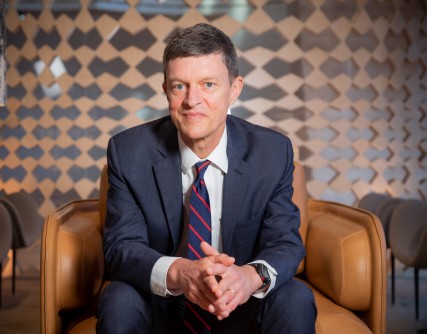 Newswise — KINGSTON, R.I. -- April 12, 2021 -- The Board of Trustees of the University of Rhode Island has announced the selection of Professor Marc B. Parlange, provost and senior vice president of Monash University in Australia, as URI’s 12th president. He will succeed David M. Dooley, who joined URI in July 2009 and has overseen the transformation of URI into a leading research institution with a growing recognition of programs of distinction. Parlange’s appointment is effective Aug. 1.

Born in Providence, Rhode Island, to parents who emigrated from France and Ireland, Parlange will leave Monash, a public university based in Melbourne, Victoria, Australia, with an enrollment of more than 85,000 undergraduate and graduate students. He will take over Rhode Island’s flagship public research University with its approximately 17,000 undergraduate and graduate students, a budget of more than $800 million, four campuses and a global reputation for excellence in coastal and ocean sciences, environmental and ocean engineering, health care and health sciences, chemical and forensic sciences and cybersecurity.

Prior to joining Monash, Parlange was dean of the Faculty of Applied Science at the University of British Columbia in Canada. Previously, Parlange served as dean of the School of Architecture, Civil and Environmental Engineering from 2008 through 2013 and as director of the Institute of Environmental Engineering from 2004 through 2007 at the École Polytechnique Fédérale de Lausanne (EPFL) in Switzerland. He has also held research and teaching appointments at Johns Hopkins University and the University of California, Davis.

Parlange is recognized internationally for his expertise in environmental fluid mechanics. His wide-ranging research in hydrology and climate change addresses a number of important issues, such as heat transfer in cities, energy dynamics in hurricanes, and water resource challenges in remote communities, particularly in West Africa. He has a master of science degree and Ph.D. from Cornell University and a bachelor of science degree from Griffith University in Australia.

The University of Rhode Island Board of Trustees formed a Presidential Search Committee last fall, and met throughout the winter to review applications and interview candidates. A Search Advisory Committee was also created last fall and community forums were held that helped to create the Presidential Profile, which outlined expectations, priority opportunities and challenges the next president should be prepared to address. Parlange was selected from more than 200 applicants seeking to serve as the next president of the University.

The presidential search was built on four guiding principles that Dr. Parlange exemplifies,” said Thomas M. Ryan, chair of the Presidential Search Committee and member of the Board of Trustees. “He is an accomplished, visionary leader who has focused on student success and experience. During his career, he has advanced global scholarly research, navigated financial challenges, built strong industry partnerships and developed a depth of experience in creating more diverse and inclusive communities, especially for the most historically marginalized members of our society. Dr. Parlange’s leadership will accelerate the University’s already impressive trajectory. We found a champion for all faculty, staff, and students, a president who can lead the University toward another transformational decade.

“We were fortunate to have a wide and deep pool of extraordinary candidates, which is a credit to the leadership and vision that have transformed URI during the past 12 years and the incredible dedication and bold agenda of President David M. Dooley, and our faculty and staff,” Ryan said.

The search committee voted unanimously to recommend Parlange as the top candidate at its April 1 meeting. The recommendation to the full Board of Trustees was also voted on unanimously to appoint Parlange as URI’s next president at its Monday, April 12, meeting.

“We thank the University community for its input, advice and counsel during this search process,” said Margo Cook, chair of the Board of Trustees. “The selection of a new president is the most important decision we have made as a new board. Ultimately, we sought and found what we enthusiastically believe is the right fit for URI -- a president prepared for these challenging times, with an unwavering commitment to diversity and inclusion and, importantly, someone who shares the University’s global vision.”

“I am honored and delighted for this opportunity to lead the University of Rhode Island,” Parlange said. “My life and career have taken me around the world, and to be coming full circle here, back to Rhode Island where I was born, is especially meaningful for me.  I have great appreciation for the transformational work President David Dooley has achieved, and a real sense of excitement and ambition for the future.

“The University can seize the opportunity to step up and provide leadership in these challenging times. We can stand out as an inclusive institution that creates new ways of learning and teaching, that pioneers innovative interdisciplinary research, and that, through its industry and public partnerships, is a major driver of the Rhode Island economy.

“I am glad to welcome Dr. Parlange back to the Ocean State to serve as the next University of Rhode Island President,” said Governor Dan McKee. “Throughout his years of service in higher education around the globe, Dr. Parlange has gained invaluable experience in innovative research, international relations, and inclusive leadership that will serve our state university well. As a new Governor, I look forward to working with Dr. Parlange as the university’s new president during this critical time for Rhode Island and our higher education community – together, there is so much we can accomplish for the next generation of University of Rhode Island students.”

“I’m looking forward to joining the community — cheering for the Rams, attending musical and theater performances, seeing what you create in the maker space, and learning about your life and experiences today at URI and in Rhode Island.”

More about Professor Marc B. Parlange:

He has received prestigious awards for his academic achievements, including an early career Macelwane Medal from the American Geophysical Union, the Dalton Medal of the European Geosciences Union and university teaching awards at EPFL and UBC. Parlange was awarded the 2020 American Meteorological Society’s Hydrologic Sciences Medal.

Parlange and his wife, Mary, have two children, Brendan and Luc.