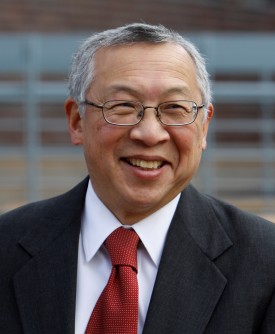 Newswise — COLLEGEVILLE, Pa. -- What happens at Commencement when the President that the Class has known best as President has died earlier in the year? At Ursinus College, where President Bobby Fong died unexpectedly Sept. 8, 2014, the late President Fong and his wife Suzanne, who was a source of strength for the campus after her husband’s death, will “graduate” with the class, receiving honorary baccalaureate degrees (President Fong’s posthumously).

Mrs. Fong will deliver the commencement address at the ceremony, May 15 at 10 a.m. on the campus front lawn. Their son will accept his father's degree.

Bobby Fong became President July 1, 2011. In his welcome message to the Class of 2015, which matriculated that August, he noted that he too, was starting his first year at Ursinus.

When he died Executive Vice President of Academic Affairs Dean Lucien Terry Winegar became Interim President. “These seniors started as students at Ursinus College the same year Bobby started as President. He was the only president they knew, they all had personal stories about him and they assumed he would hand them their diplomas,” Winegar said. “We are all pleased that we have found an appropriate way to include Bobby and Suzanne in their graduation ceremony.” Graduating seniors plan to wear a pin evoking Bobby Fong’s love of baseball. Mrs. Fong, who is an accomplished attorney in her own right, considers it “an honor,” the student newspaper reported. “I think what really touches me is the idea that we kind of get to graduate with our class," she told the newspaper.

Mrs. Fong is a graduate of Wellesley College and earned a master’s degree in English and a certificate in teaching English as a Second Language from UCLA, the first UCLA graduate to earn these degrees simultaneously. She earned her Juris Doctorate with high honors from the University of Kentucky College of Law and was elected a member of the Order of the Coif. She served for two years as a law clerk with the Kentucky Court of Appeals and became a research associate for the University of Kentucky College of Law, taught legal research and writing at the law school and served as an adjunct professor of economics at Berea College. She has served as a civic volunteer in a number of capacities, including serving on the Clinton N.Y. Central School Board.