Phoenixville Area High School will be the first U.S. team represented since 2007 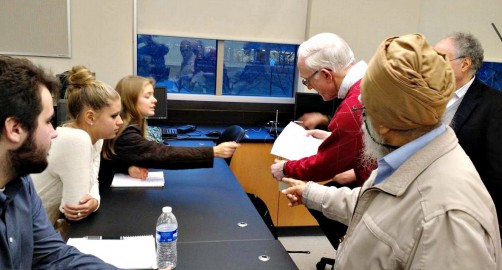 Physics faculty from the Department of Mathematics, Physics and Statistics at USciences have worked closely with the students to help them identify ways to improve their experiments, clarify their conclusions, and reach their fullest potential.

Newswise — As Phoenixville Area High School students prepare to end the United States’ eight-year absence from the International Young Physicists’ Tournament (IYPT), faculty from University of the Sciences have spent the past few months helping them polish their science and research skills before the week-long competition in Thailand this summer.

The IYPT, commonly referred to as “Physics World Cup,” is one of the largest annual team-based physics competitions. The competition is made up of 17 non-examination research problems and discussion-based sessions called “Physics Fights.” More than 30 international teams of high school students will be judged by expert physicists.

“The task of exploring the scientific problems designed by the IYPT is extraordinarily daunting,” said Jay Jennings, coach and science teacher at Phoenixville Area High School. “The students are expected to conduct their research at the highest level and contribute to the understanding of the scientific community.”

To do this effectively, physics faculty from the Department of Mathematics, Physics and Statistics at USciences have worked closely with the students to help them identify ways to improve their experiments, clarify their conclusions, and reach their fullest potential.

The IYPT problems are not tasks which can be solved within a short time with known methods, like in an exam. Instead, they are more complex, open-ended questions that can be solved from different angles. These problems were published several months ago to give all participants enough time to work with physicists and mathematicians to conduct experiments and hone their scientific thinking skills.

“These technical science problems engage high school students in a level of research and experimentation that could someday lead to authentic scientific discoveries,” said Elia V. Eschenazi, PhD, chair of the Department of Mathematics, Physics and Statistics at USciences. “They’re showing themselves and the world that they are committed to being leaders in science and technology, both now and in the future.”

Because only five students can represent the United States in Thailand, a U.S. IYPT National Selection Tournament will be held at Phoenixville Area Middle School on March 14, to determine the team roster. Like the international competition, students will present their research into one of the IYPT problems. A panel of judges will then grade them based on the originality of their research, quality of the experiment, clarity of their presentation, and their ability to answer the panel’s questions. The U.S. team will consist only of Phoenixville students this year, but Jennings said he plans to open this competition to students across the Delaware Valley next year.

At University of the Sciences, students embark on a challenging learning experience in a proving ground for successful professionals in the science and healthcare-related fields. A private institution dedicated to education, research, and service, and distinguished as the North America’s first college of pharmacy, the University has produced leaders in the science and healthcare marketplaces since its founding in 1821. Students in USciences’ four colleges learn to excel in scientific analysis and to apply their skills to improving healthcare in the lives of people worldwide through such disciplines as pharmacy, biology, chemistry, psychology, physics, physical therapy, healthcare business, and health policy. For more information, visit usciences.edu or follow @USciences on Twitter.