Newswise — "Lord of the Rings" star Viggo Mortensen told the graduates of St. Lawrence University in Canton, New York, that "activism is not a dirty word" and urged them to be active citizens, particularly to make changes in the country's health-care system.

Mortensen, star of "A History of Violence," graduated from St. Lawrence in 1980 and spoke to the University's 567 graduates at Commencement on Sunday, May 21, in Appleton Arena on campus. He also received an honorary doctor of arts degree at the ceremony, held indoors for the first time in 21 years.

"Much has changed in this country and the world since 1980," he said, "but the value of active citizenship is greater than ever. Making an earnest attempt to connect with people and issues outside of one's own limited personal circle will always be worthwhile. My liberal arts education at St. Lawrence taught me as much, and for that I am grateful."

He added, "Plato once said that 'One of the penalties of refusing to participate in politics is that you end up being governed by your inferiors.' Recent election results and subsequent political appointments in this country seem to bear that admonishment out."

Specifically, Mortensen urged those gathered to become active in changing what he sees as an inadequate and inequitable health-care system. He stated, "Among the most revered of teachings in any religion or spiritual code of ethics, including those attributed to Jesus Christ, is the admonition to care for the least fortunate among us. This lesson seems to have gone unheeded by many in the health care and insurance business, and, most tellingly, by the politicians who do their often uncharitable and obstructionist bidding. This is especially galling in light of how many of these same politicians regularly trumpet their avowed Christian values as badges of honor and electibility."

Continuing, Mortensen said, "People cannot be mentally focused, positive and actively engaged citizens if they are constantly worried that the only thing keeping them from financial ruin is to dangerously delay seeking or altogether deny themselves and their dependents necessary medical attention. You can, if you will, as informed individuals, do something " however little " to call attention to this most important problem in your own communities."

Also receiving honorary degrees and speaking at the ceremony were alumni Rev. Richard Gilbert, Class of 1958, and Barbara Tewksbury, Class of 1973, the William R. Kenan Professor of Geology at Hamilton College. 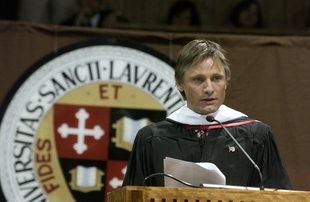 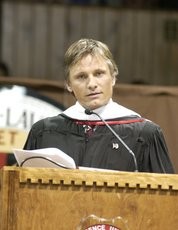 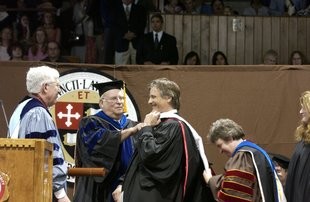 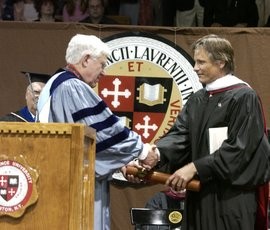 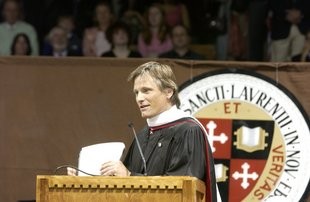 Caption: Actor Viggo Mortensen, star of "A History of Violence" and "The Lord of the Rings," speaking at St. Lawrence University's Commencement May 21.