Want a ‘Younger’ Brain? Add Beets to Your Menu 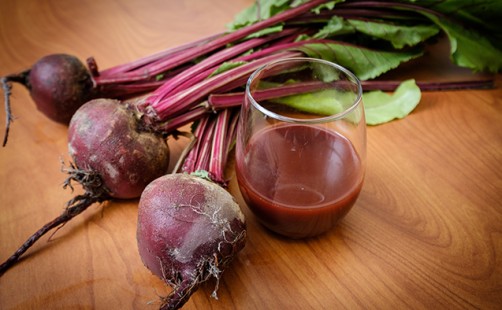 Newswise — It might be as simple as this: Eat beets, exercise and watch the health of your brain improve!

New research by scientists at Wake Forest University found that, as compared to exercise alone, adding a beet root juice supplement to exercise resulted in brain connectivity that closely resembles what you see in younger adults. The study was published in the Journals of Gerontology: Medical Sciences.

Beets are high in dietary nitrate, which the body converts to nitrite and then nitric oxide. Nitric oxide increases blood flow and targets areas that are especially in need.

Just plain exercise increases blood flow to the brain, so the shot of nitric oxide from the beet juice amplifies the effect.

Numerous studies have linked the nitrate in beets to better exercise performance across age groups, greater blood flow to the brain, and improvement in conditions ranging from chronic obstructive pulmonary disease (COPD) to diabetes to hypertension.

But this is the first to suggest that beet juice might actually enhance the effect that exercise training has on the aging brain.

And it’s just one more reason to add beets to your diet, and more evidence that a diet consisting of a lot of fruits and vegetables can contribute to overall good health.

“No one loves beet juice,” said Daniel Kim-Shapiro, physics professor, director of the Translational Science Center at Wake Forest and co-author of the study. “Well, I do. I down the stuff.”

But we’ve found some recipes that just might pass muster: