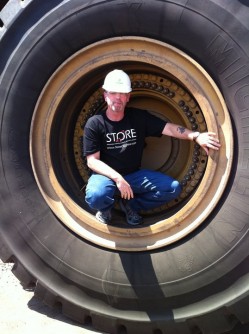 Newswise — MACOMB, IL – Michael Brunt is comfortable being one of the teachers who inspire the next generation of explorers in the STEM fields. Through his cultivated relationships at the University of Texas at Austin (UT Austin), the 1998 graduate of Western Illinois University's Bachelor of Arts in General Studies (formerly known as the Board of Trustees Bachelor of Arts) degree program, who is the environmental science teacher at Eagle Pass (TX) High School, has been able to equip his classroom with a working seismograph. He's also represented the American Geophysical Union at the European Geosciences Union Assembly (in 2009), and he has co-authored articles in peer-reviewed journals. All this "extra" work he embraces, he brings back to his students at Eagle Pass.

"Since about 2008, I've been working in collaboration with some of the professors at UT Austin. I originally started working with them to create an earth and space science curriculum for the state of Texas," Brunt noted. "Through my relationships there, I got involved in seismology and started collaborating with some faculty on earthquake research. The working seismograph in my classroom is from the Incorporated Research Institutions for Seismology [IRIS], which the UT Austin is a member of, as part of its Seismographs in Schools program."

This summer, Brunt will once again broaden his own experiential learning horizons—to the ultimate benefit of his students—and participate, as of one 24 selected individuals from around the world, in the Ocean Exploration Trust's (OET) Nautilus Exploration Program. According to the OET, the educators and students were selected from schools, universities, science centers, aquaria and non-profit organizations in 23 states and from six countries. The selectees will join the E/V Nautilus' expedition, which is led by Robert Ballard (the oceanographer who discovered the wreck of the Titanic), off the coasts of the United States, Belize, Honduras, Jamaica and Grenada. As members of the Corps of Exploration, the selected individuals will work alongside scientists and engineers and participate in live interactions with shore-based audiences via Nautilus Live, a 24-hour web portal at www.nautiluslive.org, according to the OET.

Brunt, who learned of the OET's program through his UT Austin colleagues, will serve as a 2014 Science Communication Fellow and will sail with the Nautilus Exploration Program July 16-26 to explore the Gulf of Mexico.

"One of the major goals of [this program] is to inspire the next generation of explorers in STEM [science, technology, engineering, math] fields," said Expedition Leader and OET Executive Vice President Katherine Croff Bell in an OET press release. "So we're very excited to provide educators and students with the direct experience of pure exploration, while allowing them the opportunity to share their experiences far and wide with their peers."

Brunt said the live website, through which people everywhere can watch the exploration, is one of most unique aspects of this program. Via the web, interested individuals can ask questions of the Science Communication Fellows or pose questions to the scientists, as well as to the pilots of the remotely operated vehicles (ROVs), who steer the machines that navigate the ocean depths.

"Primarily, my job is to answer and filter those questions. I'll be working four-hour shifts, with eight hours off. In the control room, there will be about eight of us, all seated in front of large screens so we will be able to see what the pilots of the ROVs are seeing. The website will show the exploration in real time, and individuals watching can also hear the conversation taking place in the control room. So if we discover something, those watching via the Internet are going to be able to see it at the exact same time," he explained.

Brunt noted that during his eight hours of "off" time, he will also be broadcasting daily updates to the Texas State Aquarium, as well as to other locations.

For Veronica Soto-Gonzalez, the former dean of instruction at Eagle Pass High School (and soon-to-be elementary principal of Benavides Elementary in Eagle Pass), it is no surprise Brunt applied, and was selected, for the OET's Nautilus Exploration Program.

"Through this kind of program, as well as through other activities and programs he has pursued, he brings a lot of things to our students that we wouldn't have otherwise here. Our high school is located on the U.S. and Mexico border, so things are not always accessible," Soto-Gonzalez said. "He consistently engages in activities—such as the seismograph program and his effort to offer the advance placement environmental science course here—that help our student population. At the campus level, he regularly takes on different challenges and always goes above and beyond what is required in his job."

A Second Science CareerAlthough he's had a relatively short career in teaching earth science at the high school level—he started in 2000—Brunt's curriculum vita demonstrates a dedication to engaging in various research and scholarly activities. In addition to his research publishing pursuits, last year, he was awarded funds, through a Google program, to start up the advanced placement environmental science course at Eagle Pass High School that Soto-Gonzalez mentioned. In 2011, he was honored with the Outstanding Earth Science Teacher Award by the National Association of Geoscience Teachers (NAGT) and Geological Society of America (GSA).

But teaching science to high school students was not Brunt's first career. He began his professional life as a firefighter while serving in the Air Force. The Illinois native (he graduated from Carl Sandburg High School in the Chicago suburb of Orland Park) moved to Texas via his military service. He eventually served as a firefighter professionally until an on-the-job injury cut his firefighting career short.

"Being from Illinois, I knew about Western. While I was a firefighter in the military, that's when I first learned about Western's program in fire science. That's what I was interested in, and I enrolled in the program in 1994 to study fire science. When I graduated in 1998, I drove all the way up from Texas to attend the graduation ceremony, too," he explained.

Brunt said it was through an employment-retraining program that he came to his teaching career.

"Fortunately, the state of Texas really takes care of their firefighters. Anyone who gets injured in the line of duty, such as a firefighter or police officer, and it causes he or she the loss of his/her career (and the person has been in the career 10 years or more), Texas will pay to retrain you," he explained. "Because I already had my bachelor's degree from Western, the state was willing to pay my tuition for me to go back and get my teaching certification. With the fire science courses I took, I had a strong background in science. I also had a strong desire to learn about science before then, so I inevitably ended up in the earth sciences and environmental sciences."

Brunt completed his education certification in 2000, as well as a master's of education degree in 2011 (both from Sul Ross State University-Rio Grande College).

"I find myself very fortunate. In my life, I have had two careers that I have a great passion for: fire fighting and teaching science. I think that's a rarity for someone to find that, and I look forward to more adventures in my teaching career." Brunt noted. "I am thrilled and honored to be given the opportunity to be part of the team aboard the Nautilus. It will enable me to learn about ocean research and exploration and give me the chance to share the experiences I have, and what I learn from them, with my students."