From the Land of Bernie Sanders: Vermont’s Newest Medical Students Weigh in on Single-Payer 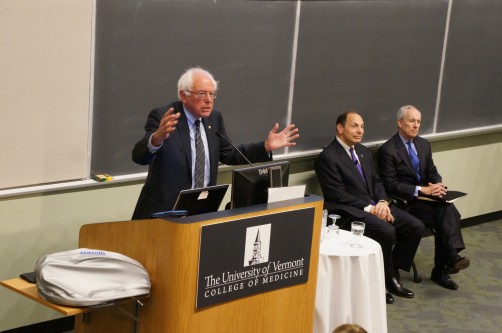 Newswise — In Bernie Sanders’ home state of Vermont, the newest class of medical students will be participating in a major career milestone – the White Coat Ceremony – on Friday, October 23, 2015. As future physicians, they see a strong need to change the system, but recognize the challenges to actualizing that goal. “Single payer would be a better system and there are similar systems succeeding in other countries, but it requires everyone’s buy-in for it to work, which clearly isn’t the case right now in America,” says Williston, Vt., native F. Gregory Gause of the University of Vermont College of Medicine’s Class of 2019. “When Vermont tried to unilaterally go to a single-payer system, we were not able to create a more efficient system.”

“As a future physician, I would value practicing in an environment where equal and uninhibited access to care is of paramount importance and doctors are reimbursed in a logical manner,” says Allison Greene, a native of Essex Junction, Vt. “The Patient Protection and Affordable Care Act was a step in the right direction in terms of expanding health insurance coverage and reducing costs, but it seems to have done little to alleviate the administrative burden of signing up for coverage or streamline reimbursement rates for hospitals and clinics. A single-payer system is far simpler, more equitable, and, as has been demonstrated in other countries, produces better health outcomes.”

A native of Sander’s hometown – Burlington, Vt. – Callie Krumholz Linehan says “I support single-payer healthcare, and believe that all people deserve equal access to care. I will advocate for my patients and my community during all of the many changes to the healthcare landscape over the course of my career.”

Prior to medical school, Gause played basketball for Montreal’s McGill University, where he majored in anatomy and cell biology before returning to Vermont and working as a medical assistant in dermatology at the UVM Medical Center. Greene worked as a medical assistant and rescue squad member, and volunteered at a rural health clinic in California before medical school. Linehan majored in biology at Utica, N.Y.-based Hamilton College and worked briefly with children with Asperger’s syndrome, then moved to Seattle and conducted ovarian cancer research at the Fred Hutchinson Cancer Research Center before returning home.

There are 116 students in the UVM College of Medicine’s Class of 2019. Roughly 30 percent of each class of UVM’s medical students hail from the Green Mountain State.