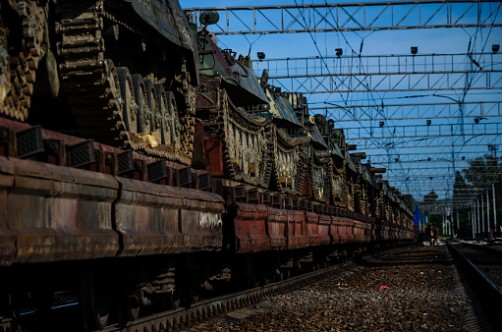 Georgia Tech experts available to speak about the escalating crisis between Ukraine and Russia and the global impacts.

With the situation on the border of Russia and Ukraine escalating, the potential for conflict is looming. Russian forces have amassed along the boundary and NATO has sent ships and fighter jets to the area. Now, the U.S. is considering sending troops to the region as well.

The Georgia Institute of Technology in Atlanta has several experts able to speak about the rising tensions from a variety of angles ranging from diplomacy and military intervention to the role of cyber warfare in this conflict. Tech's experts include a former Supreme Allied Commander of NATO in Europe and a former U.S. Defense Advisor at NATO with 45 years of experience in defense policy and international conflict.  These experts are available for interviews and live shots providing their insight and analysis on the current situation.

Gen. Philip Breedlove
Distinguished Professor of the Practice
International Affairs, Georgia Institute of Technology
Gen. Breedlove is the former NATO Supreme Allied Commander Europe. Breedlove can speak to military aspects and NATO related-infrastructure, as well as America's potential military response to the rising conflict.  Breedlove, a retired four-star general previously led all U.S. and Allied troops in Afghanistan and Kosovo. As Supreme Allied Commander he led NATO operations across Europe and the Mediterranean.

"Washington and its allies should be looking for ways to help Ukraine defend its own airspace and territorial waters, where it faces overwhelming Russian superiority," says Gen. Breedlove.

Dr. Robert Bell
Distinguished Professor of the Practice
International Affairs, Georgia Institute of Technology
Dr. Bell has 45 years of service to the U.S. government and was appointed a top U.S. Defense Advisor at NATO. Prior to that Bell served on the National Security Council as the Senior Director for Defense Policy and Arms Control and worked for 18 years on the Senate Foreign Relations and Armed Services Committee. Bell is well-versed in the diplomatic issues related to the conflict between the U.S., NATO, Ukraine, and Russia.

"In light of Ukraine's sustained effort to move towards becoming a genuine, pro-Western democracy over these three decades, it is imperative that the West offer it its full support in this crisis by providing additional lethal defensive weaponry, enumerating clearly the scale and the scope of the draconian economic sanctions that would be imposed on Russia should it commit further aggression against Ukraine, and impressing on Russia the extent to which any such aggression would result in Russia's complete isolation as a diplomatic pariah throughout the world," says Bell.

Nikolay Koposov
Distinguished Professor of the Practice
School of History and Sociology, Georgia Institute of Technology

Koposov is the author of several books and other publications on Russia and other pertinent topics, including the “memory wars” over Ukraine’s Soviet past. He is writing a book on Putin’s Russia. He can speak about the reasons for the Russia-Ukraine conflict and Putin’s likely goals and actions.

“The current crisis is an outcome of the Kremlin's long-term and carefully calculated strategy and is not about Ukraine but about America, which is Putin's main target,” says Koposov.

Dr. Adam Stulberg
Chair and Professor
Sam Nunn School of International Affairs, Georgia Institute of Technology
Stulberg is a broad expert in Russian-U.S. relations and can speak to broad contours of the conflict.

“The problem is that the United States and Russia don't understand each other's playbooks. We risk escalating conflict because we can't recognize signs of restraint with each other. The danger in this is that it could bring us both into a conflict that we don't want,” Stulberg explains.