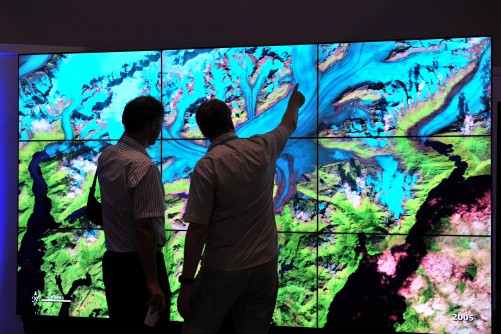 European space scientists view the NASA data visualizations at the U.S. Center at the 18th Session of the Conference of the Parties to the UN Framework Convention on Climate Change in this 2012 State Department photo. The Trump administration has moved in its early days to limit public information from federal employees who work on certain issues, such as at the Environmental Protection Agency and climate scientists.

LAWRENCE — In the early days of the Trump administration, federal agencies began stemming the flow of public information and social media coming from public employees who work on issues such as climate change, health care and food safety.

A University of Kansas researcher, who has extensively studied how public organizations manage dissent, predicts this environment will likely lead to more instances of "guerilla government," in which public servants work against the wishes of their superiors, through leaks and other means.

"He's caging a professional class of people who have expertise he doesn't have," said Rosemary O'Leary, the Edwin O. Stene Distinguished Professor of Public Administration at KU. "The more you suppress professionals and say 'you can't do that,' the more likely people are to say 'watch me.'"

The American Political Science Association recently published O'Leary's study "The New Guerrilla Government: Are Big Data, Hyper Social Media and Contracting Out Changing the Ethics of Dissent?" as part of her receiving the 2016 John Gaus Lifetime Achievement Award for her work in the field. O'Leary has authored two editions of the book "The Ethics of Dissent: Managing Guerrilla Government," based on her research and interviews with managers at public organizations.

O'Leary said the lens of bureaucratic politics raises important questions about who controls government organizations; the accountability of public servants; the roles, responsibility and responsiveness of bureaucrats in a democratic society; and the tension between public servants and political appointments.

"It's a paradox. Their orders are to serve the will of the people, and elected officials in theory represent the people," O'Leary said. "On the other the hand we also want bureaucrats who are acting ethically, being true to the data and trying to make the right decisions. Both of those ideas coexist and are both important. That's what makes it so hard for people contemplating guerilla government activities."

History and more recent examples produce names of people who circumvented traditional channels to expose certain actions, O'Leary said. Mark Felt, the FBI agent and eventual deputy director, who as "Deep Throat" leaked documents to reporters to expose the Watergate scandal that led to Richard Nixon eventually resigning as president. In the 1980s, scientists at the Seattle Regional office of the Environmental Protection Agency during the Reagan administration plotted a unified staff strategy behind the backs of political appointees and failed to implement orders with which they disagreed.

More recently, U.S. Army Pvt. Chelsea Manning leaked hundreds of thousands of classified government documents to WikiLeaks that depicted events of the Iraq War, including a 2007 video of a Baghdad airstrike that depicted a U.S. military helicopter firing on a group of men that included a journalist and two Reuters employees carrying cameras. President Barack Obama in his final days in office commuted Manning's 35-year federal prison sentence.

O'Leary said her research has revealed that the use of big data to operate government departments as well as the advent of hyper-social media and even the use of contractors to handle government work all have contributed to an environment that makes "guerilla government" actions similar to Manning and Snowden difficult to avoid.

"Contractors often have less of an allegiance to their organizations, and if they see something that they think needs to be aired, they might be more willing to do it," O'Leary said. "And people would be more willing to have them do it because their federally protected jobs are not on the line."

Most public organizations are inadequately equipped to deal effectively with guerilla government actions, she said, primarily because of an environment that limits internal opportunities for voicing dissent or when the issues involved are the subject of deeply held values.

To help organizations manage guerilla government scenarios, O'Leary has compiled six suggestions from managers she surveyed:- Create an organizational culture that accepts, welcomes and encourages candid dialogue and debate.- Listen to employees and contractors.- Understand both the formal and informal organization.- Separate the individuals from the problem itself.- Create multiple channels for people to voice dissent.- Create dissent boundaries and know when to stop.

O'Leary said it's sometimes more ethical for individuals to pursue avenues such as working with journalists or contacting elected officials than to take action that would fall under the purview of guerilla government. But she said the Trump administration, if it follows the same path of restricting actions of federal workers and bureaucrats, could find itself dealing with several instances of "guerilla government" if it does not seek to utilize their institutional knowledge to accomplish policy goals.

"The only way he can win with career public servants is to work hand in hand with them," O'Leary said. "The more he clamps down on them, the worse it's going to get."