Loughner More Than a Deranged Individual – He Is One of Millions 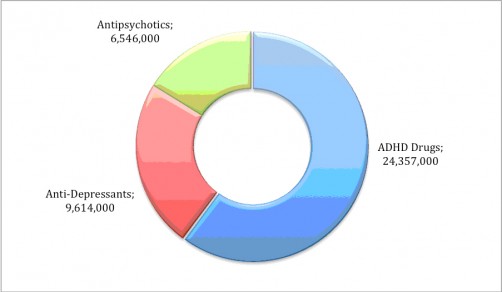 Number of America's youth, out of 75 million, using psychotropic medications

Newswise — The phone rang Saturday morning in Tucson. My coworker Sarah was gasping: “Gabrielle Giffords has been shot.” I couldn’t breathe, and started to sob. ‘”Oh, God no.” Sarah and I both know Gabby and many people in her office.

As a prevention scientist and psychologist involved in violence issues as well as mental illness prevention for more than 20 years, I was suddenly certain of the profile of the shooter. He will be a young man. He will have a history of behavior problems that go back in time. He will have markers of instability, impulsiveness and ruminating or obsessive thoughts. More than likely, the young man will have had problems with drugs or alcohol, too. His school experiences will show run-ins with staff and students. And, the young man will likely have some political obsessions.

Twelve hours later, all that I suspected appears true. The news is bad. Six people are dead, including a young man I know who worked in Gabby’s office. Several elderly people are dead. So is a 3rd-grade girl and a federal judge. Gabby is alive but could have lifetime impairments or die yet from complications. America is stunned and riveted by this event.

The news is made more shocking because most Americans don’t know that the prevalence rates of mental, emotional and behavioral disorders has been increasing among American youth for more than 20 years. Today that rate is significantly higher than in 22 other rich democracies.1-3 Most Americans don’t know that more and more young people are being rejected for military service because of such mental, emotional and behavioral disorders—just like the presumed shooter was rejected.4

"… [T]his was just a deranged individual," opined a spokesperson for Gabby Giffords’ political opponent in the 2010 election on one of the blogs.

On ABC, George Will said to Christiane Amanpour, “…we have 308 million people in America, a few of them are unhinged.”

He was implying that tragedies like Tucson are inevitable.

No, Mr. Will, it is not inevitable, and it is not a few. We have tens of millions of young people on psychotropic medications in America. And the rates or percentages of these mental, emotional and behavior disorders you call “unhinged” have been increasing in America, according to peer-reviewed science.

Mr. Will argues that this small percentage of unhinged people is the final explanation for what happened at the Tucson Safeway store. But his glib sound bite does not explain what we might do to prevent other young people who might be tipped into similar tragedy.

Every day, presumed deranged individuals commit hundreds of isolated events. They just do not make national headlines like the shooting of a congresswoman, a federal judge, a 9-year-old girl, and 14 others at the same place at the same time.

Dick Armey, one of the leaders of the Tea Party, said on the ABC morning show that we don’t need pop sociology. Rather, Mr. Armey said, “if we really want to understand deviance and danger in this country, we should apply the correct field of study, the correct tools of understanding and discipline with rigor and responsibility [of psychology].”

I agree with Armey. He describes what my colleagues and I do as prevention scientists.

According to the Wall Street Journal (Dec 28, 2010), there are nearly 25 million children on ADHD medications, almost 10 million on anti-depressants and about six million on psychotropic meds. These rates are probably twice the percentage as most rich democracies, based on data I’ve seen across countries.

Looking just at our young people, if even 10 percent of 75 million are vulnerable to erratic outcomes like the shooter, that means 7.5 million children and youth with mental, emotional or behavioral disorders could metastasize to violence against others, suicide or both. The reality is that practically every adult in America knows somebody or has a friend who knows somebody struggling with mental health and/or addiction problems.

Is this a few? Is this inevitable? Is this simply the way human children, youth and adults are supposed to live?

My short answer is an emphatic NO!

The reason for my firm response is really quite simple: I have hundreds of world-class scientific studies in my computer that demonstrate we can prevent the bulk of these problems for about the price of several childhood vaccinations we typically already give our kids.

The Institute of Medicine reported in 2009 on the availability of “behavioral vaccines” against mental illness, addictions, violence, emotional problems, suicide and other behavioral ills. This is not voodoo science. These are the findings of our most respected medical and scientific researchers as published in peer-reviewed journals.

The financial and emotional savings to our country of implementing the Institute of Medicine Report recommendations in every American household would bailout most state and local governments in a few years.

So why don’t we give those behavioral vaccines to every American? There is not a single valid reason.

What are the behavioral vaccines for curbing the metastatic madness affecting millions of children, youth and young adults? Consider these examples from the Institute of Medicine report.5

o A behavioral vaccine, called the Good Behavior Game, enables first-grade teachers to help children learn to control their attention and resist negative peer attention.6 This dramatically increases time for teaching and learning immediately. Overtime the benefits grow to prevent ADHD and Oppositional Defiant disorder by 3rd grade.7 By the 6th grade, bullying has been reduced. As have conduct disorders—just from the first grade “inoculation.”8 The same behavioral vaccine increases high-school graduation and college entry.9 From the early twenties to age 30, the behavioral vaccine prevents involvement in violent crime,10 suicidal behaviors,11 adult addictions and psychiatric disorders.12 And the cost of this behavioral vaccine? About $50 dollars per child’s life. No single medical vaccine prevents this many costly diseases or disorders that touch every family in America.o A behavioral vaccine called Triple P (which stands for Positive Parenting Program) provides universal access to brief parenting supports to EVERY parent who wants them. These brief supports can be delivered on TV, in the newspaper, on tip sheets, in 90-minute seminars, on-line, at doctors’ offices, at clinics, at churches and many other settings. This system of parenting supports (rather than a single course or book) costs about $15 per child to deliver yet prevents ADHD and Conduct Disorders,13 prevents child maltreatment for whole counties or communities,14 and other maddening problems for families. These benefits happen quickly for families and communities.

There are other behavioral vaccines in the IOM report. They, too, are powerful and very cost effective. All of them together are scientifically proven to quickly inoculate against the metastatic madness affecting every social class of families in America.15

Our officials will almost certainly move to spend several billion dollars to increase security details, bomb barriers, and other systems for our federal officials. That, however, will not make the country—our workplaces, our schools, our malls, or our homes safe from the metastatic madness infecting our children, youth, and young adults. Those things will do nothing to make our children saner, smarter and less vulnerable to the metastatic madness. Doing the people’s business, however, will get much harder.

If we don’t act for true prevention, the “unhinged” shooting at the Tucson Safeway will not be the only one; if we don’t seek to prevent metastatic madness in America, it may just be the end for public safety, wellbeing and our democracy.

What must be done is not red or blue, conservative or liberal, right or left. What must be done comes from what Mr. Armey calls the correct understanding and discipline of rigorous science to prevent disturbance, deviance, and danger in this country.

About Dr. EmbryDr. Dennis D. Embry is senior scientist and president of PAXIS Institute, Tucson, AZ. He is a co-investigator at Johns Hopkins Center for Prevention and Early Intervention. He is an advisor to the US Substance Abuse and Mental Health Administration, a panelist for the CDC Best Practices Document on Violence Prevention, and former advisor on strategies for military dependent children to Secretary of Defense Cheney during the Gulf War. He is also senior scientific consultant to Healthy Child Manitoba, and the International Parenting Research Center in Australia. Recently he was nominated to be on the President’s Advisory Council on Prevention.