Podcast on Evidence Law and Proof Started by Vanderbilt Professor 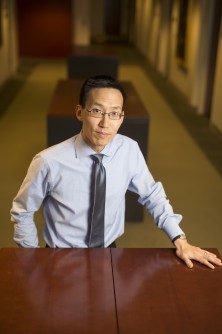 “The evidence world doesn’t have a regular conference,” said Cheng, professor of law at Vanderbilt. “Since we don’t regularly have a forum where all of us share our ideas, I wanted to create something like that, but I also didn’t want to run a full-scale conference every year.”

Among the already-posted interviews are:

On March 20, an episode on “Questioning Child Witnesses” featuring Thomas Lyon of the Gould School of Law at University of Southern California will be posted. To see the available and upcoming podcasts, go to the Excited Utterance website.

Cheng also likes to book scholars who research topics he doesn’t know much about, to help him keep up with the progress in his field along with his listeners. Most of the interviews are done by Skype, but some are done in person if circumstances make it possible.

A typical podcast draws about 500 listeners. It’s not verified, but Cheng has been told that some of his listeners don’t even work in evidence law and proof.

Excited Utterance is updated weekly during the academic year, which adds up to 28 episodes each year. Cheng, who was an engineer before going to law school, is able to manage the technical end of podcasting himself. Students and former students help with editing and selecting researchers to interview.

Excited Utterance is funded in part by the Branstetter Program in Litigation and Dispute Resolution at Vanderbilt Law School. Also, The Vanderbilt Institute for Digital Learning (VIDL) provided support through its microgrant program.

Media Inquiries:Jim Patterson, (615) 322-NEWS[email protected][Media Note: Vanderbilt has a 24/7 HD TV and radio studio. Use of the studio with Vanderbilt experts is free, other than reserving fiber time.]