Revocation of Obama-Era Guidelines on Transgender Bathrooms in Schools: Expert Available for Comment 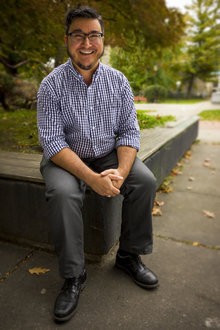 LGBT educator Luca Maurer is available to comment on the Donald J. Trump administration's decision to revoke Obama-era guidance to public schools letting transgender students use the bathrooms of their choice.

"This is not about bathrooms at all," said Maurer. "It is about whether transgender people will be fully recognized as human beings, or banished from the public sphere."

Next month, the Supreme Court will take up the issue in the case of G.G. versus Gloucester County School Board, which pits a transgender high school student against school officials he contends have violated his rights by not allowing him to use the restroom of his choice.

Maurer is the founding director of the Center for Lesbian, Gay, Bisexual & Transgender Education, Outreach, and Services at Ithaca College. He is the co-author of "The Teaching Transgender Toolkit: A Facilitator’s Guide to Increasing Knowledge, Decreasing Prejudice & Building Skills," a book which provides resources and best practices to those wishing to facilitate trainings about transgender people, identities and experiences. He recently served as a consultant on National Geographic's historic issue on gender.

Maurer has served as a consultant/trainer and given numerous presentations on such topics as sexual orientation, gender identity, disability issues and HIV/AIDS for a variety of publications. He has served on the editorial boards of the American Journal of Sexuality Education and of Prevention Researcher, a multidisciplinary journal focusing on successful adolescent development and at-risk youth.