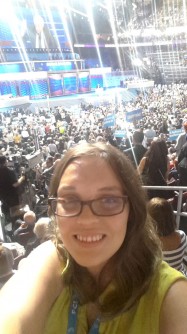 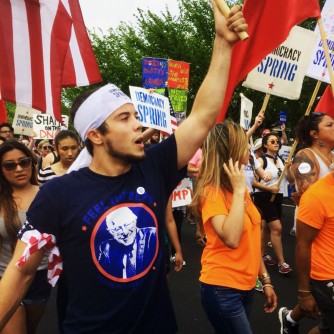 Newswise — SALISBURY, MD---Salisbury University students Amanda Jackson and Kobi Azoulay both campaigned for Bernie Sanders as the Democratic presidential nominee. When it became apparent that Hillary Clinton would win the honor instead, both traveled to Philadelphia this summer for the Democratic National Convention — and had vastly different experiences. Jackson, an M.S.W. student from Cambridge, MD, was approached by the Sanders campaign and encouraged to apply to become a delegate at the convention. Her name was placed on the ballot, and she won a spot on the floor inside the Wells Fargo Center. Azoulay, a junior political science and communication arts major from Germantown, MD, joined with Democracy Spring, a coalition calling for a reduction of the influence of money in politics and expansion of voting rights, to protest the convention outside the center. While Jackson was invited to receptions and after-parties, Azoulay was issued a citation, along with hundreds of other protesters, for disorderly conduct. Both had the same goal: Support democracy in the U.S. Jackson became involved in the Sanders campaign by hosting a “flyering” event at SU, posting flyers in support of the candidate. Her impetus to attend the convention was an email sent to local supporters, asking them to submit their names and information if they were interested. Azoulay worked directly with Sanders’ campaign office in Washington, D.C. His inspiration to protest at the convention came upon learning about a Democracy Spring event at the U.S. Capitol in April. The highly publicized demonstration resulted in the arrest of over 1,200 people, including several celebrities such as actors Rosario Dawson and Mark Ruffalo, and ice cream magnates Ben Cohen and Jerry Greenfield. Jackson’s first event at the convention was a welcome party at the Philadelphia Museum of Art. She also attended a speakers breakfast, a Maryland Day event and a “Day on the Water” cruise leaving from the Independence Seaport Museum. Azoulay’s first event in Philadelphia was an intensive civil disobedience training session. On the second day, he joined others in marching to the Wells Fargo Center and forming a sit-in when denied admission. Several protesters jumped the barricades. The next day, some took Uber rides past the security checkpoint and smuggled a Democracy Spring banner into the event. (Azoulay did not participate in this part of the protest because he “didn’t want to get arrested again,” but he did join in a second march to Franklin Delano Roosevelt Park, a public area across the street from the facility.) On the final day, several Democracy Spring members (again, not Azoulay — he said his attire did not meet the strict dress code) gained access into the convention to interrupt Clinton’s nomination acceptance speech. Jackson was in the audience, though she didn’t notice the disruption. “Her speech was very well done,” she said, “and her husband’s speech was funny and very moving. It was interesting to see [Bill Clinton] as ‘the husband’ instead of ‘the former president.’” She ranked those and the powerful speech by Khizr Khan, the father of a Muslim U.S. soldier killed in combat, who criticized Republican candidate Donald Trump’s stance against Muslims and immigrants, among her favorite moments at the convention. They were topped only by First Lady Michelle Obama’s emotional speech on the importance of African American and female role models in the White House, she said. Those moments received vast media coverage — attention Azoulay wished had been focused on the protests instead. The press painted Democracy Spring’s actions in a negative light, often lumping the non-partisan group in with protesters generally claiming the nomination process was rigged against Sanders — when reporters covered the protests at all, he said. He cited CNN and The New York Times as the most egregious offenders in his eyes. “I had never experienced that type of media bias before,” he said. “It was enlightening.” The convention also was transformative for Jackson. While Democracy Spring supporters worked to change the system, she listened to what party supporters had to say — and has since encouraged others to do the same. “Talk to people you might not agree with,” she advised other students who may find themselves in similar positions. “I had some of the best conversations and most fun with Hillary supporters even though I was a Bernie supporter, and now, partially because of what they had to say, I’m voting for Hillary.” “The experiences of Jackson and Azoulay illustrate the expansive forms of participation in today’s political sphere,” said Dr. Sarah Surak, co-director of SU’s Institute for Public Affairs and Civic Engagement. “We often have an unfortunately limited notion of political participation as occurring only through the individual, singular act of voting on Election Day. These SU students are displaying the varying methods historically used to encourage and enact the change they hope to see.” Though their ideals may differ, both students are returning to campus this fall with a similar message: Get involved in politics, whether it’s supporting an individual candidate or rallying others to speak out about a specific issue. “Presidential elections years are the easiest times to do that,” Jackson said. “Don’t be shy. I did some flyering events, and they picked me to go [to the convention].” “You really can make a difference,” said Kobi, “but you have to get together and do something to make it happen.” For more information call 410-543-6030 or visit the SU website at www.salisbury.edu. 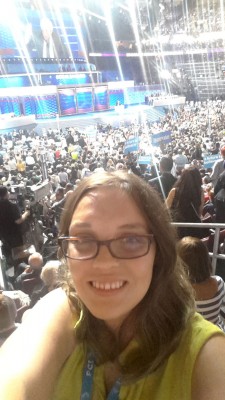 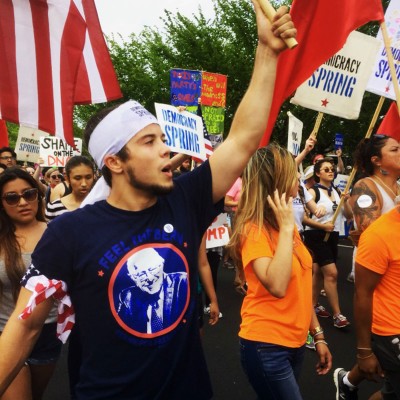