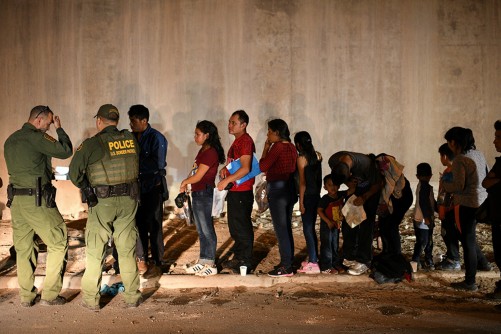 A U.S. border patrol agent patrols a trail along the Rio Grande river at the border between United States and Mexico, in Roma, Texas, May 11, 2017.

Immigration has been a touchstone of the U.S. political debate for decades, as policymakers must weigh competing economic, security, and humanitarian concerns. Congress has been unable to reach an agreement on comprehensive immigration reform for years, effectively moving some major policy decisions into the executive and judicial branches of government and fueling debate in the halls of state and municipal governments.

President Donald J. Trump was elected on pledges to take extraordinary actions to curb illegal immigration and prevent terrorism, including controversial plans to build out the border wall with Mexico, deport millions of undocumented immigrants, and temporarily ban Muslims. In office, he has scaled back his plans in some areas but pushed ahead with full force in others, often drawing legal challenges and public protest.

What is the immigrant population in the United States?

Immigrants comprise about 14 percent of the U.S. population: more than forty-three million out of a total of about 323 million people, according to Census Bureau data. Together, immigrants and their U.S.-born children make up about 27 percent of U.S. inhabitants. The figure represents a steady rise from 1970, when there were fewer than ten million immigrants in the United States. But there are proportionally fewer immigrants today than in 1890, when foreign-born residents comprised 15 percent of the population.

Illegal immigration. The undocumented population is about eleven million and has leveled off since the 2008 economic crisis, which led some to return to their home countries and discouraged others from coming to the United States. In 2017, Customs and Border Protection reported a 26 percent drop in the number of people apprehended or stopped at the southern border from the year before, which some attribute to the Trump administration’s policies. At the same time, arrests of suspected undocumented immigrants jumped by 40 percent.

More than half of the undocumented have lived in the country for more than a decade; nearly one-third are the parents of U.S.-born children, according to the Pew Research Center. Central American asylum seekers, many of whom are minors who have fled violence in their home countries, make up a growing share of those who cross the U.S.-Mexico border. These immigrants have different legal rights from Mexican nationals in the United States: Under a 2008 anti–human trafficking law, minors from noncontiguous countries have a right to a deportation hearing before being returned to their home countries.

Though many of the policies that aim to reduce unlawful immigration focus on enforced border security, individuals who arrive to the United States legally and overstay their visas comprise a significant portion of the undocumented population. According to a 2014 report by the Center for Migration Studies, individuals who overstayed their visas outnumbered those who arrived by crossing the border illegally by six hundred thousand since 2007.

Legal immigration. The United States granted nearly 1.2 million individuals[PDF] legal permanent residency in 2016, more than two-thirds of whom were admitted based on family reunification. Other categories included: employment-based preferences (12 percent), refugees (10 percent), diversity (4 percent), and asylees (3 percent). In late 2017, there were more than four million applicants on the State Department’s waiting list for immigrant visas[PDF].

Hundreds of thousands of individuals work legally in the United States under various types of nonimmigrant visas. In 2017, the United States granted close to 180,000 visas [PDF] for high-skilled workers, known as H1B visas, and nearly 250,000 visas for temporary workers in agriculture and other industries. H1B visas are capped at 85,000 per year, with exceptions for certain fields.

Immigrants made up roughly 17 percent of the U.S. workforce in 2014, according to the Pew Research Center; of those, around two-thirds were in the country legally. Collectively, immigrants made up 45 percent of domestic employees; they also comprised large portions of the workforce in U.S. manufacturing (36 percent), agriculture (33 percent), and accommodation (32 percent). Another Pew study found that without immigrants, the U.S. workforce is expected to decline from 173.2 million in 2015 to 165.6 million in 2035; the workforce is expected to grow to 183.2 million if immigration levels remain steady, according to the report.

How do Americans feel about immigration?

A 2017 Gallup poll found that 71 percent of Americans considered immigration a “good thing” for the United States. A year earlier, as many as 84 percent supported a path to citizenship for undocumented immigrants if they meet certain requirements. A separate Gallup poll found that among Republicans, support for a path to citizenship (76 percent) was higher than support for a proposed border wall (62 percent).

What legislation has Congress considered in recent years?

Congress has debated numerous pieces of immigration reform over the last two decades, some considered “comprehensive,” others piecemeal. Comprehensive immigration reform refers to omnibus legislation that attempts to address the following issues: demand for high-skilled and low-skilled labor, the legal status of the millions of undocumented immigrants living in the country, border security, and interior enforcement.

The last time legislators came close to significant immigration reform was in 2013, when the Democrat-led Senate passed a comprehensive reform bill that would have provided a path to citizenship for undocumented immigrants and tough border security provisions. The bill did not receive a vote in the Republican-controlled House of Representatives.

What actions have presidents taken in recent years?

Barack Obama. President Obama took several actions to provide temporary legal relief to many undocumented immigrants. In 2012, his administration began a program, known as Deferred Action for Childhood Arrivals (DACA), that offered renewable, two-year deportation deferrals and work permits to undocumented immigrants who had arrived to the United States as children and had no criminal records. Obama characterized the move as a “stopgap measure” and urged Congress to pass the Dream Act, legislation first introduced in 2001 that would have benefited many of the same people. As of March 2018, more than eight hundred thousand [PDF] had taken advantage of DACA.

In 2014, Obama attempted to extend similar benefits to as many as five million undocumented parents of U.S. citizens and permanent residents. However, more than two dozen U.S. states sued his administration, alleging that the program, known as Deferred Action for Parents of Americans (DAPA), violated federal immigration law and the U.S. Constitution. A Texas federal judge blocked the program in 2015, and the Supreme Court effectively killed it in 2016.

Donald J. Trump. Trump has signed several executive orders affecting immigration policy. The first, which focused on border security, instructed federal agencies to construct a physical wall “to obtain complete operational control” of the U.S. border with Mexico. Additionally, it called for an end to so-called catch and release practices, where certain unauthorized immigrants who were captured at the border would be released into the United States while they await court hearings. It also expanded the application of “expedited removal” to include any unauthorized immigrant who cannot prove they have been in the United States for two years, allowing them to be removed without a court hearing.

The second executive order, which focused on interior enforcement, expanded the categories of unauthorized immigrants prioritized for removal and ordered increases in enforcement personnel and removal facilities. It also moved to restrict federal funds from so-called sanctuary jurisdictions, which in some cases limit their cooperation with federal immigration officials.

The third order, which focused on terrorism prevention, banned nationals from Iran, Iraq, Libya, Somalia, Sudan, and Yemen from entering the United States for at least ninety days; blocked nationals from Syria indefinitely; and suspended the U.S. refugee program for 120 days.

These actions, particularly the ban on travelers from seven Muslim-majority countries, drew widespread protests and legal challenges from individuals, cities, and states. The so-called travel ban suffered several legal setbacks; the Trump administration revised it twice, and it eventually found its way to the Supreme Court, where justices allowed [PDF] a third iteration to stand.

Trump more than halved the annual cap of refugees admitted to the United States to fifty thousand, and his orders could make it more difficult for individuals to seek asylum; more than 180,000 applied for asylum in 2016[PDF]. In 2017, the Trump administration ended temporary protected status (TPS) for thousands of Haitians and Nicaraguans who were allowed into the United States after environmental disasters in their home countries. Beneficiaries of TPS are permitted to live and work in the United States for up to eighteen months, a period that can be extended at the president’s discretion. In 2018, Trump ended the same relief program for hundreds of thousands of Hondurans, Nepalis, and Salvadorans.

In September 2017, Trump announced plans to phase out DACA, which he called, along with DAPA, “illegal” actions by Obama, but challenges in the courts have prevented him from terminating the program thus far.

The Trump administration has also ratcheted up efforts to deter border crossings, including those seeking asylum. In early 2018, it implemented a so-called zero-tolerance policy at the southern border, in which authorities arrested and criminally prosecuted all unauthorized immigrants. As a result, more than two thousand child migrants were detained separately from their parents or guardians. President Trump ended the family separation policy in June following widespread protests. Presidents Bush and Obama employed similar deterrence measures but did not separate families.

How are state and local authorities handling these issues?

States vary widely in how they treat unauthorized immigrants—or anyone suspected of being unauthorized. Some states, such as California, allow undocumented immigrants to apply for drivers’ licenses, receive in-state tuition at universities, and obtain other benefits. At the other end of the spectrum, states such as Arizona have passed laws permitting police to question people about their immigration status.

The federal government is generally responsible for enforcing immigration laws, but it may delegate some immigration-control duties to state and local law enforcement. However, the degree to which local officials are obliged to cooperate with federal authorities is a subject of intense debate. Proponents of tougher immigration enforcement have labeled state and local jurisdictions that limit their cooperation with federal authorities as “sanctuary cities.” There is no official definition or count of sanctuary cities, but the Immigrant Legal Resource Center identifies more than six hundred counties with such policies.

President Trump decried sanctuary cities throughout his campaign and issued an executive order to block federal funding to such municipalities and to reinstate a controversial program, known as Secure Communities, in which state and local police provide fingerprints of suspects to federal immigration authorities and hand over individuals presumed to be in the country illegally. He also ordered the expansion of enforcement partnerships among federal, state, and local agencies. Several cities are challenging Trump’s order in court. In March 2018, the Justice Department filed a lawsuit against California, alleging that several of the state’s laws obstruct federal immigration enforcement.

Some state governors have also protested Trump’s border security policies: At least five said they would refuse to send National Guard troops to the southern border until the president ended family separations.