In Brief by Philip H. Gordon 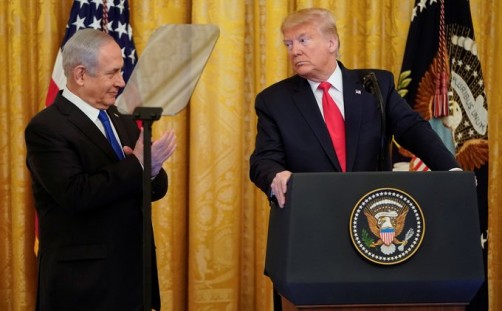 Newswise — What is your main takeaway from Trump’s Middle East peace plan? Does it provide a sound basis for a deal?

The plan seems to me more a codification of Israeli positions than a serious proposal for negotiated peace. On all the major issues, including security, territory, refugees, and Jerusalem, the administration is basically indicating that Palestinians should back away from all their long-standing demands, recognize that they have lost this conflict, and accept the realities that have been established on the ground.

According to the plan, this means: acquiescing to effective Israeli annexation of large parts of the West Bank and Jordan Valley, meaning Palestinian territory would be surrounded by Israel; forgoing even symbolic refugee returns to Israel; accepting an embassy only in the remote outskirts of Jerusalem, which Israel would control as an “undivided” city; giving Israel the sole right to determine when, if ever, Palestinians can take charge of their own security and the right to reoccupy Palestinian territory if its own security is threatened; and requiring the Palestinians to somehow take control of Gaza and disarm Hamas, the terrorist group that currently controls it. It’s hard to imagine the administration really believes any Palestinian leadership could accept such a plan.

Why would the administration put the plan out now if prospects for agreement are so low?

The timing of the plan’s release appears to have more to do with Israeli and U.S. domestic politics than with the administration’s belief that the moment is ripe to launch it. Senior administration officials have been saying for almost two years that the plan was essentially complete. It seems more than coincidental that it was released on the very day that Israeli Prime Minister Benjamin Netanyahu was indicted on fraud and corruption charges by Israel’s attorney general and while Trump is undergoing impeachment hearings in the U.S. Senate, while both Netanyahu and Trump are in the midst of heated electoral campaigns. The release of the plan now could help Netanyahu, by changing the subject in Israel from the corruption allegations he is facing to the issue of security, on which he is seen as strong, and by showing that he can deliver the support of the U.S. president. Trump might feel he can also derive electoral benefits by burnishing further his pro-Israel credentials.

The fact that the Israeli government has already decided to vote on annexation of large parts of the West Bank suggests that the plan is a green light to unilateral Israeli action, not a sincere proposal for negotiated peace.

How do you expect the Palestinians to respond?

It was not surprising that Palestinian leader Mahmoud Abbas immediately rejected the plan, saying “we will not kneel and we will not surrender.” The Palestinians have refused to engage with the Trump administration for more than two years, as a response to Trump’s decisions to recognize Jerusalem as Israel’s capital, recognize Israeli annexation of the Golan Heights, close the U.S. diplomatic mission to the Palestinians in Jerusalem, and make harsh cuts to U.S. humanitarian assistance for Palestinians. It’s hard to see Palestinians responding favorably to a plan that they had no input on, leans so heavily toward Israeli positions, and was presented in Washington by Trump alongside Netanyahu with no Palestinians in sight. The launch of this plan risks provoking anger and possibly even violence among Palestinians and in Jordan, but the real risk is that—by paving the way for further Israeli annexation—it further undermines Israel’s long-term prospects as a Jewish, democratic state.

Will the Arab states in the region view the plan more favorably?

The Trump administration seems to hope that Gulf Arab states such as Saudi Arabia and the United Arab Emirates will embrace the plan and help persuade the Palestinians to support it. I suspect the administration will be disappointed.

The Gulf strategic alignment with Israel is real—Israel and the Gulf states all now prioritize threats from Iran and Islamist extremists—but that will not necessarily translate into overt Arab support for such a pro-Israel plan. A public embrace by the Gulf Arabs of the plan, especially on the issue of Jerusalem, would be a political gift to their adversaries in countries such as Iran and Turkey, who would accuse them of selling out the Palestinians on an issue of importance to the entire Muslim world. The fact that the Saudi ambassador to the United States did not attend Trump’s rollout—nor the ambassadors of Egypt and Jordan, which have diplomatic relations with Israel—suggests that Arab support for the U.S. approach may be less enthusiastic than the administration might have hoped.