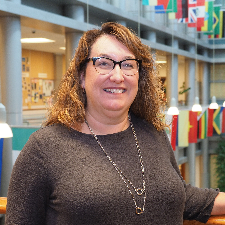 The U.S. Supreme Court will hear cases Oct. 8 on a critical question for the LGBTQ community: Does Title VII of the 1964 Civil Rights Act protect LGBTQ people from workplace discrimination?

Title VII of the Civil Rights Act of 1964 bars employers from discriminating against employees on the basis of sex as well as race, color, national origin and religion. At issue is whether the protections against sex discrimination include gender identity and/or sexual orientation.

The high court may indicate how it will answer that question by the questions the justices themselves ask during the hearing, says Heather Walter-McCabe, a LGBTQ legal expert. McCabe is an associate professor of Social Work at the IU School of Social Work and is also on the faculty of the IU Robert H. McKinney School of Law and the Richard M. Fairbanks School of Public Health at IUPUI.

Walter-McCabe says that the numerous amicus briefs submitted to the court make arguments from statutory construction/legislative intent to religious freedom in discussing their desired outcome for the case.  It remains to be seen what the Supreme Court will focus on as they make an ultimate decision.

While this case is particularly examining the scope of the definition of sex in Title VII workplace protections, the case has implications for health.  Section 1557 of the Patient Protection and Affordable Care Act outlines nondiscrimination protections for the program and relies on the definitions contained in other areas of law, with influence from the Title VII interpretation of discrimination on the basis of sex.   Walter-McCabe says an interpretation that sexual orientation or gender identity are not protected under the law can have far reaching consequences for health access.