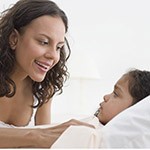 The president also asked Congress to pass the Healthy Families Act, which would grant Americans seven days a year of paid sick time.

Augmenting the Family and Medical Leave Act (FMLA) is one place Congress might start if it wants to combat sex-role stereotypes and advance women’s equal employment opportunity, as well as supporting families in times of illness, say experts at Washington University in St. Louis.

“First, the FMLA deepens the gender divide in caregiving patterns,” she said. “More women than men take leave under the FMLA. As a result, the FMLA has reinforced, rather than disrupted, traditional gender roles.”

“Second, low-income workers — the people who most need the protection of the FMLA — are disproportionately excluded from its protections,” she said.

“These workers cannot afford to take unpaid leave. They are also more likely to be contingent workers who do not meet the FMLA’s eligibility criteria for coverage,” Dinner said.

Congress and state governments could remedy these limitations by augmenting the federal FMLA or state equivalents, Dinner said.

“Specifically, they could establish incentives to encourage men to use FMLA leave,” she said. “They could also enact paid-leave mandates. Advocates’ success campaigning for paid family leave in California attests to the political feasibility of such a bill.”

More than 44 million American workers don’t have a single paid sick day for when they, or their children, are ill, said Elizabeth Sepper, JD, associate professor of law and expert on health law.

“The president’s proposal of paid sick leave would better support those families in times of illness,” she said.

“Paid sick leave is a significant public health measure. When their employers don’t give them paid sick leave, workers often go to work sick,” Sepper said. “They spread the flu and other viruses to their co-workers and customers.

“When they are sick, the vast majority of low-income workers — who prepare our food, watch our children and care for our elderly — must go to work to make ends meet. Paid sick days would allow them to stay home and keep all of us healthier.”