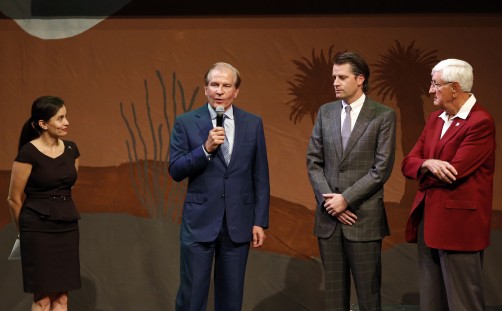 The El Paso-based Hunt Family Foundation has committed $2.5 million over six years to support Arrowhead Center’s work in commercializing discoveries and innovations, encouraging entrepreneurship, launching and developing new businesses, and creating lasting partnerships in the Borderplex region, which includes New Mexico, west Texas and Ciudad Juarez. With the funds, Arrowhead Center has created new programming through the Hunt Center for Entrepreneurship, with the purpose of promoting economic development in the region.

“We’re pleased to help get the Ignite Aggie Discovery campaign off to a strong start,” said Josh Hunt, president of the Hunt Family Foundation. “We believe Arrowhead Center has the potential to do great work and accomplish much in the areas of entrepreneurship and student startup innovation. The goal of the Hunt Family Foundation is to assist in initiatives that can help build a better quality of life for all residents of the Borderplex, and New Mexico State and Arrowhead Center can play a significant role in those efforts.”

The Hunt Family Foundation has long been committed to supporting sustainable programs that can make a widespread and prolonged impact in the Borderplex region. Started in 1987 by Woody and Gayle Hunt, the foundation focuses support for non-profit initiatives in six categories, including education and regional economic development.

The Hunt Student Startup Sponsorship program is one new initiative already underway with the funding through Arrowhead Center’s Studio G, the first student business incubator in New Mexico. Designed to accelerate student ventures, the semester-long sponsorships fund a portion of a student entrepreneur’s time to significantly advance their enterprise. In addition to being paid to focus part-time on their businesses, students receive training and mentorship through Studio G, as well as access to follow-on funding.

Kathy Hansen, CEO and director of Arrowhead Center, said the Hunt Family Foundation gift will allow Arrowhead to greatly expand its collaboration with like-purposed organizations in the region. She said the funds will be significant to future building plans as the need for collaborative space grows at Arrowhead Center.

“The impact of this funding will be felt throughout the Borderplex, as Arrowhead Center works to build long-term relationships in the region and beyond,” Hansen said. “We’ll be able to provide greater opportunities for partnerships to support our researchers as they explore ways to apply their work and make an impact in the marketplace. We’ll also help drive improvements in the regional economy by continuing to foster a culture of entrepreneurship that addresses the need for business and job creation in innovative ways.

“It’s an exciting time, and we’re poised for tremendous growth,” she continued. “We’re extremely grateful for the opportunity that the Hunt Family Foundation has provided to build on the work we’re doing.”

The announcement came during a special kickoff event for the Ignite Aggie Discovery comprehensive campaign at the Associated Students of NMSU Center for the Arts on Friday, April 28. During the campaign’s silent phase, which began in May 2013, the NMSU Foundation raised more than half the campaign’s goal – over $72.5 million. While NMSU is a public university system, funding from private donors, alumni, corporations, foundations and other sources supports vital community programs, research and student scholarship opportunities.

One of the most important goals of the campaign, which extends through 2019, is the creation of $50 million in new scholarship endowments. This would provide $2 million each year in perpetuity for new, game-changing scholarships.

“Our Ignite Aggie Discovery comprehensive campaign is about focusing our energy, our innovation and our momentum on making the NMSU system stronger and better for the future of our students and the future of New Mexico and the region,” said Andrea Tawney, president of the NMSU Foundation. “This gift from the Hunt Family Foundation gets the public phase of our campaign off to an explosive start, and truly demonstrates that we are a Borderplex community that can advance our region if we collaborate and maximize our resources.”

About the Woody and Gayle Hunt Family Foundation