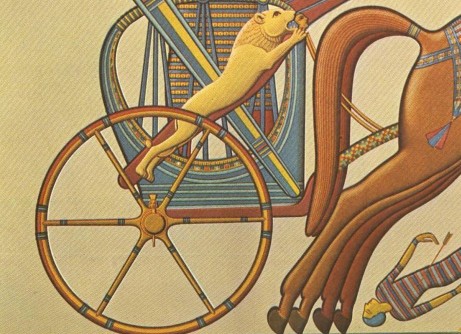 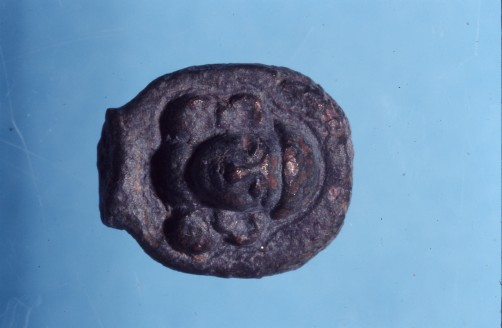 Scientists from the Zinman Institute of Archaeology at the University of Haifa have solved the riddle:

"The decorated bronze tablet from El-ahwat, near Katzir in central Israel, is part of a linchpin from a battle chariot wheel"

According to Prof. Adam Zertal, the identification made by Oren Cohen of the Zinman Institute is likely to support the opinion that the archaeological site is Harosheth Haggoyim - Sisera's home town, as mentioned in the book of Judges

Newswise — A 3,200-year-old round bronze tablet with a carved face of a woman, found at the El-ahwat excavation site near Katzir in central Israel, is part of a linchpin that held the wheel of a battle chariot in place. This was revealed by scientist Oren Cohen of the Zinman Institute of Archaeology at the University of Haifa. "Such an identification reinforces the claim that a high-ranking Egyptian or local ruler was based at this location, and is likely to support the theory that the site is Harosheth Haggoyim, the home town of Sisera, as mentioned in Judges 4-5," says Prof. Zertal.

The El-ahwat site, near Nahal ‘Iron, was exposed by a cooperative delegation excavating there during 1993-2000 from the Universities of Haifa and Cagliari (Sardinia), headed by Prof. Zertal. The excavated city has been dated back to the end of the Bronze Age and early Iron Age (13th-12th centuries B.C.E.). The city's uniqueness - its fortifications, passageways in the walls, and rounded huts - made it foreign amidst the Canaanite landscape. Prof. Zertal has proposed that based on these unusual features, the site may have been home to the Shardana tribe of the Sea-Peoples, who, according to some researchers, lived in Harosheth Haggoyim, Sisera's capital city. The city is mentioned in the Bible's narratives as Sisera’s capital, and it was from there that the army of chariots set out to fight the Israelites, who were being led by Deborah the prophetess and Barak, son of Avinoam. The full excavation and its conclusions have been summarized in Prof. Zertal's book “Sisera’s Secret, A Journey following the Sea-Peoples and the Song of Deborah” (Dvir, Tel Aviv, 2010 [Hebrew]).

One of the objects uncovered at the site remained masked in mystery. The round, bronze tablet, about 2 cm. in diameter and 5 mm. thick, was found in a structure identified as the "Governor's House". The object features a carved face of a woman wearing a cap and earrings shaped as chariot wheels. When uncovered in 1997, it was already clear that the tablet was the broken end of an elongated object, but Mr. Cohen, who included the tablet in the final report of the excavations, did not manage to find its parallel in any other archaeological discoveries.

Now, 13 years later, the mystery has been solved. When carrying out a scrutinizing study of ancient Egyptian reliefs depicting chariot battles, Mr. Cohen discerned a unique decoration: the bronze linchpins fastening the chariot wheels were decorated with people's faces - of captives, foreigners and enemies of Egypt. He also noticed that these decorations characterized those chariots that were used by royalty and distinguished people.

"This identification enhances the historical and archaeological value of the site and proves that chariots belonging to high-ranking individuals were found there. It provides support for the possibility, which has not yet been definitively established, that this was Sisera's city of residence and that it was from there that the chariots set out on their way to the battle against the Israelite tribes, located between the ancient sites of Taanach and Megiddo," Prof. Zertal concludes.