$8.5 Million Contract Will Foster Development of Agriculture and Nutrition Policy and Programming in Ethiopia 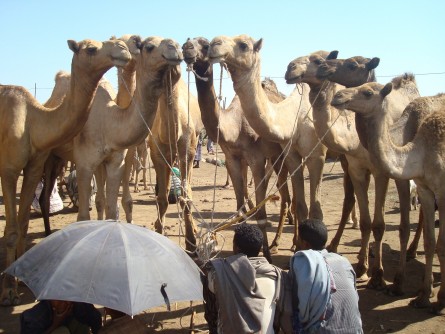 Newswise — BOSTON (April, 9 2014) ─ The Feinstein International Center at Tufts University is the recipient of an $8.5 million USAID contract to help advance rural development in Ethiopia. The Agricultural Knowledge, Learning, Documentation and Policy Project (AKLDP) will support evidence-gathering from a wide range of agriculture, livestock, nutrition and food security projects as part of USAID’s Feed the Future initiative.

“One of our main roles is to help USAID and partners to better understand the impact of agricultural development projects,” said Andrew Catley, Ph.D., research director for policy process at the Feinstein International Center and principal investigator of AKLDP. “As agriculture grows and commercializes, we need to understand who benefits and who doesn’t, and look at alternative livelihood options for people moving out of agriculture.”

Working with the government of Ethiopia (GoE), aid donors, USAID and local universities and research institutes, the AKLDP will conduct real-time analyses, evaluations and reviews and provide coordination support, The evidence will be used to guide improvements to programming and to support development policies and strategies, particularly those geared towards assisting poorer households to benefit from various agricultural growth programs.

“The Feinstein International Center has led the way on researching just what really happens to people’s livelihoods and economies in crises and disasters, said Peter Walker, Ph.D., the center director of and the Irwin H. Rosenberg Professor of Nutrition and Human Security at the Friedman School of Nutrition Science and Policy at Tufts University. “What we are learning now is that universities also have to play a role in ensuring that the knowledge from that research gets to the farmers, government policy makers and aid workers in a form they can use.”

Previous FIC research conducted through the USAID-funded Pastoralist Livelihoods Initiative in Ethiopia helped set the foundation for the current project. In the last decade, Catley and other FIC researchers have conducted impact assessments on USAID development and humanitarian projects ranging from irrigated agriculture to emergency drought response, with the results contributing to the establishment of good practice guidelines and policy reform.

The $8.5 million AKLDP contract is the largest in the 17-year history of the FIC and expands the center’s presence in Ethiopia. A separate team of FIC researchers is providing the research and evidence-gathering component of another USAID project, Empowering New Generations to Improve Nutrition and Economic opportunities (ENGINE). Implemented by Save the Children International, ENGINE targets Ethiopian mothers with children age 5 and under in an effort to lower the maternal, neonatal and child mortality rates.

The Gerald J. and Dorothy R. Friedman School of Nutrition Science and Policy at Tufts University is the only independent school of nutrition in the United States. The school's eight degree programs, which focus on questions relating to famine, hunger, poverty, and communications, are renowned for the application of scientific research to national and international policy.