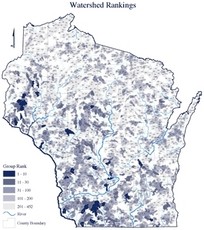 As part of an effort to preserve the future health of Wisconsin's lakes, rivers and streams, researchers at the University of Wisconsin-Madison ranked watershed units around the state. Watersheds with the highest rankings--corresponding to the darkest regions on the map--represent areas that are more likely to respond to ecological restoration measures.

Newswise — Conservation groups, regulatory agencies, farmers and University of Wisconsin-Madison scientists have banded together in an unprecedented effort to preserve the health of Wisconsin's lakes, rivers and streams.

For three years, the unusual consortium - known as the Wisconsin Buffer Initiative (WBI) - has pondered how best to combat ecological offenders such as phosphorus, nitrogen and the sediments that seep from agricultural lands into state waters.

At the heart of the discussion has been the statewide conservation potential of "riparian buffers," or strips of vegetated land that lie adjacent to water. Scientists have known for years that among other ecological benefits, buffers serve as effective natural filters that can absorb pollutants from farmland runoff.

But in order to strategically place them around this state, the first question the WBI sought to answer was: where in Wisconsin's diverse agricultural landscape would riparian buffers have the greatest impact for the lowest cost?

An interdisciplinary UW-Madison team of soil scientists, ecologists and agricultural engineers spent the last few years pondering the question. On Wednesday (Feb. 22), Pete Nowak, a UW-Madison professor of rural sociology, will present their scientific conclusions at a meeting of the Wisconsin Natural Resources Board.

"We hope this project will reestablish Wisconsin as a leader in natural resource management," says Nowak, a soil and water conservationist who chaired the WBI process. "We're really trying to solve the significant problems of Wisconsin in a way that represents the essence of the Wisconsin Idea."

Among the recommendations that Nowak will present is the use of a new watershed ranking system developed by UW-Madison researchers. The new system divides the state into 1,600 hydrological units, each measuring about 18 square miles. Rather than focusing only on degraded areas, the innovative ranking tool prioritizes Wisconsin watersheds according to how well they are likely to respond to restoration measures.

Working from existing data on water flow, soil type, topography and other environmental variables around the state, limnology professor Jake Vander Zanden and aquatic ecologists Jeffrey Maxted and Matt Diebel statistically calculated and ranked the likely restorative impact of riparian buffers in all 1,600 watershed units in Wisconsin. The scientists used three ecological criteria to guide their ranking decision, including: - A watershed's potential to reduce loss of nutrients and sediments;- The probability that its native aquatic species would bounce back and thrive;- And the likelihood that a water body can be saved from eutrophication, the harmful enrichment of water with chemical nutrients.

"We hope that this approach will provide state and local decision makers with the ability to efficiently channel resources into areas that are likely to see improvements," says Maxted, a research specialist at UW-Madison's Center for Limnology.

In the long term, the WBI is also an important opportunity to implement a focused, phase-by-phase approach to help boost Wisconsin water quality, adds Vander Zanden. Rather than targeting every watershed area at once, such an "adaptive management" approach would allow natural resource managers to try different conservation strategies in a small number of watersheds to ascertain which restoration tactics work best. "What's most exciting is that the WBI sets a course for creating important learning mechanisms," Vander Zanden says. "Wisconsin can become an innovative, cutting-edge state through this application of adaptive management."

Though the fate of the state's waters ultimately lie in the hands of legislators and regulators, the WBI process was fruitful in creating a new dialogue between UW-Madison scientists and the rest of Wisconsin, Nowak says. "Our scientists came in as equals and were able to learn the concerns of citizens, while citizens had a chance to learn how difficult it can be to do good and valid science."