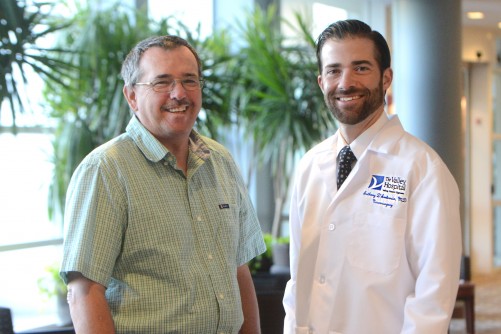 Newswise — If you’ve ever experienced intense, acute pain, you know what a relief it is when the pain finally subsides. But what if the pain doesn’t go away? It was a question to which Charles Schofield was determined to find an answer.

Charles battled searing pain on the right side of his face that would start in his nose, cheeks, gums or teeth before traveling up to his eye and head. The pain was so powerful, it wasn’t long before the most basic tasks became a challenge for the Fair Lawn, NJ, resident. “If I took a shower, as soon as the water hit my head the pain would shoot into my head,” Charles recalls. “Sometimes it would take me a half hour to eat a sandwich.” And forget about touching his face: “The pain would stop me in my tracks,” says Charles.

As time went on, the pain only intensified. “Sometimes it would linger. And the more it occurred, the more it lingered,” Charles says.

The search for answersCharles first sought the advice of his dentist, but the source of the pain wasn’t his teeth or gums. His primary care doctor referred him to a neurologist, who diagnosed Charles with trigeminal neuralgia. In this condition, painful sensations in the face are triggered by the compression of the trigeminal nerve by a blood vessel in the brain. The pain is so intense it has been referred to as the “suicide disease.”

Charles’ doctor recommended medication as a first-line treatment, but its drowsy side effects made his job overseeing operations at Fair Lawn Memorial Cemetery difficult. “I run equipment as part of my job, and I have to be alert,” he notes.

Two conditions, one treatmentThen, Charles heard about Gamma Knife Radiosurgery and the expert team at The Valley Hospital’s Gamma Knife Center, located at the hospital’s Robert & Audrey Luckow Pavilion in Paramus. The decision to consider treatment with the Gamma Knife turned out to be the right call for more than one reason: MRIs and a subsequent angiogram revealed an arteriovenous malformation (AVM), a benign mass of arteries and veins, putting pressure on the trigeminal nerve.

Charles underwent Gamma Knife Radiosurgery in April 2014 to shrink the mass of blood vessels, thus alleviating the pressure on the trigeminal nerve. Throughout the procedure, Charles was kept relaxed and comfortable by the center’s specialized team. “The doctors, nurses and everyone were really nice, and even better, I felt no discomfort during the procedure,” he says.

Relief at lastSeveral months after his Gamma Knife treatment, Charles reports significantly reduced pain, with everyday activities like showering, shaving and eating much more manageable. Follow-up MRIs will help monitor his progress, and the procedure can be repeated if necessary.

For now, though, “the pain comes and goes, but when it does happen it’s very slight,” Charles says. “It only affects my nose and gums now, and it’s not nearly as intense as it used to be—that’s a very good sign.”

A Gamma Knife is not a knife at all. No incisions are made and there is no overnight stay in the hospital. Patients are treated in one session and can resume normal activity shortly after treatment. Valley’s Gamma Knife Center utilizes the Leksell Gamma Knife Perfexion – the most advanced technology in the world.

About The Valley HospitalThe Valley Hospital, a 451-bed, acute care, not-for-profit hospital located in Ridgewood, NJ, is part of Valley Health System, which also includes Valley Home Care and Valley Medical Group. Valley is the recipient of numerous awards and recognitions. These include 10 consecutive recognitions for service excellence by J.D. Power and Associates for inpatient care, six consecutive awards for patient safety and quality care from the Leapfrog Group, and Gold Seals of Approval from the Joint Commission in 12 clinical areas, including six for cancer care, more than any other hospital in the nation. Valley has also been recognized by Healthgrades as one of America’s 100 Best Hospitals for joint replacement and orthopedic surgery. Valley has also been honored three times with “Magnet” designation – the nursing profession’s highest honor. Key services include cardiology, oncology, women’s and children’s services, emergency care, orthopedics, and neurosciences. For more information please visit www.ValleyHealth.com.