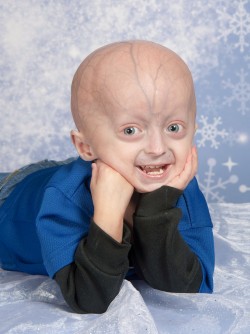 Newswise — LA JOLLA, CA—The current pace of population aging is without parallel in human history but surprisingly little is known about the human aging process, because lifespans of eight decades or more make it difficult to study. Now, researchers at the Salk Institute for Biological Studies have replicated premature aging in the lab, allowing them to study aging-related disease in a dish.

In the February 23, 2011 advance online edition of the journal Nature, Juan Carlos Izpisúa Belmonte, Ph.D. a professor in the Salk Institute’s Gene Expression Laboratory, and his team report that they have successfully generated induced pluripotent stem (iPS) cells from skin cells obtained from patients with Hutchinson-Gilford Progeria Syndrome—who age eight to 10 times faster than the rest of us—and differentiated them into smooth muscle cells displaying the telltale signs of vascular aging.

“The slow progression and complexity of the aging process makes it very hard to study the pathogenesis of cardiovascular and other aging-related disorders,” says Izpisúa Belmonte. “Having a human model of accelerated aging will facilitate the development of treatments and possibly a cure for Progeria and give us new insights into how we age. It may also help prevent or treat heart disease in the general aging population.”

Progeria’s striking features resemble the aging process put on fast-forward and afflicted people rarely live beyond 13 years. Almost all of the patients die from complications of arteriosclerosis—the clogging or hardening of arteries or blood vessels caused by plaques—which leads to heart attack and stroke.

Scientists are particularly interested in Progeria in the hopes that it might reveal clues to the normal human aging process. However, the disease is exceedingly rare and only 64 children living with progeria are known making access to patients very difficult.

Hutchinson-Gilford Progeria Syndrome is caused by a single point mutation in the gene encoding lamin A, which forms a protein scaffold on the inner edge of the nucleus that helps maintain chromatin structure and organize nuclear processes such as RNA and DNA synthesis. The mutation creates an alternative splice site that leads to the production of a truncated version of the protein known as progerin. Unlike the full-length protein, progerin does not properly integrate into the nuclear lamina, which disrupts the nuclear scaffold and causes a host of problems.

“There is also evidence that defective lamin A accumulates during the normal aging process via the sporadic use of the alternative splice site, “ explains Izpisua Belmonte. “Therefore we are very keen on using our in vitro iPS cell-based model to identify new aging markers and explore other aspects of human premature and physiological aging.”

Compared to normal skin fibroblasts, cells from Progeria patients have misshapen nuclei and a range of other nuclear defects, including a disorganized nuclear lamina, loss of super-condensed DNA, telomere shortening and genomic instability. Yet, despite their “old” appearance and characteristics, these cells could be readily converted into iPS cells.

Since lamin A is only expressed in differentiated cells but is absent from embryonic stem cells, he wondered whether iPS cells produce lamin A and/or progerin, which should follow the same expression pattern as lamin A. In his experiments, he couldn’t detect either one. “The biological clock is reset in these cells because lamin A is silenced,” explains Liu.

Upon directed differentiation of Progeria-derived iPS cells into smooth muscle cells the premature aging phenotype, including misshapen nuclei, the loss of gene silencing marks and compromised proliferation, reappeared. Genetically modifying progeria-derived iPS cells to shut down the expression of progerin staved off the premature appearance of aging phenotypes after differentiation. “Transplantation of the progenitor cells derived from the “corrected” progeria iPS cells might hold the promise to treat these progeria children in the future.” says Liu.

Other researchers contributing the study include Basam Z. Barkho, Sergio Ruiz, Jing Qu, Scheng-Liang Yang, Athanasia D. Panopoulos, Keiichiro Suzuki, Leo Kuraian, Christopher Walsh and Ignacio Sancho-Martinez in the Gene Expression Laboratory at the Salk Institute, Dinh Diep and Ho Lim Fung in the Department of Engineering at the University of California, San Diego, James Thompson and John Yates III in the Department of Cell Biology at the Scripps Research Institute and Stephanie Boue at the Center for Regenerative Medicine in Barcelona.

For information on the commercialization of this technology, please contact Claudia Hetzer at 858-453-4100, x 1704 ([email protected]) in the Salk Office of Technology Management and Development.

The study was supported by the California Institute of Regenerative Medicine, the AFAR/Ellison Medical Foundation, the G. Harold and Leila Y. Mathers Charitable Foundation, Sanofi-Aventis, MICINN, the Fundacion Cellex and grants from the National Institutes of Health.

The Salk Institute for Biological Studies is one of the world's preeminent basic research institutions, where internationally renowned faculty probe fundamental life science questions in a unique, collaborative, and creative environment. Focused both on discovery and on mentoring future generations of researchers, Salk scientists make groundbreaking contributions to our understanding of cancer, aging, Alzheimer's, diabetes and infectious diseases by studying neuroscience, genetics, cell and plant biology and related disciplines.