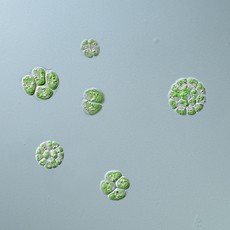 In the unicellular green alga Chlamydomonas reinhardtii bursts of rapid division cycles produce clusters of daughter cells, a process that is controlled by the retinoblastoma (RB) tumor suppressor pathway.?The clusters with small cells are from a strain that is missing RB, and the clusters with large cells are missing a protein that is repressed by RB.

Newswise — A microscopic green alga helped scientists at the Salk Institute for Biological Studies identify a novel function for the retinoblastoma protein (RB), which is known for its role as a tumor suppressor in mammalian cells. By coupling cell size with cell division, RB ensures that cells stay within an optimal size range.

Their findings, which will be published in the October 12 online edition of PLoS Genetics, show that RB blocks cells from dividing before they reach a minimum size and could provide new insights into the origins of cancer.

"Being the right size is very important for cells because their physiology changes quite dramatically when the surface-to-volume ratio changes," explains senior author James Umen, Ph.D., an assistant professor and Hearst Endowment Chair in Salk's Plant Biology Laboratory. "The human body is composed of trillions of cells, each of which must coordinate its growth and division in order to maintain size equilibrium," he adds.

This process is very tightly regulated and any given cell type will always stay within a very narrow size range, but the means by which cell size is determined remain mysterious. In proliferating cells, control mechanisms termed checkpoints are thought to prevent cells from dividing until they reach a specific size, but the nature of the checkpoints has proved difficult to dissect.

"In mammalian cells it is very hard to separate size control from cell cycle control because it is very easy to mess up cell size as an indirect consequence of manipulating cell cycle rates," says Umen.

The tiny single-celled alga Chlamydomonas reinhardtii provided a model organism to study the link between cell size and growth. In nature, the organism is found in fresh and brackish water and in all kinds of soil. Its close relatives have adapted to the harsh conditions found in underwater thermal vents and even to life under the Antarctic ice shelf. In the lab, C. reinhardtii has been used to investigate agricultural, energy-related and medical questions.

Chlamydomonas is particularly well suited as an organism to dissect the control mechanisms behind cell size not only because of its simplicity but due to its peculiar cell cycle: during a prolonged growth phase cells enlarge to many times their original size and then suddenly divide several times in rapid succession. Despite this rapid-fire response, cell division is tightly controlled by a sizing mechanism that ensures daughter cells are never too large or too small.

In the course of earlier work, Umen identified an RB homolog encoded by the mat3 gene in C. reinhardtii and later discovered algal counterparts of other players in the RB pathway in humans and mice. To analyze their function in Chlamydomonas, the Salk team isolated cells with mutations in individual members of the RB signaling pathway " and things immediately started to go wrong.

Explains Umen, "Cells with mutations in the C. reinhardtii RB homolog start dividing prematurely, and continue dividing excessively, producing abnormally small daughter cells. Mutations in the algal versions of two key targets of the RB tumor suppressor have exactly the opposite effect of RB mutations, resulting in abnormally large cells that don't divide when they should." These findings demonstrate that once cells reach a critical size, they need those two RB target proteins to divide on schedule.

"The interesting thing for us is that the whole genetic module has been conserved from algae to plants to humans," says Umen. "It's been controlling cell division for well over a billion years. As multicellular organisms evolved, the RB pathway was co-opted to integrate growth factor signals, but its original purpose in single cells was more fundamental: to couple cell size to cell cycle progression," he adds.

Recently, evidence has emerged that animal cells also have size checkpoints whose nature is still unknown. "Our results open up the possibility that the ancient size control function for the RB pathway we discovered in Chlamydomonas may still be there in animal cells, but was integrated into a larger network that also responds to extracellular input from growth factors. It will be an interesting challenge now to dissect out that function for RB in animal cells," he says.

A high resolution version of the image is available upon request.