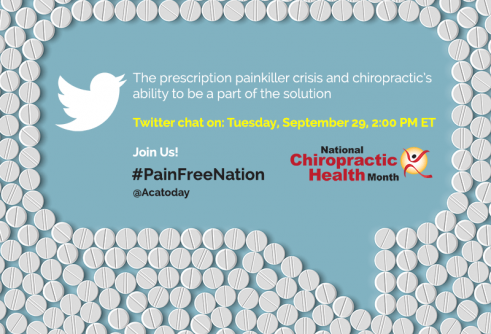 Newswise — Arlington, Va. - The American Chiropractic Association (ACA) is hosting its first Twitter chat focused on addressing the overuse and abuse of opioid painkillers in the United States on Tuesday, Sept. 29, from 2 p.m. to 3 p.m. ET using the hashtag #PainFreeNation. The chat will focus on ways to heighten awareness of conservative approaches to pain that can potentially help people lessen their dependence on opioids and educate the public on simple ways to enhance strength and avoid pain and injury in everyday life. "Now, more than ever, it's vital that the chiropractic profession repeat and amplify its message that a conservative care-first approach to pain management makes clinical and economic sense," said ACA President Anthony Hamm, DC. "Generating more awareness about this critically important issue is key to curbing opioid overuse and abuse, and I'm pleased that so many doctors of chiropractic are answering the call to do just that." The media continues to cover the issue of pain extensively, following the Centers for Disease Control and Prevention's declaration that the overuse and abuse of opioid painkillers in the United States is an "epidemic." In 2013, there were 16,235 deaths involving prescription opioids, an increase of 1 percent from 2012. Total drug overdose deaths in 2013 hit 43,982, up 6 percent from 2012*. The #PainFreeNation Twitter chat will precede National Chiropractic Health Month (NCHM) in October, when ACA will work with thousands of chiropractic physicians, chiropractic assistants (CAs) and chiropractic doctoral students nationwide to bring attention to the public health crisis caused by pain, and in particular the overuse of prescription painkillers. The campaign is part of the profession's ongoing efforts to educate the public about the value of exhausting conservative forms of care for both acute and chronic pain before resorting to higher risk options, such as opioids. What: National Chiropractic Health Month 2015 Twitter Chat (#PainFreeNation)When: Tuesday, Sept. 29, 2 p.m. to 3 p.m. ETWho: Hosted by @ACATodayHow to Participate: Submit your questions and comments on Twitter using the hashtag #PainFreeNation starting Thursday, Sept. 24, through 3 p.m. Tuesday, Sept. 29. A transcript of the chat will be made available on ACA's Storify profile, following the event.To learn more, visit www.acatoday.org/NCHMtwitterchat and follow ACA on Twitter at @ACAtoday and on Facebook, LinkedIn and Instagram. *Centers for Disease Control and Prevention. Wide Ranging Online Data for Epidemiologic Research (CDC WONDER). Available at: http://wonder.cdc.gov/. 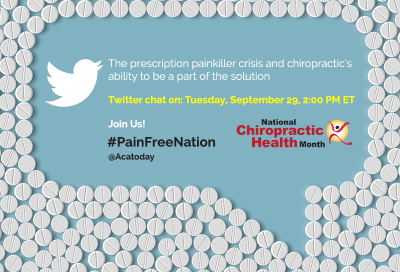