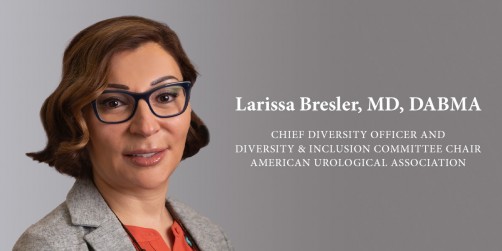 The AUA first formed a Diversity & Inclusion Task Force in December 2020, and its final report to the board in February 2022 resulted in the establishment of the AUA Diversity & Inclusion Committee. As its inaugural chair, Dr. Bresler will advise the Board of Directors on vision, strategy, and implementation of diversity initiatives in line with the Task Force's recommendation. Her responsibilities include identifying and advising on potential solutions to meet diversity gaps, the implementation of diversity initiatives, and methods to recruit, support and retain diverse AUA leaders and volunteers.

"I have championed diversity throughout my career and strive to build a legacy paving the road for others, identifying a need or gap in opportunities for URM [underrepresented minority] groups, LGBTQ+ persons and women, and closing that gap by pioneering novel initiatives," said Dr. Bresler. "I am very excited about the opportunity to work with the Diversity & Inclusion Committee and other AUA leaders to shape D&I priorities and initiatives for the AUA and our profession."

Among her many plans for the diversity & inclusion committee, Dr. Bresler is particularly excited to create mentorship opportunities for underrepresented minority groups in urology. She also hopes to promote and improve transparency around diversity, equity and inclusion (DEI) efforts at each step of AUA leadership and award process in addition to expanding and highlighting DEI and healthcare disparities efforts in annual meeting agendas. The committee will be working with the AUA leadership to present a newly created DEI award to recognize workplaces that exemplify DEI efforts as well as increasing access for physicians and patients. Steps such as these will help ensure that the AUA is making an active effort towards diversity and inclusion at every level.

Dr. Bresler has championed DEI for her entire career, spanning over 20 years. She first got involved in advocacy work through volunteering in the LGBTQ+ community as well as providing prostate cancer screenings in predominantly African American communities on the south side of Chicago during her residency under the direction of Robert Flanigan, MD, department of urology at Loyola University Medical Center.  An active member of the AUA since 2003, Dr. Bresler has a proven track record of advancing DEI and education initiatives in various leadership positions. Nationally, she sat on the Federal Women's Task Force that helps promote equity and inclusion for federal workers and she recently completed her term as senior editor and consultant of Urology Basics and Core Topics with the AUA's Core Curriculum Committee. She has participated on the AUA's Practice Guidelines Committee. Dr. Bresler is also a member of the North Central Section (NCS) of the AUA's Board of Directors, Long Range Planning and Education Committees and chairs the NCS Women in Urology Committee. She is also serving as a first woman president of the Medical Acupuncture Research Foundation (MARF) and sits on the American Academy of Medical Acupuncture board of directors.  Locally, she has championed diversity initiatives as the President of the Chicago Urological Society.

Dr. Bresler is an associate professor of urology, obstetrics and gynecology at the Loyola University Medical Center. She obtained her MD from Oregon Health and Sciences University where she was inducted into the AOA honor society, and completed her urology residency at Loyola University Medical Center and completed the AUA leadership program in 2019. Dr. Bresler is a board certified physician-acupuncturist as well as a resiliency and wellness coach. She has published more than 50 articles and book chapters and has received numerous honors and awards, including multiple teaching awards, the Best of AUA (Female Urology) and Illinois Magazine's Top Urologist 2021-2022.

Loyola Medicine, a member of Trinity Health, is a nationally ranked academic, quaternary care system based in Chicago's western suburbs. The three-hospital system includes Loyola University Medical Center, Gottlieb Memorial Hospital, MacNeal Hospital, as well as convenient locations offering primary care, specialty care and immediate care services from more than 1,500 physicians throughout Cook, Will and DuPage counties. Loyola is a 547-licensed-bed hospital in Maywood that includes the William G. and Mary A. Ryan Center for Heart & Vascular Medicine, the Cardinal Bernardin Cancer Center, a Level 1 trauma center, Illinois's largest burn center, a certified comprehensive stroke center and a children’s hospital. Having delivered compassionate care for over 50 years, Loyola also trains the next generation of caregivers through its academic affiliation with Loyola University Chicago’s Stritch School of Medicine and Marcella Niehoff School of Nursing. Established in 1961, Gottlieb is a 247-licensed-bed community hospital in Melrose Park with the Judd A. Weinberg Emergency Department, the Loyola Center for Metabolic Surgery and Bariatric Care and the Loyola Cancer Care & Research Facility at the Marjorie G. Weinberg Cancer Center. MacNeal is a 374-licensed-bed teaching hospital in Berwyn with advanced medical, surgical and psychiatric services, acute rehabilitation, an inpatient skilled nursing facility and a 68-bed behavioral health program and community clinics.

Trinity Health is one of the largest not-for-profit, Catholic health care systems in the nation. It is a family of 115,000 colleagues and nearly 26,000 physicians and clinicians caring for diverse communities across 25 states. Nationally recognized for care and experience, the Trinity Health system includes 88 hospitals, 131 continuing care locations, the second largest PACE program in the country, 125 urgent care locations and many other health and well-being services. Based in Livonia, Michigan, its annual operating revenue is $20.2 billion with $1.2 billion returned to its communities in the form of charity care and other community benefit programs.