An award-winning author whose work was sampled by singer Beyoncé for the Grammy-nominated song ‘Flawless,’ Chimamanda Ngozi Adichie will speak at Wellesley College’s Commencement Exercises on Friday, May 29, at 10:30 a.m. 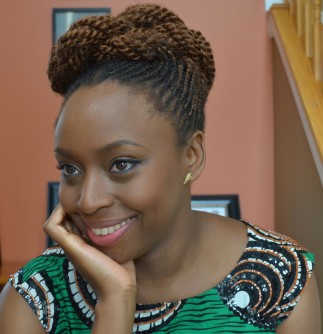 Chimamanda Ngozi Adichie will address the members of the Wellesley College Class of 2015 and an international audience of their family and friends at Wellesley’s 137th Commencement Exercises on Friday, May 29, at 10:30 a.m.

Newswise — Wellesley, Mass. – Renowned novelist Chimamanda Ngozi Adichie will address the members of the Wellesley College Class of 2015 and an international audience of their family and friends at Wellesley’s 137th Commencement Exercises on Friday, May 29, at 10:30 a.m. Students drive Wellesley’s commencement speaker selection process and, in keeping with Wellesley tradition, Adichie was announced as the speaker at the College’s “Senior Soiree” on Thursday, April 9.

“Chimamanda Ngozi Adichie is a talented writer, a distinguished humanitarian, and unabashed feminist whose thought-provoking work has inspired a generation,” said President H. Kim Bottomly. “Simply put, she is the perfect choice to send off our graduating seniors as they get ready to make their mark on the world. We can’t wait to welcome her to Wellesley.”

Senior Class President Sahitya Raja, a Biological Sciences major and Women’s and Gender Studies minor from Whitefish Bay, Wisconsin, said she is thrilled about the choice, calling Adichie an “inspiring figure.” Raja said, “Adichie, through humor and anecdote, is able to express incredibly complex concepts facing women today… I believe she will be able to directly address the issues we as a class will be confronted with as we prepare to leave Wellesley.” Ahilya Chawla, co-vice president of the Class of 2015, a Political Science major from Mumbai, India, added, “in a world where we're always trying to get thinner, better, smarter -- her message that women should not 'shrink themselves' is applicable on so many levels.”

Adichie said, “I greatly admire and respect Wellesley College. Its mission—to provide an excellent liberal arts education for women who will make a difference in the world—is close to my heart. We need to encourage more women to dare to change the world. It is an absolute honour to be chosen by the Wellesley College senior class as commencement speaker.”

Chimananda Ngozi Adichie, an award winning writer whose TEDx Talk was sampled by Beyoncé for her Grammy-nominated song Flawless, is the author of the novels Purple Hibiscus, which won the Commonwealth Writers’ Prize and the Hurston/Wright Legacy Award, and Half of a Yellow Sun, which won the Orange Prize and was a National Book Critics Circle Award Finalist; a New York Times Notable Book; and a People and Black Issues Book Review Best Book of the Year. She is also author of the story collection The Thing Around Your Neck. Her latest novel is Americanah, which won the National Book Critics Circle Award for Fiction, the Chicago Tribune Heartland Prize for Fiction, and was named one of the New York Times Ten Best Books of the Year.

Adichie’s work has been translated into thirty languages and has appeared in The New Yorker, Granta, The O. Henry Prize Stories, the Financial Times, and Zoetrope, among other publications. Adichie, the recipient of a MacArthur Foundation Fellowship, divides her time between the United States and Nigeria.