Animal Burrows in Antarctic Tell of a Much Warmer Past

30-May-2008 2:15 PM EDT, by Society of Vertebrate Paleontology
favorite_border 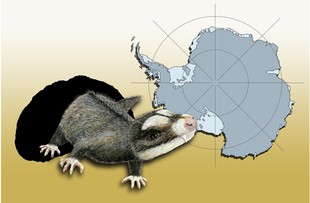 Newswise — Today Antarctica is a harsh world. Devoid of trees and bushes, it is largely covered in snow and ice and battered by frigid winds. There are no land-based backboned animals that inhabit modern Antarctica " all of the penguins and seals that we imagine on the Antarctic ice are dependent on the sea. But this isolating Antarctic icebox is relatively new in geological terms, and new fossil finds are shedding light on what Antarctica was like 250 million years ago.

In the latest issue of the Journal of Vertebrate Paleontology, Chris Sidor of the University of Washington and his colleagues Molly Miller of Vanderbilt University and John Isbell of the University of Wisconsin-Milwaukee report the discovery of a number of fossilized burrows of land-living animals in Antarctica and paint a picture of an ice-free world. The first type of burrow was found in the Beardmore Glacier region, approximately 400 miles from the South Pole. It is almost 250 million years old and resembles burrows known in South Africa of a similar age. The South African burrows have been found containing the fossilized skeleton of cat-sized mammal-like reptile called Thrinaxodon. The burrow from Antarctica "was probably made by the same type of animal," commented Sidor. The second type of burrow is of a smaller variety and was discovered in an area known as Victoria Land. Again, comparison with similar burrows in South Africa provides clues to the original inhabitants of the burrow. Miller noted that they were probably made by "mole-sized reptiles known as procolophonids. But until we find the animal in the burrow we can't be sure. It's also possible that they were made by juveniles of larger animals."

Isbell noted that 250-200 million years ago the world was a very different place and "as far as we can tell the poles remained ice free." That is not to say that the winter months were balmy. The latest fossil finds from the polar regions certainly provide strong support for this view. "The burrows were probably important shelters for these animals," added Sidor. The burrows and dens add to the important record of life that existed on Antarctica before the ice.

About the Society of Vertebrate PaleontologyFounded in 1940 by thirty-four paleontologists, the Society now has more than 2,000 members representing professionals, students, artists, preparators, and others interested in VP. It is organized exclusively for educational and scientific purposes, with the object of advancing the science of vertebrate paleontology.