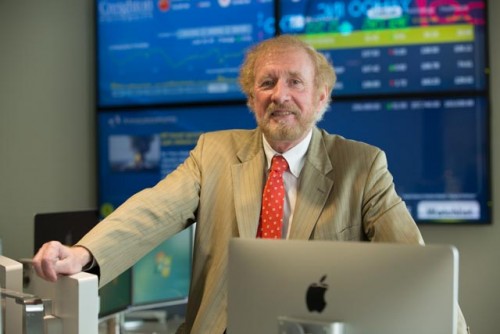 April Survey Results at a Glance:• The Rural Mainstreet Index remained below growth neutral for April, signaling pullbacks in economic activity. • More than one-third of bankers reported that the strong dollar is having negative impacts on their local economy. • Farmland prices declined for the 17th straight month. • Agriculture equipment sales were very weak, but up slightly from March’s record low. • Approximately 75 percent of bank CEOs reported that Farm Credit represented the greatest competitive threat to their operations.

Newswise — OMAHA, Neb. – While the Creighton University Rural Mainstreet Index for April rose slightly from March’s weak reading, it remains below growth neutral, according to the monthly survey of bank CEOs in rural areas of a 10-state region dependent on agriculture and/or energy.

“The stronger U.S. dollar continues to be a drag on the Rural Mainstreet economy. This month more than one-third, or 34.0 percent of the bank CEOs reported that the strong U.S. dollar was having a negative impact on their local economy. Gains in the U.S. dollar have made U.S. goods, especially agricultural and energy products, less competitively priced abroad," said Ernie Goss, Jack A. MacAllister Chair in Regional Economics at Creighton University's Heider College of Business.

Farming and ranching: The farmland and ranchland-price index for April sank to 33.4 from March’s very weak 39.4. “Even though crop prices have stabilized, demand for farmland was weak, pulling agricultural land prices down again. This is the 17th straight month the index has moved below growth neutral,” said Goss.

Even though farmland prices continue to decline, expected cash rents for non-irrigated agricultural land continued to rise. In January of this year, bankers estimated that average 2015 cash rents would be $214. This month an average of $227 was recorded.

According to Todd Douglas, CEO of First National Bank in Pierre, S.D., “With GPS-based yield mapping, we are seeing some of the smarter operators starting to figure out which land is making them money and which is not. So far when someone walks away from some poorer ground, there still seems to be a greater fool ready to step up and rent it.”

The April farm-equipment sales index increased to a frail 15.6 from March’s record low of 15.2. The index has been below growth neutral for 21 straight months. “With farm income expected to decline for a second straight year, farmers have become very cautious regarding the purchase of agricultural equipment,” said Goss.

Banking: The April loan-volume index soared to 69.0 from March’s 64.9. The checking-deposit index sank to 50.1 from March’s 56.4, while the index for certificates of deposit and other savings instruments fell to 38.0 from March’s 44.7.

According to Pete Haddeland, CEO of the First National Bank in Mahnomen, Minn, “Cash rents are starting to come down. Most of our Farmers are still in good shape, but they are borrowing more this year.”

Hiring: Despite weaker crop prices and pullbacks from businesses with close ties to agriculture and energy, Rural Mainstreet businesses continue to add workers to their payrolls. The April hiring index improved to a solid 54.2 from March’s 52.2. “We have yet to measure any significant decline in employment for the energy sector in the region and for businesses linked to agriculture. I expect that to change in the months ahead as lower energy and agricultural prices work their way through the economy,” said Goss.

Confidence: The confidence index, which reflects expectations for the economy six months out, dipped to 47.0 from 47.8 in March. “The negative trend in farmland prices, agricultural equipment sales, and oil prices have negatively affected the outlook of Rural Mainstreet bank CEOs,” reported Goss. Home and retail sales: The April home-sales index climbed to 58.2 from March’s 55.5. The April retail-sales index increased to a frail 44.0 from 40.4 in March. “Much like in urban areas, retail sales remain very weak even with the reduction in fuel prices,” said Goss. Each month, community bank presidents and CEOs in nonurban, agriculturally and energy-dependent portions of a 10-state area are surveyed regarding current economic conditions in their communities and their projected economic outlooks six months down the road. Bankers from Colorado, Illinois, Iowa, Kansas, Minnesota, Missouri, Nebraska, North Dakota, South Dakota and Wyoming are included. The survey is supported by a grant from Security State Bank in Ansley, Neb.

This survey represents an early snapshot of the economy of rural, agriculturally and energy-dependent portions of the nation. The Rural Mainstreet Index (RMI) is a unique index covering 10 regional states, focusing on approximately 200 rural communities with an average population of 1,300. It gives the most current real-time analysis of the rural economy. Goss and Bill McQuillan, former chairman of the Independent Community Banks of America, created the monthly economic survey in 2005.

Colorado: After rising above growth neutral for 11 straight months, Colorado’s Rural Mainstreet Index (RMI) has moved below the 50.0 threshold for the last three months. While the April RMI rose to 45.1 from March’s 40.6, it remains below growth neutral. The farmland and ranchland-price index increased to 40.3 from March’s 35.6. Colorado’s hiring index for April advanced to 54.2 from 48.6 in March.

Illinois: The RMI for Illinois plunged to 45.7 from 60.5 in March. The Illinois farmland-price index fell to 38.7 from March’s much healthier 53.2. The state’s new-hiring index dipped slightly to 52.9 from 53.4 in March. Jim Ashworth, president of Carlinville National Bank in Carlinville reported that, “Wet conditions have stalled spring preparation and planting for grain farmers, who are concerned about not being able to apply anhydrous ammonia in the fall, and now the demand may exceed the infrastructure to deliver it efficiently.”

Minnesota: The April RMI for Minnesota jumped to 45.6 from March’s 26.8. Minnesota’s farmland-price index improved to 36.1 from 33.2 in March. The new-hiring index for the state expanded to 50.9 from March’s 48.8. Brian Nicklason, CEO of Woodland Bank in Remer, reported, “The local economy appears resilient despite several recent announcements related to the mining industry in northeast Minnesota. Job Layoffs are being announced that will likely have some impact on the economy over the next 12 months. This could be offset by hiring in other segments of the local economy and/or a good summer tourist season.”

Wyoming: The April RMI for Wyoming advanced to a weak 43.6 from last month’s 41.9. The April farmland and ranchland-price index sank to 31.6 from March’s 34.1. Wyoming’s new-hiring index declined to 47.2 from March’s 47.4. Next month’s survey results will be released on the third Thursday of the month, May 21. Follow Ernie Goss on Twitter www.twitter.com/erniegoss For historical data and forecasts, visit our website at: http://business.creighton.edu/organizations-programs/economic-outlookFor ongoing commentary on recent economic developments, visit our blog at: www.economictrends.blogspot.com