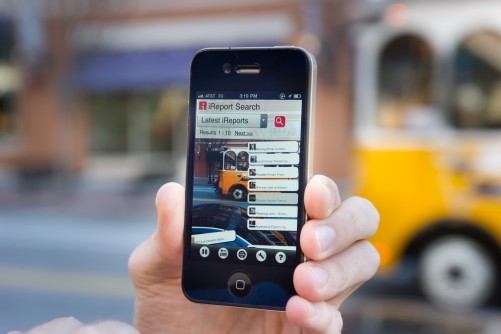 Blair MacIntyre and his Augmented Environments Lab developed Argon to move the Web into the world. It does so by taking video from the phone’s camera and rendering graphical content on top of the video to provide users with an experience that merges space with cyberspace.

Blair MacIntyre, associate professor in Georgia Tech's College of Computing and member of Tech's GVU Center, discusses the release of Argon, the first mobile augmented reality browser based on open Web standards. MacIntyre and his Augmented Environments Lab in the School of Interactive Computing developed Argon to move the Web into the world. It does so by taking video from the phone's camera and rendering graphical content on top of the video to provide users with an experience that merges space with cyberspace. The Argon mobile augmented reality browser was developed with funding support from Alcatel-Lucent through its University Innovations Program. Argon is available now for free download at Apple's App Store.

Newswise — You’re in a bookstore checking out the bestsellers. You scan the book with your iPhone camera and immediately see information floating in the air, provided by the store’s information channel. You add your own book club channel to the view, overlaying additional reviews from friends and other relevant information from shopping sites on the Web.

While skimming the book reviews, you notice a note that looks as if it’s floating in the air on your personal channel, reminding you about a nearby restaurant you’ve been meaning to visit. You buy the book and head to lunch, looking forward to reading a bit over lunch before heading back to work.

No, this isn't you in 20 years --- it's a scenario possible in the very near future thanks to a new technology designed to bring the Web off your hand-held device and into the real world. Developers hope to port Argon to other platforms, such as Android, in the near future.

“Our goal is to provide a foundation for millions of Web developers to begin writing applications so they can provide users with new experiences that are unique to the world of AR,” said Blair MacIntyre, KHARMA project director and associate professor in the School of Interactive Computing at Georgia Tech. “Basically, we want to move the Web into the world.”

The Argon mobile augmented reality browser was developed with funding support from Alcatel-Lucent through its University Innovations Program.

"Alcatel-Lucent is actively involved in supporting open standards across mobile and fixed devices to enable consumers and business users to enjoy rich communication anywhere, anytime and over any device. Our participation as a project sponsor in Georgia Tech's development of the world’s first open standards-based mobile augmented reality browser is an example of that," said Marc Goodman, director of Alcatel-Lucent's University Innovations Program.

Augmented reality allows people to view the physical world with computer media overlaid on top of it. The approach is often suggested as a way of adding information to the world and improving the way that people can interact with that information, but can also be used for games, art or any imaginable application where the media content relates to nearby people, places or things.

Argon marks the first significant step in marrying the power of the Internet to the world of augmented reality. Until now, most AR applications had to be developed and deployed on the user’s mobile device, limiting the reach of the technology. Commercial attempts at creating more general AR browser platforms have offered limited content and interaction options.

What makes Argon different from standard mobile Internet browsers is its ability to put content out into the world. Argon takes video from the phone’s camera and renders graphical content on top of it. With this initial release, any content that can be displayed in the iPhone’s Mobile Safari Web browser can be pushed out into the world on virtual billboards. Other content can be created using forms and Javascript. Future releases will also include support for a range of 3D content.

“Basically, there are lots of little programs that provide the ability to use AR to put some information out in the world around you. Some, like these early browsers, also allow users to contribute content, but none allow the full range of dynamic content, control and interactivity of the Web, with everything hosted on your own servers,” said MacIntyre.

By building on top of open Web technologies and standards, the KHARMA development platform opens the door to AR applications with a full range of possible interactivity, collaboration, Web mashups and connections to cloud services that users and developers have come to rely on.

For example, rather than just displaying the locations of businesses or other nearby places, you can customize the content delivery as you desire. When you use the browser to view the channel for a theater, the channel might display the movie times, allow you to view previews of the films, or create in-browser games and interactive experiences tied to the movies you choose. Those games might be collaborative with other nearby viewers, or with people at another theater across town or across the country. The possibilities are endless.

“If you look at the history of any media, such as film or the Web, initially the content creators are the same people who created the technology,” said MacIntyre. “But at some point that begins to change, and tools come along that allow many people to begin to work with the technology. When that happens, we begin to discover what the medium is truly about. With the KHARMA specifications, and the Argon browser, we want to put AR into the hands of the millions of people who know how to create websites, and hopefully take a step toward understanding the potential of AR.”