As a Utah law professor fights for the victims of Jeffrey Epstein, students prepare him for a battle ahead 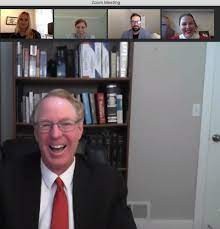 No matter that Cassell is a former federal judge and a nationally renowned victim advocate—all factors that might intimidate the most confident of law students when presented with an opportunity to challenge a professor.

Allred and classmates Mikayla Irvin, Cate Vaden and Jacob Roberts grilled Cassell on legal theories he presented to them in advance of arguments he will present to the Eleventh Circuit Court of Appeals on behalf of victims of Jeffrey Epstein.

Cassell’s arguments before the court on Thursday are the latest developments on a case that has captured international attention —and a case that Cassell has worked on for 12 years so far involving Epstein, the multimillionaire who died in a New York jail cell in 2019 after being arrested on charges related to sex crimes involving minors.

Cassell views his hearing before a panel of 11 judges as a chance to bring light to an important issue for the crime victims’ rights movement: Whether crime victims have rights before charges are formally filed or only after prosecutors decide to file charges in court.

“In the Epstein case, the prosecutors did not give victims’ rights because they never filed federal charges against him. An Eleventh Circuit panel ruled last April, 2-1, that the prosecutors acted within their discretion in not telling victims what happened in the case. I’m hoping to persuade the full panel that this earlier panel decision was wrong and that victims have rights in federal cases when prosecutors and defense attorneys are negotiating a deal that resolves a criminal case,” said Cassell.

Cassell is ready for the challenge.

The Epstein case has taken a winding path through the legal system. According to court documents filed by Cassell, between 1999 and 2007, Epstein sexually abused more than 30 minor girls, including two clients he represented, Jane Doe 1 and Jane Doe 2. The FBI investigated the case for violations of federal law.

Ultimately, prosecutors in the U.S. Attorney’s Office for the Southern District of Florida reached a non-prosecution agreement with Epstein, blocking not only his prosecution for federal sex crimes but also that of certain co-conspirators, in exchange for Epstein’s agreement to plead guilty to two low-level Florida state offenses, Cassell said.

When Epstein’s sexual abuse victims became concerned about what was happening in their cases, Cassell and co-counsel on the case filed a lawsuit alleging that the office had violated the victims’ rights under the federal Crime Victims Rights Act (CVRA). The district court ruled in the victims’ favor that the prosecutors had violated their rights under the CVRA. But later the court dismissed the case without awarding the victims any  remedy—leading to the appeal to the Eleventh Circuit.

While the Epstein case has presented a once-in-a-lifetime professional experience for Cassell, he has also used the experience as a learning tool for his students.

He is among faculty members who guide students on cases as part of the law school’s Victims’ Rights Clinic, where law students learn how to be advocates in difficult cases. To prepare for his hearing before the Eleventh Circuit, he sought out the U’s National Moot Court team to play the role of judges as we worked to sharpen his arguments.

The students gave him significant pushback, challenges that Cassell welcomed. The group was required to adhere to confidentiality standards when reviewing Cassell’s brief. The task gave them valuable legal experience and allowed them to work on a case that has been in the international spotlight.

“The questions that the students asked were very similar to questions that I have received already from judges handling the case. This made it clear that they read the briefs in the case and understood the thrust-and-parry of the various arguments and counterarguments on both sides.   They also thought of several new arguments that I hadn’t thought of before, which I will try to weave into my presentation to the Eleventh Circuit,” said Cassell.

The exercise gave students real-world experience outside of the classroom, he noted.

“ A lot of time in law school is spend mastering legal doctrine. But it is also important that students master legal skills – particularly presenting arguments effectively to judges and juries. This moot court gave the students a chance to see how I am trying to persuade judges to agree with my position in an important, “real world” case. Because the case is on-going, the students agreed to confidentiality of our practice session. And that way, they could see how argument are formulated—and re-formulated—so as to be the most effective in conveying a legal position. Because I have an active pro bono legal practice representing crime victims, I’m able to involve my students in writing briefs and preparing for arguments, putting them in a better position to do the same thing when they become practicing lawyers,” said Cassell.

“It is not every day that a lawyer, let alone a law professor, has an oral argument in front of an appellate court – let alone the U.S. Court of Appeals for the Eleventh Circuit.  Given this is a rare opportunity, it was a tremendous chance for our students to learn how to best prepare for an appellate argument.  It was also a great opportunity for students to engage in legal analysis as they had to prepare for the argument and assume the role of an appellate judge – trying to find holes in Professor Cassell’s argument.  The opportunity to challenge a professor in an area in which they are a national expert, such as Professor Cassell is in the area of victim rights, is a tremendous opportunity and a great way for students to practice and engage in important legal skills,” said Kronk Warner.

After Thursday’s oral argument, the en banc Court will take the case under advisement. A written decision is expected in approximately six months.

The hearing is open to the public and available via Zoom at 8 a.m. MST:https://www.ca11.uscourts.gov/live-streaming-oral-arguments