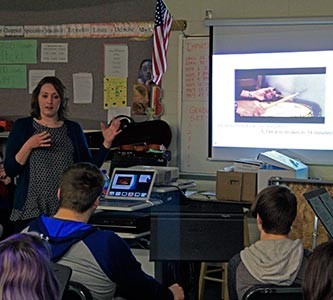 Newswise — Over the 15-minute course of Maurice Ravel’s Bolero, the snare drummer raps out 5,144 individual beats.

In one of Felix Mendelssohn’s early octets, the composer packed 5,595 piano notes into a piece designed to be played in about four minutes.

Listen to one of Louis Armstrong’s more frenetic trumpet solos or the tippling keys of a Duke Ellington composition, or heck, the last five minutes of Lynyrd Skynyrd’s “Free Bird,” and there it is — lots of notes at speed.

Throw into the mix that on top of the performances, musicians practice for hours on end and you start to get the point third-year Creighton University occupational therapy student Ashley Enke has been trying to make for two years: the pursuit of musical artistry, in addition to being technically, mentally and aesthetically demanding, can be physically punishing.

“Musicians are the athletes of the small muscles,” said Enke, who just returned from the American Occupational Therapy Association’s annual meeting where she delivered a paper on musicians and injuries. “If you compare an athlete to a musician, they’re both spending lots of time in practice, they’re both in high-stress fields, they both deal with lots of repetitive motions. And in music, it’s so competitive that you don’t even think about the injury or the pain. If you’re a professional musician, you know someone is right behind you to take your job, so you don’t rest even for a moment. The old saying, ‘No pain, no gain,’ is very real for musicians.”

Enke knows. Since fifth grade, Enke has played the oboe. She’s also turned a hand at the piano and the string bass. She was in the symphony orchestra during her undergraduate years at St. Olaf College and, when time allows, she substitutes with Orchestra Omaha.

For years, Enke kept a foot in two camps — science and music — but always with the idea that they were separate pursuits: one a potential career, the other a hobby. But just after her first year in the Department of Occupational Therapy, one of her professors, Helene Lohman, OTD, OTR/L, told Enke there was no reason the science and the music had to stay separate.

“She said there are many OTs who work with musicians, given the prevalence of injury,” Enke said. “There are some studies showing as many as 84 percent of symphony orchestra musicians experience some sort of playing-associated injury. It’s not something most people think about. We go to concerts, it sounds lovely and we think, ‘Well, the musicians are talented.’ What most of us don’t realize is the countless hours upon hours of repetitive practice that goes into every performance.”

Ever since, Enke has found ways to blend her interests and to advocate for musicians to take better care of themselves physically and to not ignore the pain of an injury. She’s interested in starting early interventions for budding players, getting them just as they’re starting to pick up their instruments and hopefully instilling good habits that go alongside practice.

At the AOTA conference in 2016, Enke delivered her first paper on injuries in musicians, focusing on the neuromuscular underpinnings of injuries, specifically focal hand dystonia, a task-specific movement disorder prevalent in people who use their fine muscles repetitively.

“I think this is great for Ashley as she completes her degree,” said Gail Poskey, PhD, OTR/L, one of Enke’s faculty mentors. “She is following her area of passion and diving into what research is available, what research is needed, and how her future interventions can impact her client in a positive and rewarding way. We’re very excited to see how her passion as an accomplished musician, added with her energy, talent and scholarly endeavors shapes her new career as an occupational therapist. At the same time, she is giving back to the profession and her clients.”

For eight weeks earlier this year, Enke did a rotation at the Performing Arts Medicine Clinic at the Courage Kenny Rehabilitation Institute of Abbott Northwestern Hospital in Minneapolis. While there, she saw patients with injuries across the spectrum, incurred while playing an array of instruments.

In addition to injuries sustained as a result of playing music, Enke also worked with patients who suffered indirect injuries affecting their ability to play — incidents like car crashes or stroke. In those cases, she said professional musicians are often outliers on the rehabilitation scale, needing to return to their livelihood playing at the same level as when they were injured.

Ultimately, Enke said she’d like to develop a program to help younger musicians learn appropriate practice habits and warm-up routines before they set off on marathon practice sessions. She also hopes to educate music teachers and musicians of all ages and skill levels on the debilitations constant practice and performance can cause.

“There’s an opportunity here to meet with musicians when they’re young and talk about the importance of not overdoing it and taking care of yourself, even in the long hours of practicing,” she said. “Getting music teachers involved makes it more likely students will get on board. If we can spread the message that there is a right way to take a break and to save the strain on those fine muscles, I think, in the end, the music world benefits.”