Big Brain Not Key to Evolutionary Success in Bats 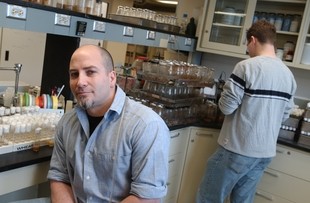 Newswise — Syracuse University biology professor Scott Pitnick knows a lot about the birds and the bees (or in this case, bats). He teaches courses in evolution and population biology, and researches topics such as sexual selection, sexual conflict and speciation. His latest research sheds light on a little-explored area of evolutionary biology: the contribution of sexual selection to brain evolution. "The brain can be considered the most important 'sex organ,'" says Pitnick. "Nevertheless, the relationship between breeding system and relative brain size has received little investigation."

A recent study by Pitnick and colleagues Kate Jones of the Institute of Zoology at the Zoological Society of London and Jerry Wilkinson of the Department of Biology at the University of Maryland was funded by the National Science Foundation and used comparative analysis to show that bat species that roost in larger social groups and those with promiscuous females have relatively smaller brains than species with females that are faithful to their mates. Male infidelity, by contrast, had no evolutionary impact on relative brain size.

According to Pitnick, a likely explanation for this relationship relates to the energetic demands of producing and maintaining both brain and sperm cells; males cannot afford a lot of both. Under this explanation, males with relatively large testes and small brains leave more offspring than larger-brained, less fertile, competitors.

"When females mate with more than one male, sperm compete to fertilize the female's eggs. Such 'sperm competition' is rife in many bat species, perhaps due in part to the unusual ability (among mammals at least) of sperm to survive inside the female's reproductive tract for a very long time," says Pitnick. "The male who ejaculates the greatest number of sperm may win at this game, and hence many bats have evolved outrageously big testes—as much as 8.5% of their body mass. Because they live on an energetic knife-edge, bats may not be able to evolutionarily afford both big testes and big brains. We're excited about these results, as they may stimulate more research into the correlated evolution of brains, behavior and the extravagant and costly ornaments and armaments favored by sexual selection."

The full results of Pitnick's study have recently been published in Proceedings B (London) a biology journal of the Royal Society, the United Kingdom's national academy of science.

Proceedings B of the Royal Society