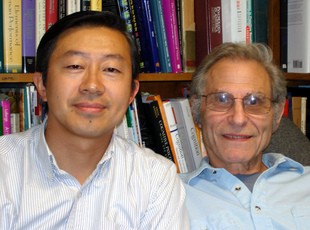 Yi-Yuan Tang of China's Dalian University of Technology, left, and Michael Posner of the University of Oregon are researching the mechanisms behind meditation and well being.

Newswise — A team of researchers from China and the University of Oregon have developed an approach for neuroscientists to study how meditation might provide improvements in a person's attention and response to stress.

The study, done in China, randomly assigned college undergraduate students to 40-person experimental or control groups. The experimental group received five days of meditation training using a technique called the integrative body-mind training (IBMT). The control group got five days of relaxation training. Before and after training both groups took tests involving attention and reaction to mental stress. The findings appear online this week ahead of publication by the Proceedings of the National Academy of Sciences.

"This study improves the prospect for examining brain mechanisms involved in the changes in attention and self-regulation that occur following meditation training," said co-author Michael I. Posner, professor emeritus of psychology at the University of Oregon. "The study took only five days, so it was possible to randomly assign the subjects and do a thorough before-and-after analysis of the training effects."

The IBMT approach was developed in the 1990s. Its effects have been studied in China since 1995. The technique avoids struggles to control thought, relying instead on a state of restful alertness, allowing for a high degree of body-mind awareness while receiving instructions from a coach, who provides breath-adjustment guidance and mental imagery while soothing music plays in the background. Thought control is achieved gradually through posture, relaxation, body-mind harmony and balanced breathing. The authors noted in the study that IBMT may be effective during short-term application because of its integrative use of these components.

IBMT has been found to improve emotional and cognitive performance, as well as social behavior, in people, said lead author Yi-Yuan Tang, a professor in the Institute of Neuroinformatics and Laboratory for Body and Mind at Dalian University of Technology in Dalian, China. Tang currently is a visiting scholar at the University of Oregon, where he is working with Posner on a new and larger study to be conducted in the United States.

The current study did not include direct measures of brain changes, although previous studies have suggested alterations have occurred in brain networks. Posner said the planned studies in the United States will include functional magnetic resonance imaging to examine any brain network changes induced by training.

In summary, the 11-member team wrote: "IBMT is an easy, effective way for improvement in self-regulation in cognition, emotion and social behavior. Our study is consistent with the idea that attention, affective processes and the quality of moment-to-moment awareness are flexible skills that can be trained."

At this point, the findings suggest a measurable benefit that people could achieve through body-mind meditation, especially involving an effective training regimen, but larger studies are needed to fully test the findings of this small, short-term study, Posner said.

The project was supported by the grants from the National Natural Science Foundation of China, Ministry of Education of China and the UO's Brain, Biology and Machine Initiative.

Co-authors with Tang and Posner were: Yinghua Ma, Junhong Wang, Yaxin Fan, Shigang Feng, Qilin Lu, Qingbao Yu and Danni Sui, all of the Institute of Neuroinformatics and Laboratory for Body and Mind at Dalian University of Technology, Ming Fan of the Institute of Basic Medical Sciences in Beijing, and Mary K. Rothbart, professor emerita of psychology at the University of Oregon. Tang also is affiliated with the Key Laboratory for Mental Health and Center for Social & Organizational Behavior, both located in the Chinese Academy of Sciences in Beijing.