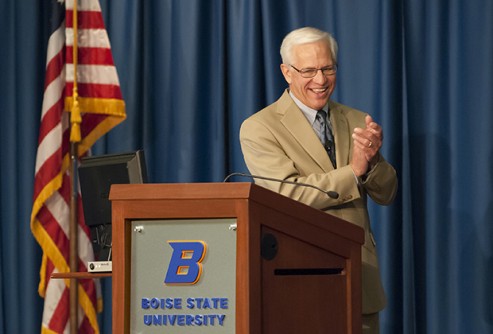 “Serving as president of Boise State University has been the privilege of a lifetime,” Kustra wrote in a letter to the Boise State family Wednesday morning. “I will be forever grateful for being able to serve during this period of incredible growth and accomplishment for the university.”

In his first speech to the campus community in 2003, Kustra challenged Boise State to strive to become the metropolitan research university of distinction that the fast-growing city of Boise and the increasingly technology-driven Idaho economy needed to thrive. Over the next decade and a half, Boise State achieved that goal, becoming Idaho’s largest graduate school and earning a doctoral research university designation from the Carnegie Classification of Institutions of Higher Education in 2016.

Through this sustained focus, the university has been Idaho’s fastest-growing research enterprise, securing more than $50 million in research grants and contracts this past year — more than twice as much as the year Kustra joined the university. Boise State achieved its goal of matching the national average for the percentage of graduates earning degrees in the “STEM” fields of science, technology, engineering and math. This fall, Boise State was one of just five universities in the country recognized by the Association of Public and Land-Grant Universities for innovative and effective ways to boost student retention and graduation rates.

Kustra was among the first and most vocal proponents in advocating for the creation of the College of Western Idaho. He shifted Boise State land, buildings and programs to jumpstart the effort when voters approved the community college.

At the same time, he launched a long-term, strategic vision for building the state-of-the-art laboratories, high-tech classrooms and student-centered facilities that would transform the Boise State campus and the student experience. The effort led to more than $450 million in construction, including academic facilities such as the Environmental Research Building, the Micron Business and Economics Building and the Norco Building, which houses nursing and health sciences. The university expanded the Student Union Building by 60 percent and developed new housing options, most notably the just-opened 650-bed Honors College and Sawtooth Hall.  In the same years, Boise State constructed new football, basketball and softball facilities and the Stueckle Sky Center.

Under Kustra, the university has embraced its role as an essential part of downtown Boise, moving its entire computer science program into one of the city’s newest buildings, just steps away from many of the software and high-tech firms that have partnered with Boise State to grow the quality and quantity of these in-demand graduates. A more than two-decade partnership with Micron Technology and its leaders and foundation remains strong and vital, and Kustra and the College of Engineering accepted the largest donation in university history, $25 million for the Micron Center for Materials Research, in 2015.

One of the top goals in the university’s strategic plan under Kustra has been to adjust university programs to meet the needs of its community, and the growth in research, academic and philanthropic partners has been significant. Nearly five times as many donors — over 25,000 last year — contribute to Boise State University today than when Kustra started in 2003. The university foundation’s assets have more than doubled to more than $180 million.

Kustra led the university’s first major campaign, Destination Distinction, which outraised its $175 million goal and became the most successful higher education fundraising effort in Idaho history when it ended in 2011. This year, Boise State announced it had more than doubled its goal and raised more than $50 million for student scholarships.

Boise State welcomed its largest first-year class in history for two years in a row, educates more students at all levels than ever before, and has set a university record for the number of graduates each academic year for nine straight years. Boise State educates one third of all students enrolled in Idaho’s entire public higher education system — including all community colleges and four-year universities, State Board of Education numbers show. The Honors College is now home to more than 900 top students from around Idaho and beyond.

More than 80 percent of Boise State students remain in Idaho to live, work and raise their families five years after they graduate. Perhaps even more telling, Boise State has become a top choice for students from around the West and elsewhere — and some 45 percent of these students remain in Idaho five years after they graduate, contributing to a significant “brain gain” that helps fuel one of the nation’s strongest economies.

Kustra recently interviewed his 500th guest on his Boise State Public Radio show, Reader’s Corner, which features conversations with leading writers, including many winners of top literary prizes and authors of bestsellers. His well-known love and appreciation of the written word helped shape the Campus Read, which connects all Boise State students and faculty around a single book or collection of readings each school year.

In his letter Wednesday, Kustra thanked the faculty, staff and state education leaders that helped make Boise State’s nearly unrivaled trajectory possible. He said he and his wife, Kathy, “a full partner in this venture,” wanted to thank the community for its warmth and support.

“Needless to say, Kathy and I will be Broncos for life,” he said.

Kustra parlayed Boise State’s famous and unexpected win over Oklahoma in the 2007 Fiesta Bowl into a launching pad for national recognition and a growing reputation as a leader in innovation and creativity, both in athletics and academics. He launched the School of Public Service to train the next generation of Idaho leaders and the College of Innovation and Design to reimagine how a public university should partner and collaborate with industry and others to best prepare students for longterm success.

In Kustra’s 15 years, Boise State started the Center for Teaching and Learning, which helps faculty implement new and emerging teaching techniques and technology; the Venture College, which engages hundreds of local business leaders to help train student entrepreneurs and launch their business and nonprofit ideas; and the Professors of the Practice program, which brings world-class business leaders, scientists and artists to Boise State at the peak of their careers to offer insight and instruction that connect classroom learning to real-world experience.

Kustra led a revitalization of the campus culture and a complete rebuilding of student support and success services. This fall, more that 2,800 students are living in university-owned campus housing — many in discipline-specific living and learning communities proven to boost success and engagement, which were initiated during the second year of Kustra’s presidency. A devotion to the student experience, campus life and safety has spurred more than 200 student organizations and a fraternity and sorority system focused on service and leadership that has grown from less than 100 at the start of Kustra’s tenure to more than 1,800 students in 21 organizations today.

Boise State’s innovative culture caught the attention of former President Barack Obama, the Chronicle of Higher Education and many others.  Silicon Valley companies such as Jelli cite the university’s role in shaping the city as a major reason they choose to move to or expand in Boise.

“Boise State has become the metropolitan research university of distinction we envisioned,” Kustra wrote Wednesday, “but this is a journey not a destination, with many more exciting opportunities and challenges for Boise State.”