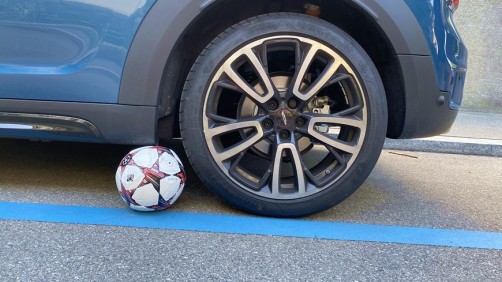 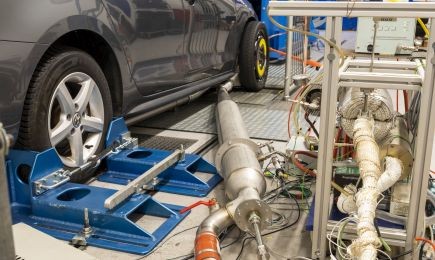 Research as close to real-life-conditions as possible.

Newswise — The VW Jetta Hybrid on the chassis dynamometer in Empa's Automotive Powertrains Technologies Laboratory had a couple of years of duty as a fleet vehicle. Strapped into the test chamber, it has been part of a new research purpose since July 2020: The goal is to generate brake dust, strictly following the standardized WLTP driving cycle, is the cycle that is also used to determine exhaust emissions.

The interest in brake dust measurements is fairly recent: In June 2016, a department of the UN Economic Commission for Europe (UNECE) known as the "Particle Measurement Programme Informal Working Group" (PMP IWG) decided that it was time to develop a generally applicable test procedure for brake dust that would reliably determine the mass and the number of the emitted particles. Since then, a number of research institutions, vehicle manufacturers and specialized companies for testing equipment have addressed the topic. However, there some severe challenges to tackle.

Thrown in all directions

Unlike an exhaust pipe, which reliably emits gases in a given direction, a rotating brake disc distributes the particles in all possible directions. So you first have to collect  the particles and then introduce them in a well-defined flow towards a particle analyzer. During this process losses have to be minimized: Neither fine particles should be escape, nor should coarse particles remain in the pipes.

Two further complications arise: The brakes of a vehicle  are attached to a rotating drive shaft, which must be carefully sealed for the measurement so that no particles are lost. In parallel a brakes have t be cooled. On the road, the airstream together with ventilation lamellas inside the brake disks provide a cooling breeze. A fully enclosed brake on a test bench, by contrast, can heat up quickly – and would then yield completely different particles than in real everyday traffic. Such an analysis would thus be of little value.

Measure all emissions at the same time

The UNECE's PMP IWG working group solves the problem by simplification: The desired brake tests are to be carried-out in completely enclosed test stands. Such test stands exist. They resemble large cabinets, in which brake discs and brake pads rub against each other. Only one component is tested, not the entire car.

"We are going to try out another way," says Panayotis Dimopoulos Eggenschwiler, who is designing the test setup at Empa. "We want to measure all emissions of a vehicle simultaneously during a test drive on the chassis dynamometer. This is much more meaningful than data from an isolated brake tester, which must then be converted to real-world conditions".

Together with Daniel Schreiber, an engineer by training, Dimopoulos Eggenschwiler has developed the Empa version of the test, the results of which must now stand up to comparison with other international research teams. At Empa an entire vehicle is being tested, the VW Jetta Hybrid mentioned above. The brake of the right front wheel was enclosed in a specially designed metal housing. A compressed air pipe conveys large quantities of cooling air into the metal casing from the front end of the car; at the same time the air serves as the transport medium for the emitted brake particles. These are directed into a tube about along the vehicle. After a short flight time they land in a 13-stage cascade impactor, a special instrument that sorts particles according to size. Subsequently, the particle fractions can be chemically analyzed by weight. If necessary, their morphology and composition can also be examined using an electron microscope, for instance.

"In preliminary tests, we have already determined what of consisting elements of the brake particles," says Dimopoulos Eggenschwiler. "It is mainly iron oxide, which originates from the brake disc, and a number of further oxides and species containing aluminum, magnesium, calcium, potassium and titanium, which stem from the brake pads." In addition to coarse, particles, there are also smaller particles that can be inhaled and can enter the lungs.

Now that the measuring process is running on a stable basis, the VW Jetta will initially be operated according to the legally prescribed WLTP cycle and will supply brake particles to the cascade impactor. Further test series are planed after that. "We want to find out, for example, whether hybrid vehicles brake differently compared to cars with conventional powertrain systems and hence result in different emissions," explains the project leader. Hybrid vehicles  are also capable of braking through their electric motor and, therefore, need to use their mechanical brakes much less frequently. On the other hand, hybrid vehicles have a higher mass. "With the results of our measurements, it will be possible to optimize the operating modes of future generation vehicles and keep brake dust emissions under better control than today".