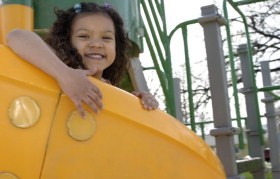 Opening up schoolyards after hours gives families more places to be active.

Newswise — Ohio lawmakers made it easier for schools to open their gymnasiums, pools, playgrounds, running track, athletic fields and other facilities to public use during non-school hours by passing legislation Wednesday that clarifies liability issues.

The “shared-use” bill, which becomes law 90 days after it’s signed by Gov. John R. Kasich, does not automatically open school facilities to the public. Advocates anticipate the bill will be signed soon. But it does alleviate what school administrators say was the biggest concern about expanding access.

“This bill will relieve some of that and ease the liability situation,” said State Representative Gerald Stebelton (R-Lancaster), the sponsor of Ohio House Bill 290. “There may still be some custodial expenses, but I think that this will be a good thing for school districts and give them greater comfort in opening their facilities.”

An American Heart Association policy statement published in the American Journal of Public Health last year recommended school districts and community organizations create shared-use agreements to allow supervised activities like sports leagues and unsupervised playing as a way to promote increased physical activity in children and young adults. Such agreements may be particularly important for low-income communities, which have less access to recreational spaces and community recreation centers, according to the statement.

The U.S. has an obesity epidemic, with nearly one in three children and teens overweight or obese, nearly triple the rate in 1963. Among adults, obesity rates have risen to 34 percent. Despite this, nearly 50 percent of adults and 65 percent of adolescents do not get the recommended amount of physical activity each day. Lack of physical activity plays an important role in community health.

Rep. Stebelton said the bill is an important step as communities look for tools to promote healthy lifestyles.

“The ability for schools to open up their doors to the community will help maximize community involvement and hopefully begin to support activities that lead to active living, reduce obesity, increase community safety and promote community support for public schools,” he said.

A coalition of more than 20 organizations, including the American Heart Association, the Safe Routes to Schools National Partnership and the Healthy Policy Institute of Ohio worked to garner support for the bill.

“Clarifying liability issues provides better guidance for administrators when making decisions to open their properties for public recreational use, so kids, families and residents can be active close to home, especially in undeserved communities with few areas to play and be active," she said.

Costs and liability concerns were the key barriers to creating shared-use agreements, according research by Mary Chace, an assistant professor and program director for the Public Health Education program at Wright State University in Dayton, Ohio.

“It’s one thing to informally have things open and it’s a whole other thing to truly open your doors to public use for physical activity,” Chace said. “We want to move toward a model where the community is welcomed to the gyms, weight rooms and track—even if there’s a fee. It’s a travesty to have these wonderful facilities in every community and have them locked up to the people who are paying for them.”

The campaign to garner support included groundwork to assist communities to establish shared-use agreements, an effort to hasten implementation, said Cresha Auck Foley, AHA’s Government Relations Director for Ohio. Resources developed during the campaign are already helping local conversations and even have been useful in other states working to clarify their own rules for the use of school owned recreational facilities by other government and non-government entities for use outside the school day.

“Liability fears shouldn’t be a barrier to helping children and families be active,” Auck Foley said.

Including Ohio, 30 states have already passed similar legislation to remove barriers to shared-use agreements or already had it on their books. The AHA is working on similar efforts in Iowa, West Virginia, Montana and Washington, D.C.

###Original news and feature stories from heart.org are available to the media for linking, quoting and excerpting. Copyright is owned or held by the American Heart Association and we reserve all rights, but you are granted permission, at no cost and without need for further request, to link to, quote or excerpt from these stories in any medium anywhere as long as you do not alter the text used and provide proper attribution to the American Heart Association. Full terms of use and attribution language can be found here.