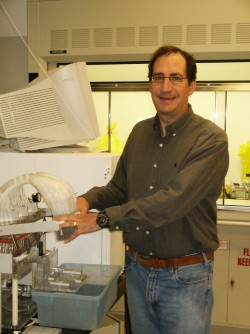 Roth is also professor in the departments of pharmacology, medicinal chemistry and natural products and he holds the Michael Hooker Chair of Protein Therapeutics and Translational Proteomics.

His work in pharmacology and drug discovery has earned him numerous patents and he has published nearly 300 articles in, among many other publications, Science, Nature, Cell and the New England Journal of Medicine. He has also trained dozens of doctoral and post-doctoral students who have also become leaders in their field.

Much of Roth’s research focuses on trying to understand how central nervous system drugs affect the brain’s neurons. The goal is to investigate existing treatments in order to find new treatments and mitigate side effects, particularly for such problems as schizophrenia, depression, bipolar disorder and eating disorders. “We really don’t understand how most drugs currently used in brain disorders work,” he explained. “If we can uncover how they exert their therapeutic actions, we hope to find drugs that are more effective. Additionally, if we can understand the side effects of current drugs, we’ll know what molecular targets we have to avoid in making new drugs so they don’t have the side effects.”

Essentially, the work identifies both good targets for drug development, and bad targets to be avoided. In one application of the technique, Roth’s lab identified potentially safe and effective compounds for treating obesity. Those compounds have been out-licensed to biotech companies for commercial development. And In one of his most important research projects, Dr. Roth and his team at UNC, along with scientists at the University of California, San Francisco, developed and validated a computer model that can allow researchers to predict likely side effects before a drug is even put into clinical testing. The method compares the structures of all known drugs for various disease targets to their naturally-occurring binding partners. That comparison has revealed interactions between drugs and their targets that could not be predicted simply by studying their chemical structures.

A native of Butte, Montana, Roth graduated from Carroll College in Helena in 1977 with a degree in biology and chemistry. He subsequently earned his combined MD/PhD in Biochemistry in 1983 from St. Louis University School of Medicine. He completed an internship in psychiatry at the National Naval Medical Center in Bethesda, Md. in 1984, and from 1983-1986 worked at the National Institute of Mental Health. During much of that period, he also worked at the Naval Medical Research Institute in Bethesda, first as a principal investigator and later as assistant division head of the institute’s surgical research division. In 1991 Dr. Roth concluded his residency in psychiatry at Stanford University Medical School, where he was also a Dana Foundation Fellow in Neurosciences in the Nancy Pritzker Laboratory of Molecular and Developmental Neurobiology. That year, he also received his first PhRMA Foundation grant. After completing his studies at Stanford he held appointments at Case Western Reserve University School of Medicine for more than a decade in Departments of Psychiatry, and Biochemistry, ultimately becoming a Full Professor of Biochemistry in 2003. During much of that time he was on the faculty of Case Western Reserve University, where he specialized in the treatment of schizophrenia and, for a time, directed the Schizophrenia Research Ward at University Hospitals of Cleveland. The annual Award in Excellence honors researchers who received PhRMA Foundation grants early in their careers and then distinguished themselves through outstanding scientific and/or academic achievements. “This award is wonderful for me and for my lab. Essentially, the PhRMA Foundation makes a bet on young investigators, and no one knows for years whether it was a good bet or not. I am happy I was able to find success and, hopefully, will continue to find it for many years.”

The Award in Excellence will be presented April 9 at a meeting of the American Society for Pharmacology and Experimental Therapeutics.