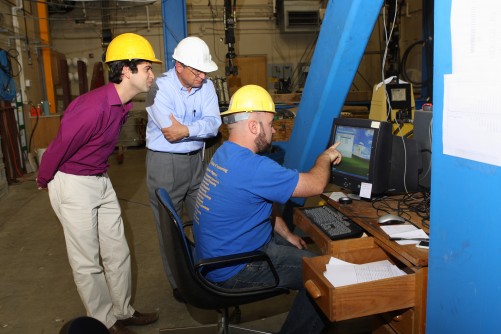 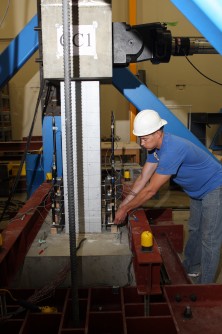 Graduate student Todd Pauly adjusts the instrumentation on the column as part of testing to determine whether self-consolidating concrete columns can be used in areas where earthquakes occur.

Newswise — It all comes down to bridging a gap. The J. Lohr Structures Laboratory helps companies develop new materials and products—self-consolidating concrete columns and pre-stress concrete bridge girders-- that bridge a physical gap. Many of those newly developed products are used in public works projects funded by federal, state and local governments, thus bridging a commercial gap.

The lab is the only facility of its kind in South Dakota, according to Nadim Wehbe, head of the South Dakota State University Civil and Environmental Engineering Department. Wehbe, who coordinated the lab’s development, has been recognized as a leader in the field, recently being named a fellow of both the Structural Engineering Institute and the American Concrete Institute.

Over the last decade, researchers have conducted structural testing on large- and full-scale test specimens for private companies and government entities. As one of eight universities in the Mountain-Plains Consortium Transportation Center Program, SDSU civil engineering faculty and graduate students work on solutions to transportation-related problems and evaluate structures that may be more cost-effective and durable. Testing composite structuresThe Vulcraft/Verco Group of Norfolk, Neb., a division of Nucor Corporation, has used the lab to research a wide range of steel joists, steel decks and cold-formed wall assemblies.

For a Nucor-funded project in fall 2008, structures lab graduate students and staff built cold-formed steel walls and a 20-foot steel joist floor, tested the structure and demolished it, all within a week, explained lab manager Zachary Gutzmer. This process was repeated for seven floor-and-wall setups.

The project’s goal was to determine how the type and placement of joists affected wall loading. The floor was loaded using an actuator, and strain gauges collected data on wall stress and its effect on building components. Since then, Nucor has sponsored four research projects investigating various facets of concrete/cold-formed steel composite building components. “Having a structures lab close by allows our engineers to view more of the testing and reduces our transportation costs,” explained Dave Samuelson, structural research engineer for new products and market development at Vulcraft/Verco Group.

“Nucor’s research partnership with SDSU during the past five years has allowed us to develop a greater understanding of the behavior of our new composite floor system,” Samuelson said. “Our partnership with SDSU has been a win-win situation.” Evaluating bridge materialsResearch at the structure lab also helps South Dakota companies develop transportation products, such as bridge girders, that are then used for public works projects. In 2006, the lab evaluated the performance of six 40-foot prestressed concrete bridge girders, each weighing 18 tons. The research project was funded by the South Dakota Department of Transportation and the U.S. Department of Transportation through the Mountain Plains-Consortium and investigated the performance of self-consolidating concrete. Two precast concrete producers, Gage Brothers of Sioux Falls and Cretex of Rapid City, donated the girders made of coarse aggregates from their respective areas of the state.

Self-consolidating concrete, also known as self-leveling or self-compacting, does not require the use of a mechanical vibrator to distribute the concrete evenly. Tests showed that the self-consolidating girders performed equal to or better than conventional concrete girders, according to Wehbe. This research enabled the two companies to produce a new product which they could then sell to construct bridges on the state’s highways. “We can combine both public and private interests into one project by engaging industry with vested interest in the research being done.” Wehbe said. Collin Moriarty, engineering manager at Gage Brothers, says this coordinated effort provides local governments with better, more cost-effective structures. Withstanding earthquakes, crashesFor a 2013 Mountain-Plains Consortium project, graduate student Todd Pauly determined that bridge columns made of self-consolidating concrete can be used in regions which experience earthquakes.

Last fall, graduate student Brett Tigges began evaluating the effectiveness of a concrete wall poured between two bridge columns in preventing bridge failure that might occur if a semi-truck crashed at high speed into the bridge column.

“This lab is a tremendous resource for hands-on research,” said Wehbe. Through its collaboration with private and public entities, the work done at the structures lab will continue to improve the quality of buildings and bridges.

About the J. Lohr Structures LabEstablished in 2004, J. Lohr Structures Lab the facility has a 34-foot high bay space that is 90 feet long and 39 feet wide with a 4-foot thick reinforced concrete floor to accommodate large- and full-scale test specimens. The lab does research for private companies and government entities and is one of eight universities in the Mountain-Plains Consortium Transportation Center Program. For more information, contact lab manager Zachary Gutzmer at [email protected] or call (605) 688-4999 or the SDSU Civil and Environmental Engineering Department at (605) 688-5427. 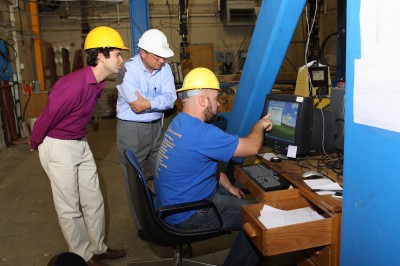 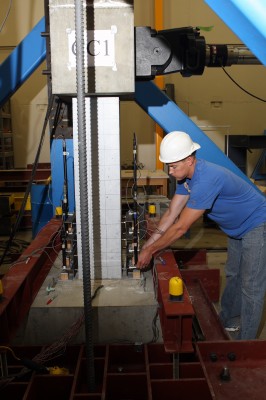 Caption: Graduate student Todd Pauly adjusts the instrumentation on the column as part of testing to determine whether self-consolidating concrete columns can be used in areas where earthquakes occur.