When the earth shakes, there’s a chance the walls will come tumbling down. CSU engineering faculty are working to make sure California's structures can withstand the quaking. 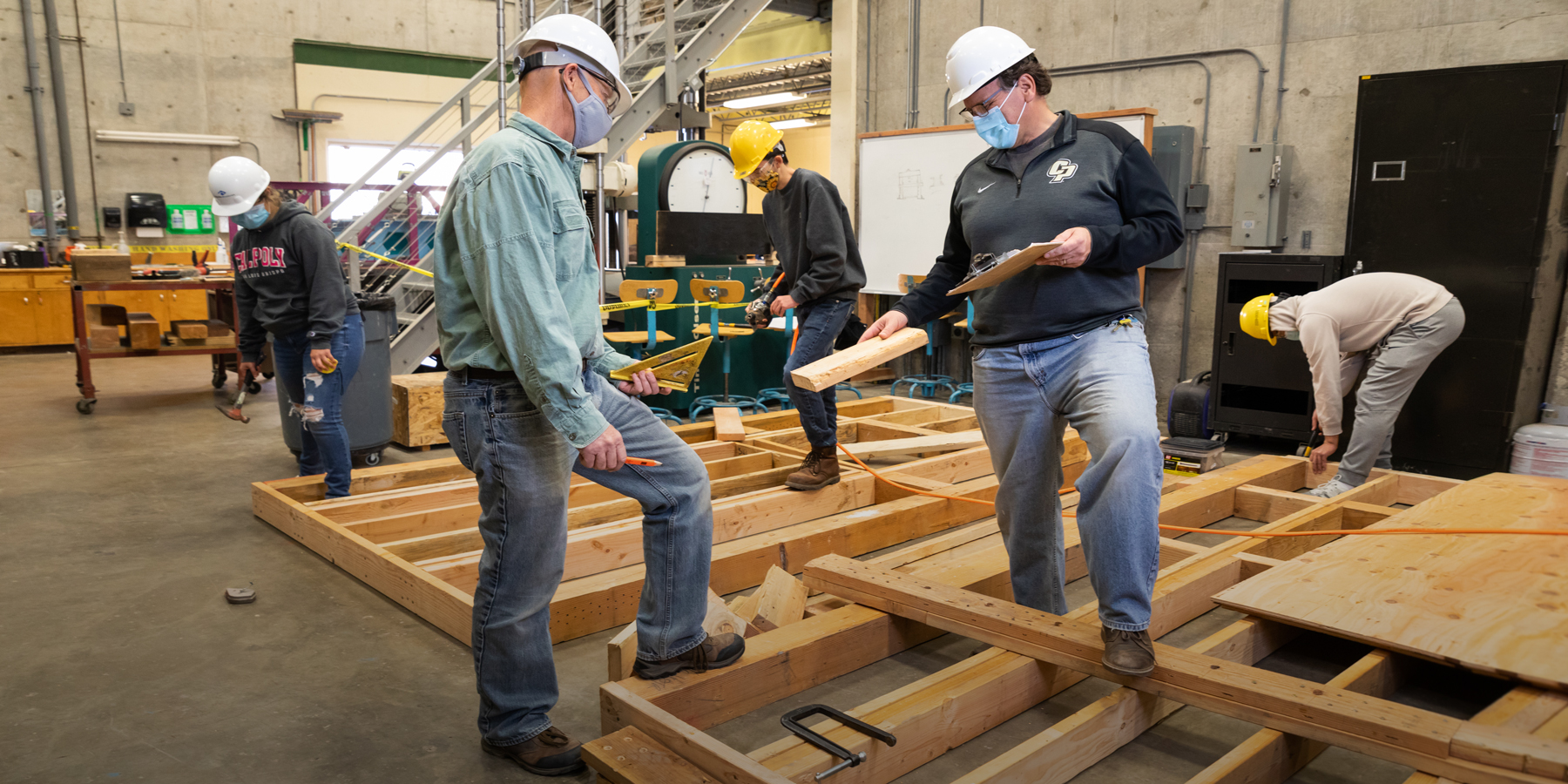 Because California suffers the most damage caused by earthquakes​ in the U.S., CSU structural and architectural engineering programs, like that at Cal Poly San Luis Obispo, are particularly focused on studying structural damage caused ​by earthquakes, analyzing how structures of different materials will react during an earthquake to update building codes and making sure seismic study is a significant piece of in-class learning.

Newswise — Seismic building codes might not be at the top of your reading list, but they are highly responsible for saving lives during earthquakes. Largely set by the International Code Council, these regulations lay out how to best design, construct, alter and maintain buildings to survive a shaking event.

But they are subject to change as new research emerges.​

“Codes are a living document,” says Anahid Behrouzi, Ph.D., an architectural engineering faculty member at California Polytechnic State University, San Luis Obispo. “They're only as good as the knowledge we have now, and that knowledge changes based on new large-scale experiments or computer simulations we conduct. It changes based on our observations from major earthquakes."

"When communities in Chile, Mexico and New Zealand recently had earthquakes, we learned more about building vulnerabilities, and then we were responsive to them in our research programs," she continues. "What comes of that is​ new knowledge that means we need to update the codes. You don't keep your benchmark the same as in the 1980s. You need to keep moving that forward.”

Because California suffers the most damage caused by earthquakes​ in the U.S., CSU structural and architectural engineering programs, like that at Cal Poly San Luis Obispo, are particularly focused on studying structural damage caused ​by earthquakes, analyzing how structures of different materials will react during an earthquake to update building codes and making sure seismic study is a significant piece of in-class learning.

“Our objective is to deal with the challenges we're faced with in our community, and it's core to our curriculum,” Dr. Behrouzi says. “We have this trifecta of computer simulation, large-scale experimental testing and practitioners that come together in the right space, in a place where we really care about earthquakes.”

To provide data needed for earthquake research, many engineers head out on reconnaissance trips after one strikes a city to document the structural damage inflicted. Following the September 2017 7.1-magnitude earthquake in Mexico City, for example, Behrouzi sent undergraduate student Rachel Chandler with an alumnus from Degenkolb Engineers to the metropolis with funding from a National Science Foundation rapid grant. The reconnaissance team took photos of and logged the damage and collected data on the buildings impacted, such as their story heights, ages and construction materials, to create a database.

In addition, Behrouzi sent graduate student Lauren Benstead with an alumnus from Wiss, Janney, Elstner Associates, Inc. to outfit a number of the city’s buildings with accelerometers that measure the structures’ ambient vibration—data that can be used to develop computer models of the event.

“Those missions spawned a multitude of research, because of all the collected data,” Behrouzi says. “We ended up with information from over 118 buildings … [gathered by] that first team who went out to do reconnaissance. And then from the people who were deployed to do instrumentation with the accelerometers, around 20 buildings. It ended up proving to be fruitful work for other undergraduate students of mine for the next year and a half.”

With that information, her students mapped the damage using the geographic mapping tool ArcGIS. They then correlated it with other factors like data from the local ground motion stations, the building characteristics and the structures’ location within the region’s basin—important to know, since the soil the building sits on can affect the way it reacts to earthquakes.

Another major part of understanding how structures react to earthquakes is developing computer models and conducting physical lab experiments, both of which emulate the forces that walls might experience during an earthquake.

Currently, Cal Poly San Luis Obispo is carrying out its lab tests with an older actuator, which is a large machine that applies simulated gravity and earthquake forces. However, thanks to a National Science Foundation grant, the university is acquiring two new actuators that use automated computer-operated systems and allow for higher force loads to be applied.

“It's going to be a lot more accurate because now we can actually set what is ca​lled a testing protocol, [because] the results you get aren't considered to be legitimate unless you have a certain rate of load that's applied in each direction at certain intervals,” says John Lawson, architectural engineering professor.

While Behrouzi switched most of her work to computer modeling during the COVID-19 pandemic, her lab work generally focuses on testing reinforced concrete structures and understanding their performance during seismic events. In collaboration with fellow architectural engineering professor Peter Laursen, Ph.D., she’s been testing concrete walls with little interior vertical r​​einforcement that are consistent with those built before the 1980s and found across California.

“Mandatory retrofit programs have motivated property owners to conduct seismic evaluations of existing structures,” she explains. “There is a timeline in Los Angeles County, for example, to hire engineer​s to review older concrete buildings and determine if a retrofit is needed. In our research, we're investigating: What is the baseline performance of these pre-1980s walls? People assume they're going to have very poor behavior. What we're seeing in the laboratory helps us understand the difference between these assumptions and their actual physical behavior.”

So far, the team has tested this wall type with the campus's current older actuator—but will perform further tests with the new equipment​​. They’ll also test some proposed retrofit designs with guidance from industry advisors.

For Cal Poly San Luis Obispo architectural engineering professor Michael Deigert—who is also a structural engineer, contractor and steel fabricator—a main goal is providing students with hands-on experience designing, building and testing structures. One way he does that is by having classes construct different types of steel frames—measuring about 12 feet tall by 15 feet long—to understand how the design functions to keep buildings standing.

“We've done a variety of different things along the way to get the students involved and to educate them, so they understand what they're designing as part of their class project,” Deigert says. “They designed a three-story building that has structural steel frames and moment frames. The students complete their designs by doing calculations, drawings and details. In our class, they now get to fabricate, build and test the frames as well. This provides the students with a complete understanding of the frames’ expected performance during an earthquake and what it ta​kes for it to all come together.”

As the school awaits the new actuators, Deigert has already received industry requests to test various proprietary connections, which could lead to improving the performance of structural steel frames during earthquakes.

Stiff walls are defined as ones that move half as much as the roof diaphragm deforms during an earthquake, and studying the walls’ stiffness helps engineers understand how they will respond to ground motion.

Deigert and Lawson have teamed up to research the stiffness of plywood walls—especially as engineers have been working to design taller wood buildings—and develop “a methodology that's more accurate in determining the stiffness of these walls, which basically goes back to how do we design buildings safer for earthquakes,” Deigert explains.

The experimentation process to update the methodology, however, is incremental, and the two professors have involved students in various segments of the work. One area is conducting computer analysis on the building designs.

“You can actually take a simulated building and model it inside the computer, shake it with an earthquake and see if it's going to collapse before the earthquake ever happens,” Lawson says. “That's the beauty of our profession, saving lives before we even build the building by modeling it. And that is what we want our students to understand: Let's not necessarily always rely on trial and error [after a bad earthquake] … Let's try to be more progressive and try to predict ahead of time.”

But the research also requires testing in the lab, often with student help. In fall 2020, their two classes each modeled a different design for a three-story wood building, then built and tested the performance of a full-scale ​wall from the building using the current actuator. While the students got a hands-on learning experience, Deigert and Lawson collected more data for their long-term research.

“We're designing further experiments to take a look at other contributing factors by using what they have found as a guide,” Lawson says. “Then we’re making changes and adjustments in the classroom so we can get a hint at where we want to further our more resea​rch-dominated efforts in regard to changing these equations.”

Some of Lawson’s research on how to determine the loads or forces low-r​ise, big-box buildings with stiff walls and flexible roofs—like a Costco building or a warehouse—will see during earthquakes is already being incorporated into the next release of the building code in 2022. “The code thinks the walls and the columns are going to drift and sway much more than the roof deforms, and the code models the roof as being this rigid plate that is simply moving along with the columns,” he says. “In reality, with these other types of buildings, it's the other way around.”