Burrowing Mammals Dig for a Living, but How Do They Do That? 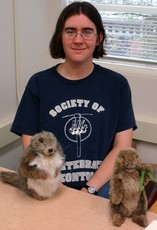 Samantha Hopkins, a geologist and paleontologist at the University of Oregon, is shown in her office with stuffed animal friends. She studies the art of burrowing by mammals around the world.

Newswise — Next time you see a mole digging in tree-root-filled soil in search of supper, take a moment to ponder the mammal's humerus bones. When seen in the lab, they are nothing like the long upper arm bones of any other mammal, says Samantha Hopkins, a paleontologist at the University of Oregon.

Hopkins, a professor of geology in the UO's Robert D. Clark Honors College, studies the evolutionary history of burrowers, in search of why and how they adapted a physique for digging in response to environmental influences or other forced changes in habitats.

In a talk Sunday, Oct. 28, at the annual meeting of the Geological Society of America, Hopkins presented preliminary findings of one line of her research. Moles and mole rats, she said, are examples of mammals that have adapted to moving soil in rocky, root-packed soils, in opposition to most other burrowing mammals that prefer softer, dryer sandy soils.

"It requires a lot of morphological adaptation, a lot of tradeoffs, to be good at digging," she said. "That's intuitive to us as humans who have handled a shovel in the backyard. We know that it's really hard work to shift soil. Burrowing mammals acquire a complex of features that lets them handle whole days moving soil. They make for a great case for understanding convergent evolution because in spite of how difficult it is to do this -- in spite of all the costs of doing this -- it seems to be worthwhile enough that many mammals have done it through time."

Convergent evolution is the development of similar characteristics, necessary for survival, among unrelated organisms in the same environmental conditions. Hopkins studies living burrowers as well as the fossil records of such mammals, living and extinct worldwide, to understand why some choose to live -- and dig for their food and to avoid predators -- in harsher regions. Conventional thinking, she said, is that mammals evolved into burrowers after being driven into grassland habitats, where going into the soil is their only option to eat or escape in the absence of trees.

"There is, however, some evidence that the morphology and behavior required to dig in more compact or rocky soils is recognizably different from that used in softer soils," she said. "This study (still ongoing) aims to determine whether there is an influence of digging substrate on the evolution of digging."

Fossils found in the field or in museum collections allow Hopkins to examine and compare the structure of burrowing mammals' shoulders, skulls, legs, feet and claws to get clues of what features developed and possibly at what points in time these skeletal changes occurred.

In her talk, Hopkins briefly described known methods of burrowing, including scratch, head-lift, incisor and humeral rotation. Humans digging something out of sand with their hands is an example of scratch digging. The other methods are difficult or impossible for humans to even mimic, she said.

As a doctoral student at the University of California, Berkeley, Hopkins studied the fossil record of the extinct burrowing mammal Ceratogaulus, the only horned member of the digging group Mylagaulidae. The gopher-like rodents used the head-lift technique, in which they use the tips of their snouts, powered by enlarged neck muscles, to drive into soil. As part of her dissertation, she showed in the Proceedings of the Royal Society B in 2005 that the horns were used for defense against predators -- not to help with the digging as had been previously theorized.

Mylagaulids were once common in much of North America some 20 million years ago. Existing head-lift diggers include marsupial moles, blind mole rats and mole voles. More common land-dwelling burrowers, which use a variety of techniques, are badgers, ground squirrels, burrowing owls, aardvarks, nutria, kangaroo rats, shrews, prairie dogs and armadillos.