Can Ghosts Cause Bad Air? 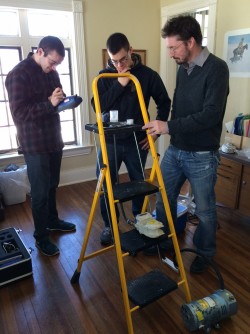 Newswise — A team of Clarkson University researchers is studying the possible links between reported hauntings and indoor air quality.

Associate Professor of Civil & Environmental Engineering Shane Rogers said human experiences reported in many hauntings are similar to mental or neurological symptoms reported by some individuals exposed to toxic molds. It is known that some fungi, such as rye ergot fungus, may cause severe psychosis in humans.

The links between exposure to toxic indoor molds and psychological effects in people are not well established, however, Rogers said. Notably, many hauntings are associated with structures that are prime environments to harbor molds or other indoor air quality problems.

"Hauntings are very widely reported phenomena that are not well-researched," he said. "They are often reported in older-built structures that may also suffer poor air quality. Similarly, some people have reported depression, anxiety and other effects from exposure to biological pollutants in indoor air. We are trying to determine whether some reported hauntings may be linked to specific pollutants found in indoor air."

Rogers is working with a group of undergraduate students to measure air quality in several reportedly haunted places around northern New York state. The team will gather data at several locations throughout the spring and summer and will publish their results at the end of the study.

By comparing these samples to samples from places with no reported hauntings, the researchers hope to identify factors unique to the haunted locations. They are looking for commonalities in the mold microbiome in the places believed to be haunted compared to the controls, as well as analyzing the types of toxic molds that may cause psychological effects in humans.

As a longtime fan of ghost stories, Rogers said his goal is not to debunk the legends but to instead provide insight on why certain places are perceived to be haunted.

"What I do hope is that we can provide some real clues as to what may lead to some of these phenomena and possibly help people in the process," he said.