Can Going to Work Make You Fat? 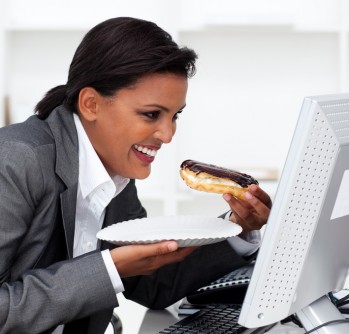 Employees may be happy to accept a treat at work, but these sugary treats wreak havoc with our bodies, spiking insulin levels and making fat burning impossible say authors of new diet book.

Newswise — A recent article by Sue Shellenbarger, The Battle of the Office Candy Jar (April 12, 2011, Wall Street Journal) raises a serious question: Although office snacks might boost morale are they also sabotaging your health? The conclusion: Based on increases in sick days, apparently the answer is yes.

It has been shown that just the sight or smell of candy, cookies, donuts and other sugary sweet concoctions triggers a desire to eat some. Since most of us are lugging around excess body-fat, this kind of morale booster is not helping our diet efforts and may inadvertently contribute to increasing sick days and perhaps anxiety, listlessness or moodiness when the resulting sugar rush wears off.

People often think they can work off these snacks with a little extra exercise or activity. However, the article accurately points out that just 2 pieces of candy each workday totals about 480 calories and explains that a person weighing 160 pounds would need to walk 157 minutes; ballroom dance 132; golf (carrying clubs) 88 minutes; backpack 56 minutes; or run fast for 29 minutes just to burn off those extra calories. Warning: You don’t even want to know the amount of exercise it would take to burn off most donuts and cookies! In addition, these sugary treats wreak havoc with our bodies, spiking insulin levels and making fat burning impossible.

“We’ve all been conditioned to view sugary foods as ‘treats’ when maybe we need to view them as drugs,” say co-authors Dian Griesel, Ph.D. and Tom Griesel of TurboCharged: Accelerate Your Fat Burning Metabolism, Get Lean Fast and Leave Diet and Exercise Rules in the Dust (BSH, 2011).

Their reasoning has a strong foundation. Sugar is after all another white crystalline powder. It was originally smuggled in from the Far East and was sold at the equivalent of $12,000 per pound. Its early users soon became addicted. Gradually its use spread throughout the population. At first it was a luxury for the rich, but gradually it was produced in large quantities at cheaper prices so that anyone could afford it. The health of all its users deteriorated rapidly. Not only did they suffer physically from the use of this drug, but their mental and emotional states were disturbed. They became irritable, sickly, obese and borderline schizophrenic. The white powder was not cocaine or heroin—it was and is sugar.

Tom Griesel points out, “Today the average American eats his or her weight in sugar every year. The typical person eats 50 teaspoons of sugar EVERY day—most of it hidden in processed and packaged foods. We believe more health problems can be traced to sugar use than any other single item eaten today.”

“Sugar is a totally useless, destructive, addictive drug that is responsible for many debilitating diseases like obesity, heart disease, hypoglycemia, diabetes, and tooth decay to name a few,” says Dian Griesel.

Why is its use tolerated? We show little sympathy for pushers of cocaine, heroin or amphetamines and other white powder drugs. Why then are food manufacturers allowed to dose their products with a sweet white poison that kills more people than all the illegal drugs combined?

The Griesels explain: “Sugar is a cheap additive and food filler. As prices of raw materials have increased, manufacturers of convenience and packaged foods add more and more sugar, including significant quantities of very unhealthy high fructose corn syrup. As consumers, we must realize that sugar by any name is a convenient an inexpensive extender for manufacturing convenience—BUT its consumption is detrimental to our long term health and well being.”

Do everyone in your office a favor: Discourage unhealthy office snacking and start bringing fresh fruits for the office snack bowl. Encourage your co-workers to do the same. Another great idea? Start an office pool for a biggest loser contest. Winning money and some healthy competition are always great motivators. You will all feel and look better along with being healthier as a result.

For more information about the book and authors Dian and Tom Griesel, please visit: www.turbocharged.us.com