“The most important book I’ve ever written,” says Grisham 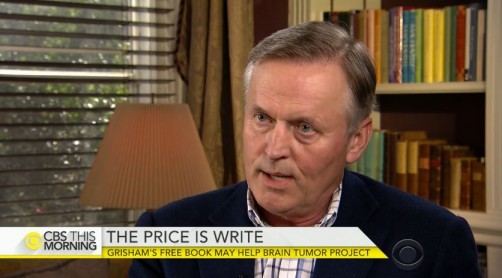 John Grisham on CBS This Morning

Newswise — Charlottesville, VA, – April 20, 2016 – Bestselling author John Grisham was featured on CBS This Morning today discussing his free book called The Tumor, a fictional account of how a real medical technology could impact the future of medicine. The short book is about focused ultrasound, a revolutionary non-invasive therapy with the potential to transform the treatment of a variety of serious medical disorders. The Tumor e-book is available for free on Amazon, Barnes & Noble and Google Play, and hard copies can be ordered at thetumor.org.

Grisham spoke with correspondent Chip Reid about why he became involved in focused ultrasound and the importance of the book. “The Tumor is the only book I’ve written that has a potential of advancing a technology that will have a profound impact on the lives of millions of people,” said Grisham.

Reid also spoke with Dr. Neal Kassell, chairman of the Focused Ultrasound Foundation, who explained the important role that Grisham is playing in educating the public. “One of the key impediments to the development and adoption of the technology is lack of awareness. It turns out that we have a celebrity on our board who has got a brand, can tell a story and has a following,” said Dr. Kassell.

Grisham has been a board member and steadfast supporter of the Focused Ultrasound Foundation for years. He wrote The Tumor to raise awareness and funds to help the Foundation accelerate the progress for the technology to improve the lives of patients with serious medical disorders. While the book is free, he encourages the public to support the Foundation’s programs for research, education and advocacy.

The Tumor has been very well received by the public. In just a few months, more than 350,000 books have been distributed. One reader posted the following review on Amazon – “All of Grisham's books are thrilling, but this one in particular is gripping, but for other reasons. The science is fascinating and seems like it's ahead of its time, but it's not! It's exciting to think that things like this are on the horizon. For those who are cursed with such an illness, this brings hope and promise.”

About The Tumor The Tumor follows the experience of the fictional patient Paul, an otherwise healthy 35-year-old father who is diagnosed with a malignant brain tumor. Despite receiving current state-of-the-art treatment of invasive brain surgery, radiation and chemotherapy, he passes away nine months after his diagnosis.

Grisham then takes readers to an alternate future, where Paul is diagnosed with the same brain tumor at 35 years old in the year 2025. In this future, doctors utilize focused beams of ultrasound energy to destroy Paul’s tumor without cutting into his skull. They then refocus the ultrasound to the surrounding brain to activate nanoparticles that deliver high concentrations of chemotherapy to the brain while minimizing systemic side effects. Paul is able to go back to his busy life after these procedures. The tumor returns a couple of times, and he is retreated with the same approach. While the tumor will eventually take Paul’s life, focused ultrasound therapy could transform a fatal condition into one that is chronic, but manageable.

More information about the book can be found at thetumor.org.

About Focused Ultrasound and the FoundationFocused ultrasound uses ultrasonic energy guided by real-time imaging to treat tissue deep in the body without incisions or radiation. Multiple intersecting beams of ultrasound are directed and concentrated on a target, much like a magnifying glass can focus multiple beams of light on a single point. Where each individual beam passes through the tissue, there is no effect. But, at the focal point, the convergence of the beams of focused ultrasound energy results in many important biological effects depending on the nature of the tissue and the ultrasound parameters.

Today, focused ultrasound is approved in the United States to treat uterine fibroids, reduce pain from bone metastases and treat the prostate. Different systems are approved to treat 16 diseases in regions around the world. The technology is in various stages of research and development for more than 50 diseases, including Parkinson’s, Alzheimer’s, hypertension and tumors of the brain, liver, breast and pancreas.

The Focused Ultrasound Foundation is a non-profit research, education and advocacy organization founded to accelerate the development and adoption of focused ultrasound to improve the lives of countless individuals with serious medical disorders. Learn more at www.fusfoundation.org.