This visualization, which uses scientific data, begins by illustrating the location of the Hickson Compact Group 40 in the constellation Hydra. It then zooms into a lonely patch of sky inhabited by the close-knit group's five galaxies. Finally, it shows a fly-through of this eclectic bunch — which includes three spiral-shaped galaxies, an elliptical galaxy and a lenticular (lens-like) galaxy — and how they are situated in relation to each other. 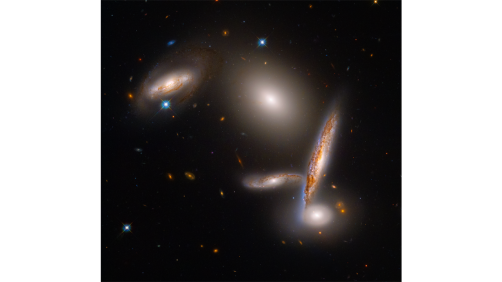 This menagerie includes three spiral-shaped galaxies, an elliptical galaxy, and a lenticular (lens-like) galaxy. Somehow, these different galaxies crossed paths in their evolution to create an exceptionally crowded and eclectic galaxy sampler.

Caught in a leisurely gravitational dance, the whole group is so crowded that it could fit within a region of space that is less than twice the diameter of our Milky Way's stellar disk.

Though such cozy galaxy groupings can be found in the heart of huge galaxy clusters, these galaxies are notably isolated in their own small patch of the universe, in the direction of the constellation Hydra.

One possible explanation is that there's a lot of dark matter (an unknown and invisible form of matter) associated with these galaxies. If they come close together, then the dark matter can form a big cloud within which the galaxies are orbiting. As the galaxies plow through the dark matter they feel a resistive force due to its gravitational effects. This slows their motion and makes the galaxies lose energy, so they fall together.

Therefore, this snapshot catches the galaxies at a very special moment in their lifetimes. In about 1 billion years they will eventually collide and merge to form a giant elliptical galaxy.

Astronomers have studied this compact galaxy group not only in visible light, but also in radio, infrared, and X-ray wavelengths. Almost all of them have a compact radio source in their cores, which could be evidence for the presence of supermassive black holes. X-ray observations show that the galaxies have been gravitationally interacting due to the presence of a lot of hot gas among the galaxies. Infrared observations reveal clues to the rate of new star formation.

Though over 100 such compact galaxy groups have been cataloged in sky surveys going back several decades, Hickson Compact Group 40 is one of the most densely packed. Observations suggest that such tight groups may have been more abundant in the early universe and provided fuel for powering black holes, known as quasars, whose light from superheated infalling material blazed across space. Studying the details of galaxies in nearby groups like this help astronomers sort out when and where galaxies assembled themselves, and what they are assembled from.

"I remember seeing this on a sky survey and saying, 'wow look at that!'" said Paul Hickson of the University of British Columbia, Vancouver, Canada. "All that I was using at the time was a big plastic ruler and a magnifying glass while looking over sky survey prints." He re-discovered the group by browsing through a collection of peculiar galaxies first published by Halton Arp in 1966.

Hubble was deployed into orbit around Earth by NASA astronauts aboard the space shuttle Discovery, on April 25, 1990. The telescope has taken 1.5 million observations of approximately 50,000 celestial targets to date. This treasure trove of knowledge about the universe is stored for public access in the Mikulski Archive for Space Telescopes, at the Space Telescope Science Institute in Baltimore, Maryland.

Hubble's unique capabilities in observing visible and ultraviolet light are a critical scientific complement to the infrared-light observations of the recently launched Webb Space Telescope, which will begin science observations this summer.

For images, video, and more information about the Hickson Compact Galaxy Group 40 and Hubble, visit: