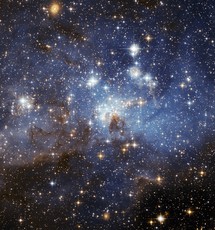 This image of star-formation region LH 95 was taken in March 2006 with Hubble's Advanced Camera for Surveys.

Newswise — Swirls of gas and dust reside in this ethereal-looking region of star formation imaged by NASA's Hubble Space Telescope. This majestic view, located in the Large Magellanic Cloud (LMC), reveals a region where low-mass, infant stars and their much more massive stellar neighbors reside. A shroud of blue haze gently lingers amid the stars.

Known as LH 95, this is just one of the hundreds of star-forming systems, called associations, located in the LMC some 160,000 light-years distant. Earlier ground-based observations of such systems had only allowed astronomers to study the bright blue giant stars present in these regions. With Hubble's resolution, the low-mass stars can now be analyzed, which will allow for a more accurate calculation of their ages and masses.

This detailed view of the star-forming association LH 95 was taken with Hubble's Advanced Camera for Surveys and provides an extraordinarily rich sample of newly formed low-mass stars. The LMC is a galaxy with relatively small amounts of elements heavier than hydrogen, giving astronomers an insight into star formation in environments different than our Milky Way.

The largest stars within LH 95 - those with at least three times the mass of the Sun - generate strong stellar winds and high levels of ultraviolet radiation that heat the surrounding interstellar gas. The result is a bluish nebula of glowing hydrogen that continues to expand out into the molecular cloud that originally collapsed to form these massive stars.

Some dense parts of this star-forming region are intact despite the stellar winds, and can still be seen as dark dusty filaments in the picture. Such dust lanes absorb parts of the blue light from the stars behind them, making them appear redder. Other parts of the molecular cloud have already contracted to turn into glowing groups of infant stars, the fainter of which have a high tendency to cluster. This deep Hubble image also reveals several large spiral and distant galaxies decorating the background of LH 95. This image of LH 95 is a composite of two filters that localize visible (V) and infrared (I) light. Because of the color assignments chosen, doubly ionized hydrogen, which is visible within the V filter, appears bluish. The choice of color assignment helps to distinguish hot bright blue stars from cooler, less luminous red stars. Credit: NASA, ESA, and the Hubble Heritage Team (STScI/AURA)-ESA/Hubble Collaboration Acknowledgment: D. Gouliermis (Max Planck Institute for Astronomy, Heidelberg) Images and additional information about LH 95 are available on the Web at: http://hubblesite.org/news/2006/55 http://heritage.stsci.edu/2006/55