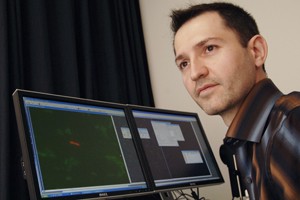 Dr. Gürol Süel, assistant professor of pharmacology, was among the investigators who discovered that biochemical "noise" is beneficial, helping cells transform from one state to another. His research suggests that rather than being bad for biology, cellular noise might have an important function, such as prompting stem cells to transform into a specific tissue type.

Newswise — Electrical noise, like the crackle heard on AM radio when lightning strikes nearby, is a nuisance that wreaks havoc on electronic devices. But within cells, a similar kind of biochemical "noise" is beneficial, helping cells transform from one state to another, according to a new study led by a UT Southwestern Medical Center researcher.

Dr. GÃ¼rol SÃ¼el, assistant professor of pharmacology, said his research and that of his colleagues published today in the journal Science represents "a new paradigm," suggesting that rather than being bad for biology, cellular noise might have an important function, such as prompting stem cells to transform into a specific tissue type.

Electronic noise is an unwanted signal characteristic of all electrical circuits, typically caused by random fluctuations in the electric current passing through the components of a circuit. Similarly, within each living cell there are myriad "genetic circuits," each composed of a distinct set of biochemical reactions that contribute to some biological process. Randomness in those reactions contributes to biological noise, technically referred to as stochastic fluctuations.

"Noise in biological systems is a fact of life," said Dr. SÃ¼el, a member of the systems biology division of the Cecil H. and Ida Green Comprehensive Center for Molecular, Computational and Systems Biology at UT Southwestern. "Even though each cell may have the same set of genes turned on " the same hard-wired genetic circuit " there will still be slight variations in the amount of the various proteins those genes produce, some fluctuation in the amount of each circuit component. No two cells are alike in terms of their chemical composition."

Conventional scientific thinking has been that the random nature of such fluctuations within cells interferes with the reliable operation of biological systems. However, Dr. SÃ¼el's research team hypothesized that noise in one particular genetic circuit might be beneficial, linked to a process that controls cell fate.

To determine the biological role for noise, the researchers analyzed a genetic circuit that controls the transformation of bacteria cells from one state to another. This process, called differentiation, is akin to that used by human stem cells to change into a specific tissue type.

In a series of theoretical calculations and actual experiments, the researchers found that the particular circuit they investigated appears to have evolved in this bacterium to amplify cellular noise. Dr. SÃ¼el and his colleagues determined that by dampening the noise level within the bacterial cells, they could prevent the cells' transformation between states, essentially "tuning" cellular behavior.

"The amplitude of cellular noise correlates with the probability of triggering differentiation," Dr. SÃ¼el said. "This is experimental evidence that a genetic circuit utilizes noise to drive a biological process."

Typically, scientists examine genes and proteins individually to try to determine their functions within a cell. However, Dr. SÃ¼el said that's like examining each capacitor or switch in an electrical circuit in an attempt to understand the function of the electrical device in which the circuit is housed.

"Our research provides a systems-level view of how gene circuits work as a whole," he said.

Dr. SÃ¼el said the next step in his research would be to uncover the theoretical design principles of genetic circuits and what role interactions between distinct circuits play in regulating complex biological processes, such the differentiation of multipotent stem cells.

Dr. SÃ¼el, who earned his doctorate in molecular biophysics from UT Southwestern, carried out much of the work for the Science paper while a postdoctoral research fellow at the California Institute of Technology. He joined the UT Southwestern faculty in November and is an Endowed Scholar in Biomedical Research.

Other co-authors on the Science paper are Rajan Kulkarni and senior author Michael Elowitz, both of Caltech; Jonathan Dworkin of Columbia University; and Jordi Garcia-Ojalvo of the Universitat Politecnica de Catalunya in Spain.

The work was funded in part by the National Institutes of Health, the Searle Scholars Program and the Human Frontier Science Program.

UT Southwestern Medical Center, one of the premier medical centers in the nation, integrates pioneering biomedical research with exceptional clinical care and education. Its nearly 1,500 full-time faculty members " including four active Nobel Prize winners, more than any other medical school in the world " are responsible for groundbreaking medical advances and are committed to translating science-driven research quickly to new clinical treatments. UT Southwestern physicians provide medical care in 40 specialties to nearly 92,000 hospitalized patients and oversee 1.7 million outpatient visits a year.