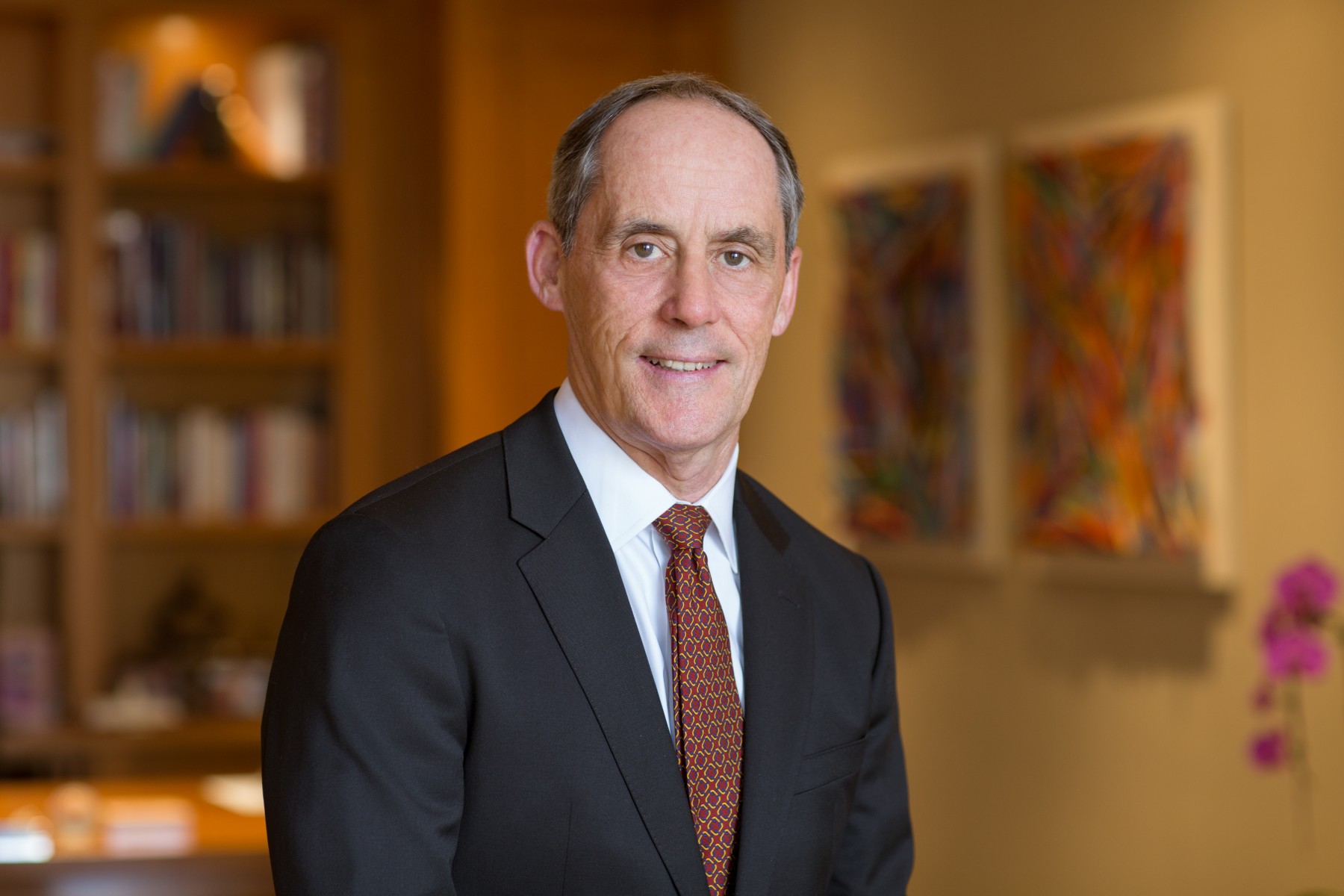 LOS ANGELES (Dec. 11, 2020) -- For Cedars-Sinai's longstanding commitment to providing medical care and other support to survivors of the Holocaust, President and CEO Thomas M. Priselac has received the Outstanding Humanitarian Award from the American Society for Yad Vashem-Western Region.

The award was given Dec. 2 at the Los Angeles Virtual Gala held by the society, which supports the work of Yad Vashem, the World Holocaust Remembrance Center, in Jerusalem.

Priselac called the recognition "a very special honor" and said: "From our perspective at Cedars-Sinai, it's impossible to adequately express in words the positive contributions that survivors of the Holocaust have made to our lives and our institution.

"Their character and influence are in the fabric of our organization. My own experience with our survivors has been life-changing. Without fail, in every encounter and every conversation, the qualities I've mentioned have been present in their words and deeds. I owe each of them a debt of gratitude for the example they've set and the inspiration they've given me."

"In an era," Priselac added, "when the world often seems preoccupied with the news of the day, there's an immense power and courage in the act of remembering. In that regard, no organization has done more than Yad Vashem, and I am sincerely grateful."

The award was presented to Priselac by Vera Guerin, former chair of the Cedars-Sinai Board of Directors.

"A very important and welcome part of the Cedars-Sinai family for close to 40 years has been hundreds of Holocaust survivors in need of medical care and supportive services provided by the medical center," Guerin said. "As a leader and humanitarian, Tom has made certain that quality care was extended to this population with dignity and grace, reflective of our mission and sincere commitment to the most vulnerable in our community."

Several other speakers also paid tribute to the work of Priselac and Cedars-Sinai, including Barbra Streisand, the singer, actress, director, social activist and philanthropist who also is a Cedars-Sinai trustee. She called Cedars-Sinai "one of the crown jewels of the Los Angeles community, a world-class health and medical research center."

"Quietly and without much fanfare, Tom [Priselac] has made sure that Holocaust survivors are provided with medical and psychological services they need to ensure a quality of life that they so richly deserve. The impact of this help is immeasurable," Streisand said.

Geiderman, who noted that his mother survived the Holocaust, said he "felt a deep kinship" with patients that he learned were Holocaust survivors. "I learned so much from their resilience and strength," he said. "They gave me much more than I gave them. They're part of the fabric of our hospital, and it's been a gift and an honor to know them and to care for them."

Priselac was one of three people receiving awards at the virtual event, which was called "Resilience 2000." One of the other recipients-Todd Morgan, a lifetime trustee of Cedars-Sinai-was given the Philanthropic Achievement Award, which was presented by his wife, the actress Rosanna Arquette.

The honor reflected Morgan's role as the creator of the Morgan Aging With Dignity Fund. It was set up to aid Holocaust survivors living below the poverty line with financial support for food, clothing, medical bills and shelter. In 2018, Morgan, the chairman of Bel Air Investment Advisors, received Cedars-Sinai's Philanthropic Leadership Award.

The night's remaining honor, the Legacy Award, went to Susanne Czuker, a Holocaust survivor and a founding benefactor of Yad Vashem.

The program included videos of individual Holocaust survivors providing recollections of their life stories. There also was an array of celebrities who appeared, including actors from families including Holocaust survivors. The night's emcee was the actor Michael Zegen, who played the character Joey Maisel in the TV series The Marvelous Mrs. Maisel, and whose maternal grandparents were Holocaust survivors.

Another special guest, who spoke shortly after Priselac, was Gal Gadot, the Israeli actress who starred in the movie Wonder Woman. Gadot, whose grandfather survived the Holocaust, called Yad Vashem "the most important institution in the world for Holocaust remembrance and education."

The American Society for Yad Vashem was created in 1981 by Holocaust survivors to support Yad Vashem, Israel's official Holocaust memorial in Jerusalem. It's a hallowed institution that world leaders regularly visit when in Israel.

Yad Vashem was established in 1953 by an act of the Israeli Knesset, or Parliament. It usually is visited by one million people each year. Its role includes commemorating, documenting, researching and providing education about the Holocaust-the murder of six million European Jews during World War II by the Nazis and their collaborators.

Yad Vashem's 45-acre campus on the Mount of Remembrance consists of museums, research and education centers, monuments and memorials. Those include the Museum Complex, the Hall of Remembrance, the Valley of the Communities and the Children's Memorial.